Agüero has been directly involved in 27 goals this season (18 goals, nine assists), just one fewer than Sterling’s total but the Argentine has played over 200 fewer minutes. The forward may well be fresher for the double gameweek, having not been selected to feature for his country over the international break.  He started in each of Man City’s last eight league matches (gameweeks 23 to 30), delivering eight goals and two assists and no player provided more Fantasy Premier League (FPL) involvements (10) across that spell. Similarly, no player took more goal attempts (28), shots on target (SoT) (14) or was involved in as many ‘big chances’ (10) as Agüero during that period. The Champions have scored 11 goals over the last six gameweeks and only Arsenal (12) and Liverpool (14) have managed more, both of which played at least one additional match. The Cityzens created a chance every 4.9 minutes, the best in the league. Their opponents Fulham have conceded 15 goals in the same period, allowing opponents 30 SoT, the worst in the league for both metrics. Their midweek opponents Cardiff have not fared much better, conceding 11 goals and allowing 25 SoT. Our Fix Algorithm backs Aguero to prosper this week with a point score of 16.2.

Hazard comes into the double gameweek with good momentum, having scored three times across two games for Belgium over the international break. As the Custom Stats table shows, the 28-year-old has 24 FPL involvements to his name this season (13 goals, 11 assists) and returned 33 points in the reverse fixtures against Cardiff and Brighton. Amongst midfielders, his total of three goals across Chelsea’s last six league matches (gameweeks 25 to 31) ranks joint-fourth best, behind only Deulofeu (four), Sterling (five) and Mané (seven). 11 SiB by the Belgian can only be bettered by Sterling (12), Salah, Mané (each 15) and H. Barnes (16). The Blues have attempted 82 shots over the last six gameweeks, only Liverpool (95), Newcastle (99) and Leicester (107) attempted more, all having played two more matches. Their first opponents Cardiff have conceded 11 goals over the same period, allowing 41 SiB. Brighton conceded six goals in the same time frame, allowing 31 SiB and 15 SoT. Our Fix Algorithm projects a point score of 12.0 for the Belgian.

Having now retired from international football, D. Silva should be well-rested for the double gameweek, while B. Silva, Sané, Sterling and Mahrez have all featured for their countries. The Spaniard has started in six of the last seven league matches, including back-to-back starts in Man. City’s previous double gameweek (gameweek 25) and no player has provided more than his four assists during that period (gameweeks 24 to 30). As the Custom Stats table shows, his total of 16 attempted assists ranks joint-fourth amongst midfielders during that period, with only Groß (18), Moutinho (21) and Maddison (27) producing more. 12 SiB by the 33-year-old was on par with Sterling and only Salah (13), H. Barnes (15) and Mané (16) fired more from midfield. Man. City have landed 30 SoT over the last six gameweeks, with only Newcastle (31), Leicester (31) and Liverpool (34) managing more, but have achieved this having played two additional games. The Manchester club have also created 20 ‘big chances’, just one less than Liverpool’s 21. Fulham are the league’s worst team for allowing opponents the most shots (104), SiB (73) and SoT (39). The Cottagers have also conceded 13 ‘big chances’. And once again, their midweek opponents Cardiff have been generous to the opposition, allowing 14 ‘big chances’, the fifth-worst in the league. Our Fix Algorithm backs the playmaker to get attacking returns, with a point score of 12.7.

Jiménez has been directly involved in 20 Premier League goals this season (12 goals, eight assists) and comes into the double gameweek in fine form, having returned six goals and two assists across his last eight matches. As the Custom Stats table shows, during that period (ganeweeks 23 to 30) only Agüero had more FPL involvements (10 to eight), and it was only Newcastle’s Rondón (26) and Agüero (22) who managed to fire more than the Mexican’s 21 SiB amongst forwards. The 27-year-old recorded seven 'big chances' across the same time frame and only Lukaku (eight), A. Barnes and Agüero (each 10) were the forwards who were involved in more. Wolves have attempted 54 shots over the last six gameweeks, landing 15 SoT, and only five teams have created more ‘big chances’ than their 13. Burnley have conceded 13 goals in the same period, keeping no clean sheets. They have allowed opponents 88 shots, with only Bournemouth (89), West Ham (101) and Fulham (104) performing worse. Their second opponents Man. United have only conceded five goals over the aforementioned period, but have kept just one clean sheet. Our Fix Algorithm projects a point score of 8.2 for the Mexican. 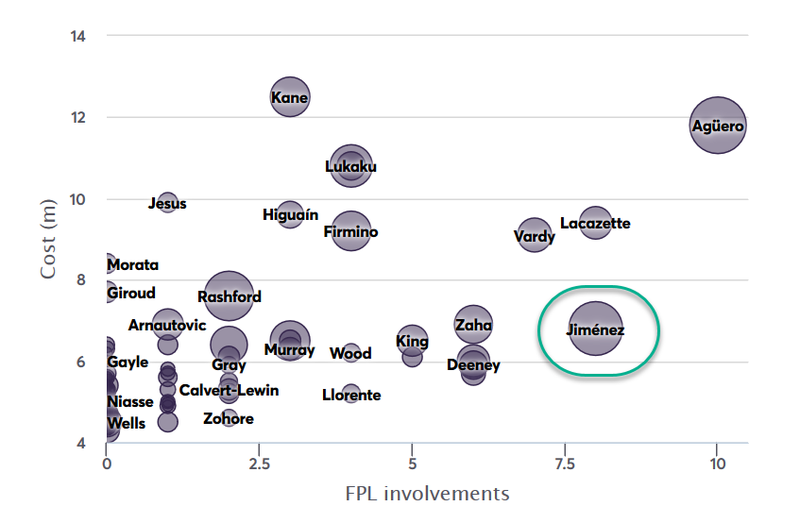 Having played every minute in the Premier League so far this season, Azpilicueta appears more assured of game time in the double gameweek than his Chelsea teammates. Although D. Luiz and Rüdiger have been the preferred centre-back pairing, Christensen offers Sarri a possible rotation option, having made three league starts already. Meanwhile, the Spaniard has played a hand in each of his team’s 12 clean sheets and only van Dijk and Robertson (each 16) have recorded more, amongst defenders. He has delivered three assists across Chelsea’s last six matches (gameweeks 25 to 31), a tally matched by only Alexander-Arnold, Robertson and Schlupp, with no defender registering more. Word of caution, these assists have come from a total of just three attempted assists, so he is not likely to keep up this level. Chelsea have only allowed opponents 53 shots and 32 SiB over the last six gameweeks, the fourth-lowest in the league for both statistics. Their first opponents Cardiff have managed only 55 shots in the same period, the sixth-lowest in the league. They are also fifth-worst for SiB (32) and SoT (18). Brighton’s attacking statistics also make for poor reading as they have attempted just 49 shots, with only Watford (32) attempting fewer. They are bottom of the league for both ‘big chances’ (four) and SoT (14). Our Fix Algorithm predicts a 91% possibility of at least one Chelsea clean sheet and a point score of 8.8 for the right-back. 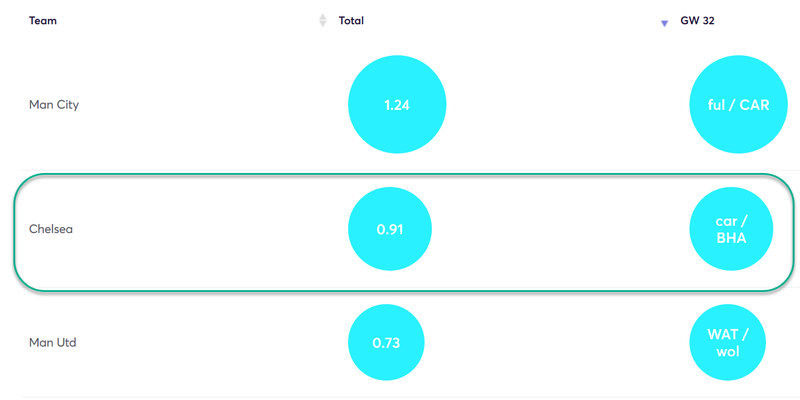