Chelsea dropped their first points since the restart against the Hammers, but their midfielders Willian (14 points) and Pulisic (eight points) still managed to rack up FPL returns. Using the Fix Heatmaps feature, the two are compared across the three gameweeks since the restart. A look at the Touch Heat Map indicates that the American is getting in more central areas and spending more time in the box compared to Willian, who is occupying more of a wide role on the right wing. Both have scored a similar number of points (26 to 22) but the Brazilian has been reliant on set pieces for his goals, with two penalties and one free kick. The penalties inflate his expected goals (xG) number (1.73) compared to Pulisic’s 1.22, with the American taking six SiB to his four. Willian is no doubt the more creative of the two, with 10 attempted assists to Pulisic’s two. Both look like excellent picks with the American slightly edging it due to his greater threat from open play.

Man. City have now scored 13 goals since the restart, five more than any other team. Their attackers are compared for the three gameweek period (GW30+-GW32+) using the Fix Comparison Matrix. It is immediately clear that De Bruyne is the jewel in the crown. The Belgian tops the comparison for minutes (279), FPL points (37), assists (two), shots (12), attempted assists (10) and xFPL points (33). Jesus numbers are quite poor considering he has played 218 minutes, the Brazilian has landed just two SoT and attempted just four assists, the lowest numbers across the board. This also explains why he also has the lowest xFPL score (eight). The midfielders are more difficult to split, Foden leads the way for SoT (six) with Mahrez and Sterling (three) some way behind. However, they both beat Foden in terms of creativity with six attempted assists compared to just four. In terms of xFPL it is close again with Sterling and Mahrez notching 21 each to Foden’s 17. Any of the three look like a great addition alongside De Bruyne, with the lower pricing of Mahrez (8.5) and Foden (5.3) making them more appealing than Sterling’s 11.7 price-tag. 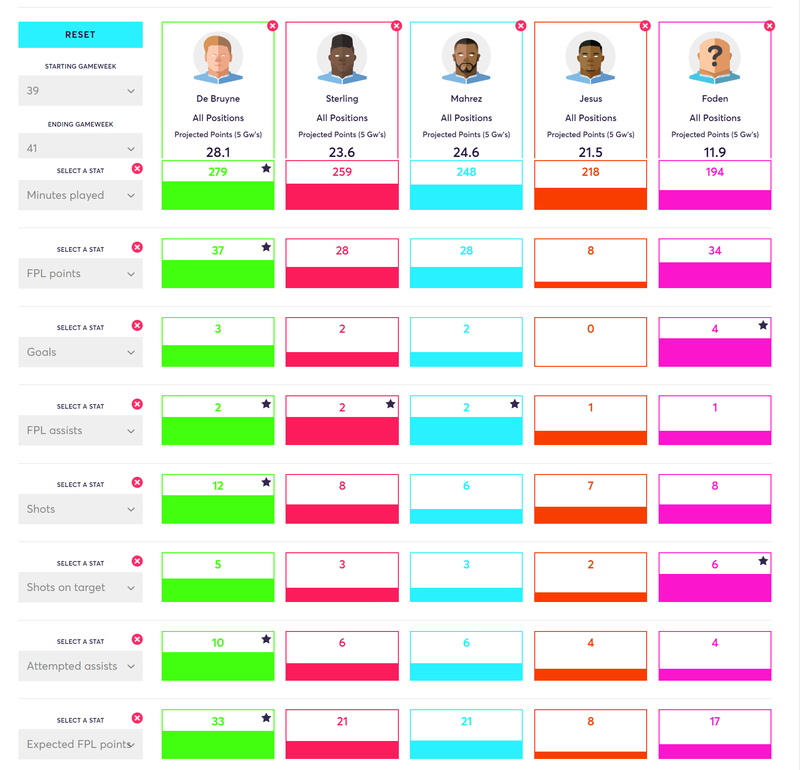