Caveat: The gameweeks added to Fantasy Premier League (FPL) for the re-launch are listed as GW31+, GW32+ and are referred to as GW40, GW41 respectively throughout the Fix website.
This blog was written prior to the matches on 21/6/2020

No midfielder has managed more goals over the last six gameweeks than Salah’s four and the Egyptian is also top for shots in the box (SiB) (16). Only B. Fernandes and Son have landed more shots on target (SoT) (10) than his eight. He has been creating quality chances as well, only Westwood, Mcneil, De Bruyne (all four) and Richarlison (six) have created more ‘big chances’ for teammates than his three. Liverpool have scored 66 goals this season, only Man. City have been more prolific (71). The league leaders only trail the Cityzens for SoT (173 to 201) and ‘big chances’ (89 to 107). Their opponents Palace have a good defensive record this season, only Man. Utd, Man. City (both 31), Leicester (29), Sheff. Utd (25) and Liverpool (21) have conceded fewer goals than the Eagles’ 32. They are ranked 10th for SoT conceded (130) and 11th for ‘big chances’ conceded (56). Our Fix Algorithm currently projects a point score of 6.7 for Salah.

Jiménez continued his good form from earlier in the season with a goal against West Ham and no forward has scored more goals than his three over the last six gameweeks. As the Stats Sandbox shows, he leads the way for shots (24) and SiB (19) while only Calvert-Lewin and J. Rodriguez (both seven) have been afforded more ‘big chances’ than his six. In terms of creativity, only Long (seven), Jota, Ings (both eight) and Benteke (11) have created more chances than his six. Wolves have scored 43 goals this season, only six teams have fared better. They are ranked fifth for ‘big chances’ created (71) with only Leicester (73), Chelsea (78), Liverpool (89) and Man. City (107) managing more. Their opponents Bournemouth have kept only four clean sheets this season, the fewest in the league. Only West Ham, Southampton (both 52), Norwich (55) and Villa (56) have conceded more goals than the Cherries’ 49. Our Fix Algorithm projects a point score of 5.3 for the Mexican.

B. Fernandes continued his impressive start to life in the English top flight with a goal against Spurs, his third strike in the last six gameweeks. Only Salah (four) has been more prolific amongst midfielders. The Portuguese leads the way for shots (24), SoT (10) and also for assists (three) amongst midfielders over that period. Only Grealish (14) and Maddison (17) created more chances than his 13. He is the second most transferred in player this week as per our Transfer Stats feature. Man. Utd have scored 45 goals this season, only Spurs (48), Chelsea (51), Leicster (59), Liverpool (66) and Man. City (71) have notched more. They are ranked third for SoT (170), trailing only Liverpool (174) and Man. City (201). Sheff. Utd. have the league’s second best defensive record behind Liverpool (21), conceding only 25 goals. However, they are ranked 10th for ‘big chances’ conceded (54). Much of the Blades defensive solidarity has  has been as a result of D. Henderson’s impressive performances, who is ineligible to play this match as per the terms of his loan agreement (from Man. Utd.). The Bladesmen will also be without their ever-present centre-back pairing, Egan (suspended) and O’Connell (doubtful). Our Fix Algorithm currently projects a point score of 5.1 for Fernandes. 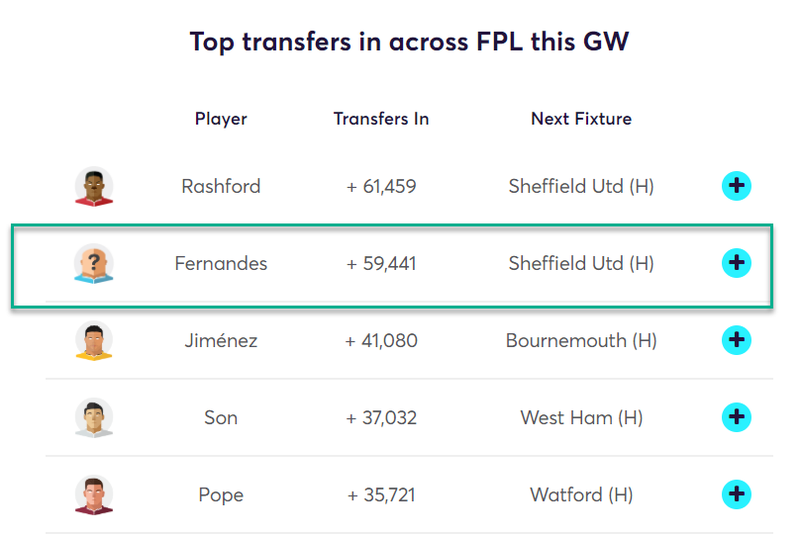