Caveat : The Captaincy picks are in the below format -

Despite only registering a goal and assist in the last six gameweeks, Salah features as the standout captain pick in this week’s blog as Liverpool look to get back to the top of the table with a win against Fulham. The Egyptian’s underlying stats are promising – he ranks second for shots amongst midfielders (23) with only H. Barnes faring better (24). He is also third for shots in the box (SiB) with 12, beaten only by Mané (13) and H. Barnes (17) and tops the table for shots on target (SoT) with 10. Liverpool have scored 13 goals in those six gameweeks, with only Man. City (16) scoring more. The Reds are also second for SoT (34) and ‘big chances’ (19), trailing only the Champions in both metrics. The Fulham defence continues to be abysmal, conceding 15 goals in their last six games, the worst in the league. They are also bottom of the table for shots conceded (105), SiB conceded (75) and SoT conceded (39). Our Fix Algorithm backs the Egyptian to get back on the scoresheet with a point score of 7.4.

Wilson got off to a flyer on his comeback in gameweek 30, with a goal and assist against Huddersfield. This takes the Cherries’ man total to 11 goals and nine assists for the season, a total of 20 Fantasy Premier League (FPL) involvements. Prior to his injury, Wilson had created 18 chances in 11 home matches and as the Custom Stats table shows, no forward has created more ‘big chances’ on home turf than his nine. His total of four assists at home is also top amongst forwards. He has taken 27 SiB in those games, landing 13 SoT, and five of his 11 goals have come at the Vitality Stadium. The Cherries have been particularly prolific on their own patch, scoring 26 goals over 15 matches, the sixth-highest in the league and only four teams created more ‘big chances’ on home turf than the Cherries’ 39. Newcastle have conceded six goals in their last four away matches, keeping no clean sheets. They have allowed opponents 63 shots, 18 SoT, and only four teams have allowed more ‘big chances’ than their 14. Our Fix Algorithm projects a point score of 3.8 for the Englishman.

With the new manager bounce truly in effect at Leicester, Vardy is arguably the league’s form player, with four goals in as many games, a statistic that ranks him joint-top for forwards over that period. He is ranked seventh for SiB with nine and has scored from all four of his SoT. He has also created five chances, with only Kane (six), Perez (nine) and Rondon (11) creating more amongst forwards. Leicester have scored eight goals in the last six gameweeks and are top for shots over that period with 115. They trail only Man. City (77) for SiB having managed 65. Their total of 33 SoT can only be beaten by Liverpool (34) and Man. City (46). Their hosts Burnley have conceded 12 goals in their last six league matches and only Fulham have let in more with 15. They are fifth-worst for shots conceded with 89 and have conceded an average of two ‘big chances’ a game over that period. Our Fix Algorithm backs Vardy to keep delivering with a projected score of 4.5. 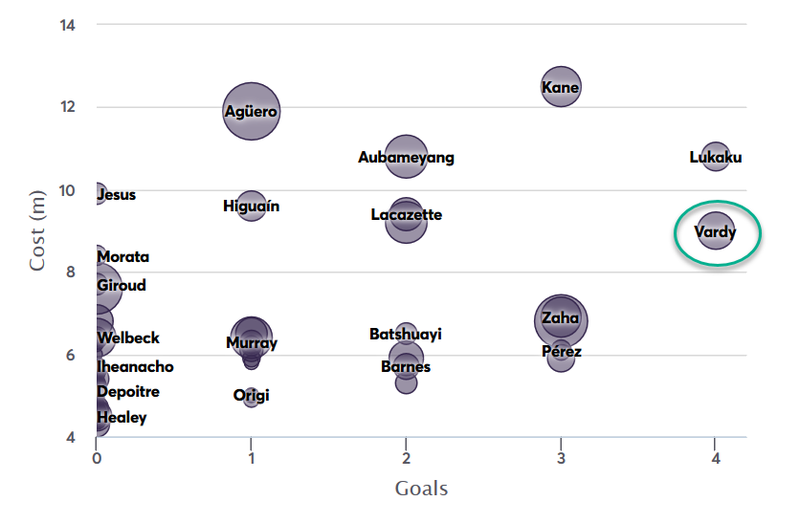