Salah was back amongst the goals in a dominant 3-0 win over Arsenal last gameweek, before adding to his season total against Real Madrid after scoring midweek. Over the last five gameweeks, the Egyptian king ranks joint-first amongst midfielders for ‘big chances’ (four), while only Mahrez (11) has fired more than his 10 shots in the box (SiB). Only Raphinha (34) and Mahrez (38) can better his 32 touches in the opposition’s box. The Reds are ranked second on the Fixture Analyzer for the next three weeks so it is a good time to bring in the Egyptian. Liverpool have scored six goals in the last six gameweeks, only Brighton (54), Leeds (67) and Man. City (76) have taken more SiB than their 53 over that period. Their total of 16 ‘big chances’ is bettered only by Everton (17) and Man. City (22). Villa have conceded seven goals over the same period, keeping just two clean sheets. They are ranked 14th for both shots conceded (84) and shots on target (SoT) conceded (27). Our Fix Algorithm currently projects a point score of 6.5 for Salah.

After netting twice against Newcastle last Sunday, Kane now has five goals and two assists in the last four gameweeks, where he has averaged 10.3 points per game (PPG). As our Stats Sandbox shows, no player in any position can better his tallies of 11 SiB, eight SoT and five ‘big chances’. Only De Bruyne (1.24), Raphinha (1.57) and Vardy (1.86) have racked up more than his 1.08 expected assists (xA) figure. Spurs have scored 15 goals over the last six gameweeks, only Man. City (17) have been more prolific. Only Everton (17) and Man. City (22) have registered more ‘big chances’ than their 16. Man. Utd have conceded just two goals over the last six gameweeks, keeping four clean sheets. However, the Red Devils are ranked just 10th for shots conceded (71) and eighth for SoT conceded (23) which indicates Kane should still get plenty of opportunities. Our Fix Algorithm currently projects a point score of 5.3 for Kane.

With a goal and assist on his return to action last weekend, Ings has improved his average points to 5.4 per 90 minutes this season. As our Player Heatmaps feature shows, the 28-year-old has bagged two goals and two assists in seven appearances against the ‘bottom six’. On a per 90 minutes basis, he has averaged 0.56 expected goals (xG) against those sides, compared to his overall season average of 0.37. Southampton have scored nine goals over the last six gameweeks, only West Ham, Leicester (each 11), Spurs (15) and Man. City (17) have found the back of the net more often. They have landed 32 SoT, only Leeds (35), Chelsea (37) and Man. City (43) have managed more. West Brom have conceded just four goals in the last six gameweeks, keeping three clean sheets. However, they are ranked 12th for SoT conceded (26) and 14th for ‘big chances’ conceded (13) which indicates they have been a bit fortunate. Our Fix Algorithm currently projects a point score of 5.0 for Ings.

Following his sensational solo goal against Wolves, Lingard is now averaging 8.5 PPG since joining West Ham on-loan in gameweek 22. The Englishman trails B. Fernandes by just a single point in that time (69 to 68) and the pair rank joint-first amongst midfielders for SoT (14). Only Salah (18) and Raphinha (19) have taken more SiB than the Englishman’s 15 and only four midfielders can better his 3.20 xG figure. He is the second most transferred in player this gameweek as per our Transfer Stats feature. West Ham have scored 11 goals over the last six gameweeks, only Spurs (15) and Man. City (17) have fared better. The Hammers have fashioned 15 ‘big chances’ over that period with only Liverpool, Spurs (each 16), Everton (17) and Man. City (22) registering more. Leicester have conceded eight goals over the last six gameweeks, keeping just one clean sheet. The Foxes are ranked fifth for shots conceded (54) and eighth for ‘big chances’ conceded (11). Our Fix Algorithm currently projects a point score of 5.0 for Lingard. 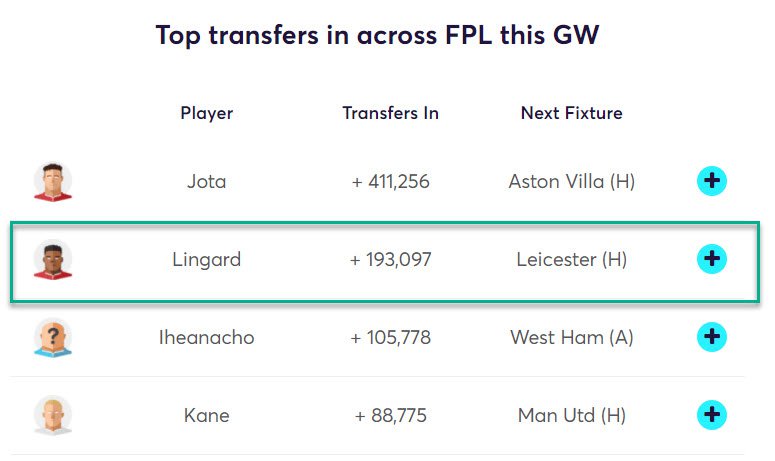 Alexander-Arnold did not have the best of nights against Real Madrid midweek but only Shaw (37) has earned more than his 33 Fantasy Premier League points in the last five gameweeks, amongst defenders. The 22-year-old ranks first amongst players in his position with totals of four big chances created, 14 attempted assists and 11 successful crosses. Meanwhile, only Dallas (seven) has fired more than his five shots in open play. Liverpool have conceded just four goals over the last six gameweeks, keeping three clean sheets. Only Man. Utd (two) have been more frugal. They have allowed opponents just 35 SiB over those matches, only Leicester (34), Brighton (27) and Chelsea (23) have fared better. Villa have scored just six goals over the same period, only Palace, Wolves, Newcastle, Fulham and Sheff. Utd (all five) have fared worse. Only West Brom, Arsenal (each 18), Palace (15) and Sheff. Utd (nine) have landed fewer SoT than their 22. Our Fix Algorithm currently projects a 40% chance of a Liverpool clean sheet and a point score of 5.1 for the right-back.