Pulisic tops the Custom Stats table for gameweek 31 with an xFPL score of 12.5. The American took three shots in the box (SiB), two of which were ‘big chances’ and also attempted four assists. His teammate Havertz comes in second with an xFPL score of 9.8, no player was afforded more ‘big chances’ (three) than the German and he also led the way for shots on target (SoT) (four). Meanwhile, no player took more shots (seven) or SiB (six) than Salah this gameweek, the Egyptian landed just two of these attempts on target, notching an xFPL score of 9.0. Alexander-Arnold (three) trailed only Zinchenko (five) for chances created amongst defenders. The right-back also took three shots and registered an xFPL score of 8.1.

Leicester’s Nigerian forward Iheanacho notched a brace against West Ham taking his total to five goals over the last four gameweeks. Using the Fix Heatmaps feature, his numbers are compared to his strike partner Vardy over that period. Vardy has scored zero goals to Iheanacho’s five and has half the expected goals (xG) (1.26 vs 2.51), indicating that the Nigerian is shooting more and getting better quality chances as well. The underlying numbers back it up, Iheanacho is ahead on shots (seven vs. 12), SoT (three vs. seven) and SiB (five vs. eight). The only category where Vardy is a clear winner is ‘big chances’ created (four vs two) which indicates the Englishman has taken on more of a creative role in recent weeks. Iheanacho, is without a doubt the clear winner in comparison to Vardy and the Englishman therefore does not look worth the extra Fantasy Premier League (FPL) cash, presently.

Popular defender Cresswell suffered an injury against Leicester which is likely to mean a time on the sidelines for the left-back. The popular replacement options are compared using our Fix Comparison Matrix for the last four gameweeks. Alexander-Arnold appears to be the standout option, the right-back tops the comparison for FPL points (32), goals (one), shots (four), SoT (two), attempted assists (10) and ‘big chances’ created (three). He trumps his teammate Robertson in every category. Coufal is also a good like-for-like replacement for Cresswell, the Czech Republic international leads the comparison for assists (two) and is second only to Alexander-Arnold for chances created (six). Finally, Azpilicueta has only created three chances and does not offer much besides clean sheet potential. 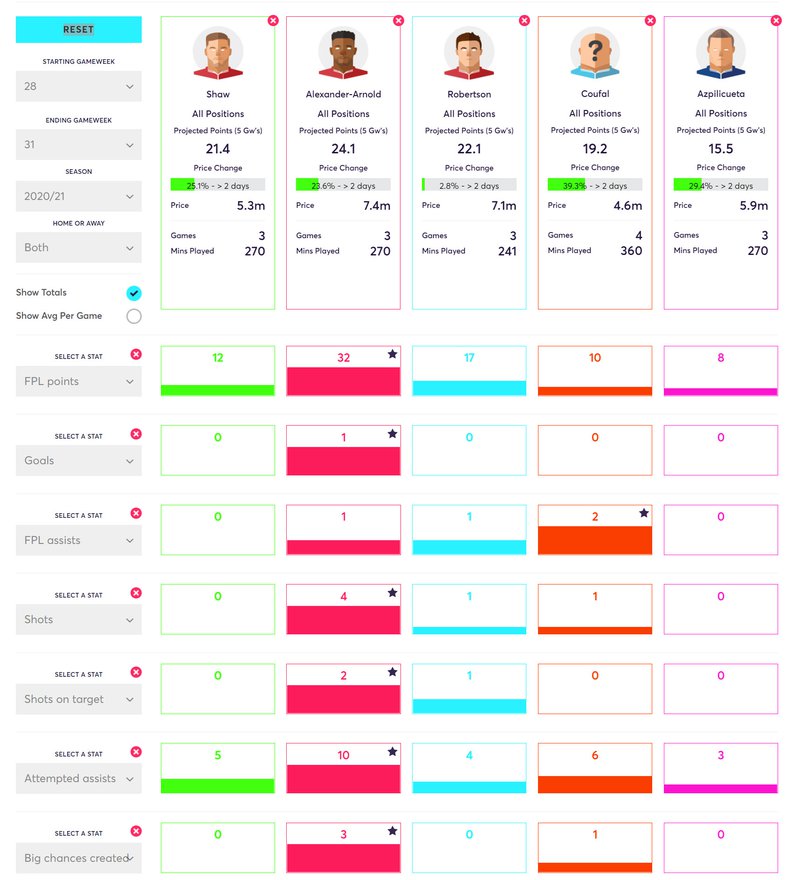