De Bruyne is back in training with the Man. City squad and is expected to be available for the visit of Burnley this weekend. The Belgian has registered a goal and assist over the last four gameweeks, despite making just three appearances. He landed three shots on target (SoT) and created eight chances over this period, only Maddison and B. Fernandes (both 11) created more amongst midfielders with two of these deemed ‘big chances’. Man. City have only scored four goals over the last three gameweeks, creating eight ‘big chances’. They are ranked seventh for SoT (18) despite playing a game less. Their opponents Burnley have conceded just two goals over the same period but the underlying numbers indicate they have been fortunate. Only five teams allowed opponents more shots than the Clarets’ 56. Our Fix Algorithm projects a point score of 6.4 for the Belgian.

Salah scored his second goal in the last four gameweeks with his strike against Bournemouth in gameweek 29, only Mané and Martial (both three) have scored more amongst midfielders over that period. As the Stats Sandbox shows, he leads the way for shots in the box (SiB) and SoT (six). Liverpool have scored six goals over the last four gameweeks, only Spurs (seven), Man. Utd, Chelsea and Arsenal (all eight) have been more prolific. Their total of 63 shots is beaten only by Chelsea (74) and only Man. Utd (22), Burnley (24) and Chelsea (25) have landed more SoT than their 20. Their local rivals Everton have conceded nine goals over the same period, the worst in the league. Only Villa (26) and Bournemouth (27) allowed opponents more SoT than their 22. Our Fix Algorithm projects a point score of 5.5 for Salah.

With two goals and three assists in the last four gameweeks, B. Fernandes has wasted no time in adapting to the rigours of the Premier League with only Martial and Mané (three) scoring more goals amongst midfielders over that period. Only Richarlison (15) has taken more shots than his 14 and he is top for chances created (11). No midfielder registered more assists than his three over the aforementioned period. The Portuguese is already the most transferred in player this week as per our Transfer Stats feature with almost 100,000 managers bringing him in. Man. Utd are top for goals scored (eight) over the last four gameweeks and only Wolves (59), Liverpool (63), Chelsea (74) have taken more shots than their 56. Only Burnley (24) and Chelsea (25) landed more SoT than their 22. Spurs have been woeful of late with only Bournemouth, Everton, Villa (all nine) conceding more goals than their eight. No team allowed opponents more shots than their 70 and only Southampton, Bournemouth (both 13) and Villa (16) conceded more ‘big chances’ than their 12. Our Fix Algorithm projects a point score of 3.4 for the Portuguese. 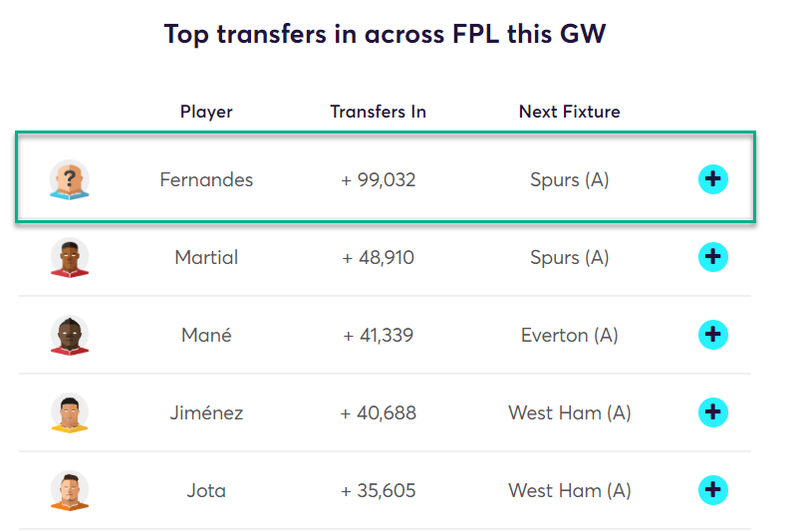