B. Fernandes has averaged 8.5 points per game (PPG) at home during this calendar year, with four goals and three assists in six matches. In that time (gameweek 17 to 29), no player has taken more shots on home turf (24) and no midfielder has recorded a higher expected goals figure (3.38). He also ranks top for attempted assists (24), while only Vardy can equal his five ‘big chances’ created. The Portuguese is the second-most transferred in player this week as per our Transfer Stats feature. Man. Utd have scored seven goals over the last six gameweeks, only six teams have managed more. Leeds (32), Leicester (33), Brighton (34), Chelsea (35) and Man. City (52) are the only teams to have landed more shots on target (SoT) than their 28. Brighton have conceded six goals over the same period, keeping just two clean sheets. The Seagulls have posted impressive defensive numbers, ranking first for shots in the box (SiB) conceded (19) and second for ‘big chances’ conceded (four). Our Fix Algorithm currently projects a point score of 6.9 for B. Fernandes. 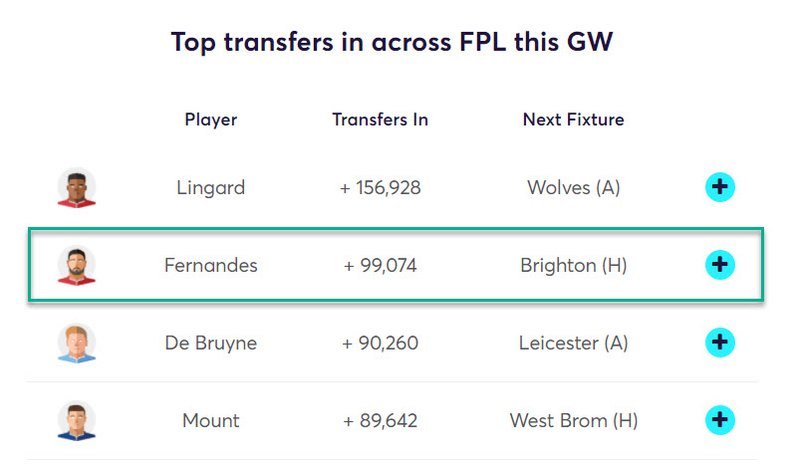 No forward has picked up more points than Kane in the last five gameweeks, with 38, at an average of 6.3 PPG. The England captain has produced league-leading totals of 14 SiB and nine efforts on target, while only Iheanacho (seven) has had more ‘big chances’ than his five. Meanwhile, Watkins (three) and Vardy (four) have created more ‘big chances’ than his two, amongst players in his position.  The Lilywhites are top of the Fixture Analyser for the next three gameweeks, and have been given a double gameweek in 32. Spurs have scored 13 goals over the last six gameweeks, only Arsenal (13), Leicester (14) and Man. City (21) have been more prolific. Their total of 13 ‘big chances’ is only bettered by West Ham (15), Leicester (18) and Man. City (23). Newcastle have conceded 10 goals over the last six gameweeks and only Sheff. Utd (13) and Southampton (14) have shipped more. They are ranked 13th for shots conceded (86) and 14th for ‘big chances’ conceded (13). Our Fix Algorithm currently projects a point score of 5.7 for Kane.

Having notched two goals in the last five gameweeks, Raphinha has averaged 4.5 PPG as per our Fix Heatmaps feature. No midfielder has landed more than his six SoT in that time, while only De Bruyne has fired more shots in total (16 to 15). The Brazilian has provided a league-best 21 attempted assists during this time period, with only Son (six) creating more ‘big chances’ than his five. Leeds have scored seven goals over the last six gameweeks and only six teams have fared better. Their total of 59 SiB can only be bettered by Brighton (64) and Man. City (88). Sheff. Utd have shipped 13 goals over the last six gameweeks and only Southampton (14) have been more porous. Meanwhile, Wolves (63) are the only team to have allowed opponents more SiB than their 63. Our Fix Algorithm currently projects a point score of 5.2 for Raphinha. 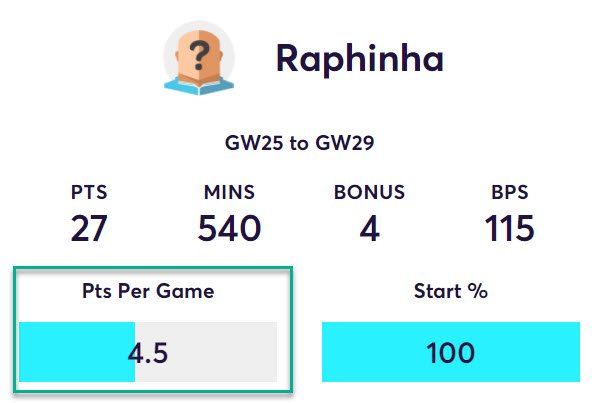 Calvert-Lewin ended a run of three matches without a return against Burnley in his last Premier League outing, before netting a brace for England on international duty. The 24-year-old has been afforded four ‘big chances’ in the last four gameweeks, ranking just behind Kane (five) and Iheanacho (seven) amongst forwards, as per our Stats Sandbox feature. Just five players in his position can better his eight SiB, during that period. Everton have conceded six goals over as many gameweeks and are ranked ninth for ‘big chances’ (12). Palace have conceded eight goals over the same period and only six teams have conceded more. Meanwhile, Sheff. Utd (62) and Wolves (63) are the only two sides to have allowed opponents more SiB than Palace's 59. Our Fix Algorithm currently projects a point score of 5.5 for the Englishman.

Dallas has averaged 4.8 PPG at Elland Road this season, having landed five clean sheets, three goals and one assist in 14 matches. No defender can better his 1.73 expected goals (xG) figure at home, while only Alexander-Arnold (17) and Maguire (18) have fired more than his 16 shots. Semedo (eight), is the only player to have landed more than his six SoT. Leeds haven't been too bad at the back of late, conceding just nine goals over the last six gameweeks, and managing two clean sheets. They are ranked 15th for SiB conceded and 11th for ‘big chances’ conceded (11). Sheff. Utd’s poor attacking numbers offer plenty of reason for optimism. The Blades have scored just one goal over the last six gameweeks while only Palace (23) have taken fewer SiB than their 25. Our Fix Algorithm currently projects a 50% chance of a Leeds clean sheet and a point score of 4.9 for Dallas.