Caveat: The gameweeks added to Fantasy Premier League (FPL) for the re-launch are listed as GW30+, GW31+ and are referred to as GW39, GW40 respectively throughout the Fix website.

Agüero has largely been Guardiola’s preferred striker at the Etihad this season, featuring in 11 of 13 home matches and starting on nine of those occasions. He has notched eight goals and two Fantasy Premier League (FPL) assists across those games, while ranking top amongst teammates with 35 shots in the box (SiB) as per our Stats Sandbox feature and an Expected Goals (xG) of 6.8. Only Sarr (7.9), De Bruyne (8.1), Mané (8.5) and Salah (9.1) can better his average of 7.6 points per 90 minutes during home matches (amongst those with a minimum of 500 minutes played). In the last six gameweeks (prior to the league’s suspension), Man. City were ranked fifth for shots in the box (SiB) (53) behind Leicester (55), Wolves (61), Chelsea (63) and Liverpool (68). Only Chelsea, Wolves (both 16), Burnley (18), Liverpool (19) and Everton (20) have created more ‘big chances’ than their 15. Man. City's first opponents Arsenal have allowed opponents 50 SiB over the last six gameweeks and only seven teams fared worse. The Gooners have allowed 16 ‘big chances’ and only Bournemouth, Spurs (both 17), West Ham (18), Southampton (20) and Villa (23) have given up more. Their next opponents Burnley have conceded only two goals over the same period but were fifth-bottom for shots conceded (93), indicating they were a bit fortunate. Only Norwich (94), Spurs (102), Bournemouth (107) and West Ham (115) have allowed the opposition more attempts. Our Fix Algorithm currently projects a point score of 10.7 for the Argentinian.

No teammate has earned as many minutes as De Bruyne at the Etihad this season (1033), where he has amassed five goals and nine FPL assists in 12 appearances to average 7.8 points per game. Totals of 57 attempted assists and 13 ‘big chances’ created during home matches rank the Belgian top amongst all players, while only Mané (109) and Salah (124) have returned more than his 93 FPL points. The Egypt international (56) is the only midfielder to have taken more than De Bruyne’s 43 shots at home. The Belgian is currently the most owned player in FPL at 47.8% ownership as per our FPL Statistics feature. The defending Champions have scored 33 goals in 13 home matches this season, only Liverpool (40) have been more prolific on home turf. The Cityzens are top for shots (281), SiB (192) with only Chelsea (49) and Liverpool (51) creating more ‘big chances’ than their 47. Arsenal have conceded 16 goals in 13 away games this season, keeping just three clean sheets. They have allowed opponents 58 shots on target (SoT), almost five per game. City's next opponents Burnley have conceded 21 goals on their travels keeping just four clean sheets. Only seven teams have allowed opponents more shots than the Clarets' 219. Our Fix Algorithm currently projects a point score of 11.0 for De Bruyne. Grealish has averaged 5.1 points per game at Villa Park this season, where he has found eight of his 14 FPL involvements (three goals, five assists). Amongst midfielders, only Mané (six) and De Bruyne (nine) have picked up more than his five FPL assists on home turf, with his total of 45 attempted assists only beaten by the Belgian playmaker (57). Only El Ghazi (12) has fired more than his 10 efforts on target at home, amongst teammates. The Englishman is the most transferred in player this week as per our Transfer Stats feature. Villa have scored 18 goals in 13 home games this season, landing 56 SoT, an average of over four a game. They took a total of 116 SiB across those matches, an average of just under nine. The Villans first opponents Sheff. Utd. have conceded 12 goals on their travels this season, keeping just four clean sheets. They have allowed opponents 28 ‘big chances’, an average of over two a game. Their second opponents Chelsea have kept just one clean sheet on the road, conceding 24 goals and 27 ‘big chances’. Our Fix Algorithm currently projects a point score of 6.3 for Grealish. 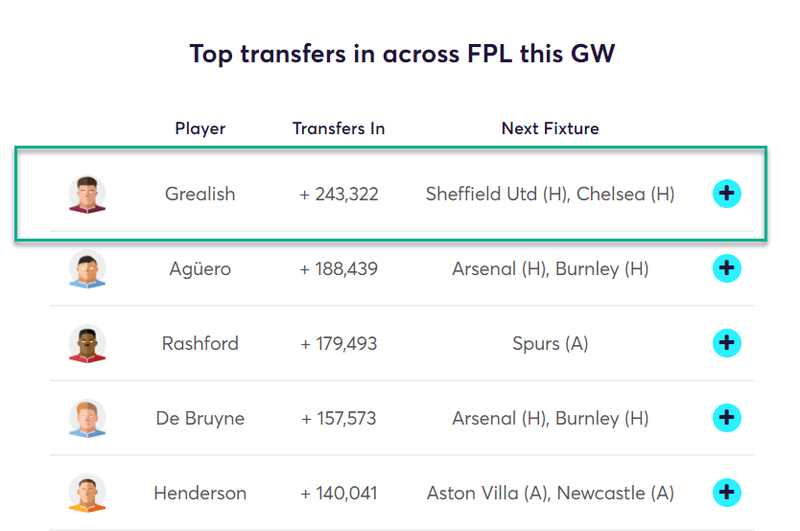 With five goals in nine matches this calendar year (GW21-29), no FPL forward has amassed more points than Jiménez (43). He ranks top amongst players in his position with a total of 11 ‘big chances’ during that period, while only Firmino (29) has fired more than his 28 SiB. Only Salah (38) has taken more shots than the Mexican (36) in total, across all positions. Only Norwich have a better fixture schedule than the Midlands side as per our Fixture Analyzer which makes Jiménez a great long term pick. Wolves have scored seven goals in the last six gameweeks prior to the hiatus and were ranked third for SiB (61) behind Chelsea (63) and Liverpool (68). Only Liverpool (19) and Everton (20) have crafted more ‘big chances’ than Wolves' 18, and no team has conceded more goals (16) or SiB (76) than the Hammers over the aforementioned period. In fact, only Southampton (20) and Villa (23) have allowed more ‘big chances’ than the Hammers' 18. Our Fix Algorithm currently projects a point score of 4.5 for the Mexican.

Only three FPL defenders have picked up more points on the road than Baldock, with the right-wing-back amassing four clean sheets, two goals and two assists in 13 away matches. No Sheff. Utd. defender has fired as many as his three SoT during those matches, while only Lundstram (117) and Stevens (195) have completed more final third passes than the 27-year-old (86). Stevens (35) is the only player to have attempted more than his 27 crosses. The Blades have conceded just three goals in the last six gameweeks prior to the league’s suspension, and only Burnley (two) have conceded fewer. Man. City (13) are the only team to have conceded fewer SoT than their 16. Their first opponents Villa have scored just five goals over the same period and only Sheff. Utd (43), Norwich (41), Watford (40) and Arsenal (34) have taken fewer SiB than their 44. Meanwhile, no team has created fewer ‘big chances’ than Villa's six. Their next opponents Newcastle have managed just three goals over the same time frame, and only Norwich (two) have fared worse. The Magpies were fourth-bottom for ‘big chances’ created, trailing only Sheff. Utd (eight), Norwich (seven) and Villa (six). Our Fix Algorithm currently projects an 80% chance of at least one Sheff. Utd. clean sheet and a point score of 7.4 for the left-back.