Pep Guardiola has hinted at a return for De Bruyne against Burnley, in order for him to “get the rhythm of the team” ahead of their Champions League second leg tie with Real Madrid.  The Belgian was a big miss during the defeat to Man. Utd in gameweek 29, as evidenced by the five goal involvements he has amassed in his last six matches (one goal, four assists), between gameweeks 22 and 27. As the Stats Sandbox shows, no player attempted more assists than his 23 over that period, while only Salah (six) created more than his five ‘big chances’. Man. City have scored four goals over the last six gameweeks but are ranked fifth for shots in the box (SiB) over that period with only Leicester (55), Wolves (61), Chelsea (63) and Liverpool (68) registering more. They are also ranked seventh for ‘big chances’ (15). Burnley have conceded just two goals over the same period but the underlying numbers indicate they have been a tad fortunate. Only Norwich (94), Spurs (102), Bournemouth (107) and West Ham (115) allowed opponents more shots than the Clarets’ 93. Our Fix Algorithm projects a point score of 4.7 for De Bruyne

With five goals and one assist over the last six gameweeks, Salah has averaged 7.6 points per game. No player, across all positions, has produced as many shots, in total (28), from inside the box (23) or on target (11) over that period. Antonio, Son (each six) and Dele Alli (eight) are the only midfielders able to better his three ‘big chances’, while only Richarlison (six) has created more big chances than his five. He is the second most owned player in the top 1000 as per our FPL Statistics feature. Liverpool have scored 14 goals over the last six gameweeks, more than any other side. They are also top for shots (105) and shots on target (SoT) (40). Their derby opponents Everton have conceded 13 goals over the last six gameweeks, only West Ham (16) conceded more. Only seven teams allowed opponents more SoT than their 27. Our Fix Algorithm projects a point score of 6.3 for the Egyptian. 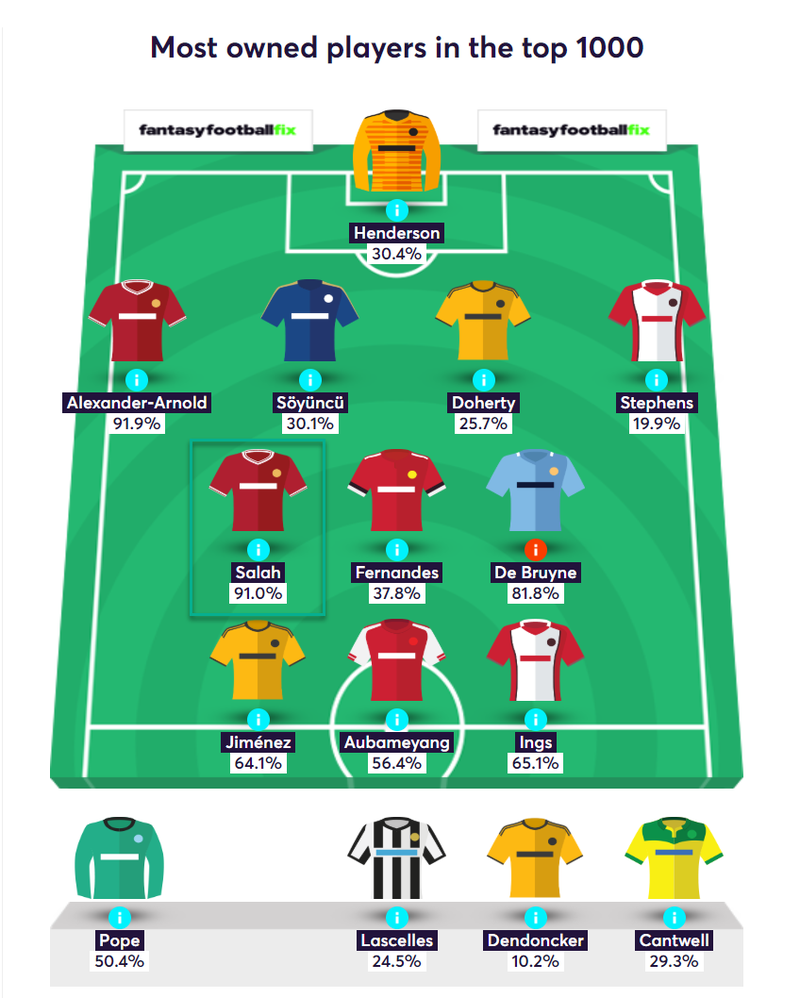 Since arriving in the Premier League, B. Fernandes has directly contributed to five goals in five gameweeks (two goals, three assists), amassing 7.6 points per game. No midfielder has picked up more Fantasy Premier League (FPL) points (38) over that period or taken more than his 19 goal attempts, while only Son and Salah (each eight) have fired more than his seven SoT. The 25-year-old has also excelled creatively, attempting 11 assists; only behind Moutinho (12), McNeil (13) and Maddison (16). He is the most transferred in player this week as per our Transfer Stats feature with almost 150,000 transfers. Man. Utd have scored eight goals over the last six gameweeks and are third for shots (96) with only Chelsea (100) and Liverpool (105) registering more. Their total of 34 SoT is bettered only by Chelsea (36) and Liverpool (40). Spurs have conceded nine goals over the same period, only six teams conceded more. Only Bournemouth (107) and West Ham (115) have allowed opponents more shots than their 102 and only West Ham (18), Southampton (20) and Villa have conceded more ‘big chances’ than their 17. Our Fix Algorithm projects a point score of 3.7 for B. Fernandes. 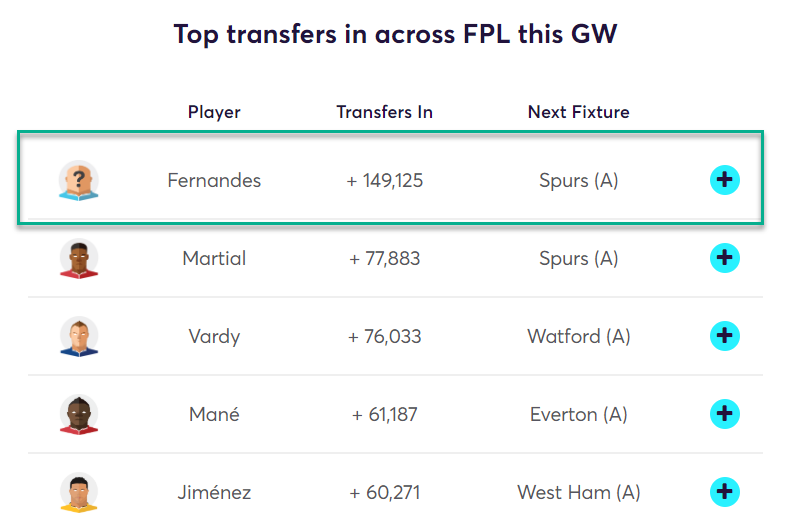 No player took more goal attempts than Jiménez (four) as Wolves were held to a 0-0 draw by Brighton in gameweek 29, with the only ‘big chance’ of the game falling to the Mexican. He has two goals in the last four Gameweeks and falls behind only J. Rodiguez and Calvert-Lewin (each six) amongst forwards, with a tally of five ‘big chances’. The 28-year-old ranks top amongst all players with totals of 19 shots and 15 SiB, over that period. Wolves are top of our Fixture Analyzer for the next six weeks making the Mexican a great long term pick. They have scored seven goals over the last six gameweeks and are ranked third for SiB (61) with only Chelsea (63) and Liverpool (68) faring better. They are also third for ‘big’ chances (18), trailing only Liverpool (19) and Everton (20). The Hammers defensive numbers are dreaful, no team has conceded more goals (16) or shots (115) over the last six gameweeks. Only Southampton (20) and Villa (23) have conceded more ‘big chances’ than the Hammers’ 18. Our Fix Algorithm projects a point score of 4.7 for Jiménez.

Mendy has earned starts in two of Man. City’s last three league matches, where he’s contributed to two clean sheets to return 4.3 points per game. The Frenchman has picked up two assists in seven appearances at the Etihad this season, while his average of 0.32 ‘big chances’ created per 90 minutes at home sees him rank sixth amongst defenders who’ve played a minimum of 450 minutes. Only Targett (1.87), Robertson (2.03), Digne (2.37) and Alexander-Arnold (3.22) can better his 1.74 attempted assists per 90 minutes, using the same criteria. Man. City have conceded just four goals over the last six gameweeks, only Man. Utd, Sheff. Utd (both three) and Burnley (two) have conceded fewer. No team restricted opponents to fewer SiB (22) or ‘big chances’ (five). Although Burnley have scored eight goals over their last six matches, they are ranked just 11th for shots (73) and 13th for SiB (46). Our Fix Algorithm projects a 50% chance of a Man. City clean sheet and a point score of 3.7 for Mendy.