Kane tops the Custom Stats table for gameweek 30 notching an xFPL score of 13.1. The Englishman topped the table for ‘big chances’ (three), shots in the box (SiB) (five) and shots on target (SoT) four. The gameweek’s top FPL scorer with 21 points, Pereira, landed four SoT and created three chances, registering an xFPL score of 9.7. Salah’s numbers were encouraging ahead of Liverpool’s good run, the Egyptian took five shots, three of which were in the box and landed two SoT, notching an xFPL score of 7.6. No player created more chances than Alexander-Arnold (four), the right-back looked back to his best with his xFPL score of 10.8 the highest amongst defenders this gameweek.

It was a good week for the budget mids with the likes of Lingard, Raphinha and Neto registering attacking returns and their numbers are compared over the last three gameweeks using the Fix Comparison Matrix. Averages are used since some of the players only played two games instead of three. Jota leads the comparison for goals (1.5), SoT (2.0) and ‘big chances’ (1.0), despite limited minutes. Raphinha has also posted impressive underlying numbers, the Brazilian leads the way for attempted assists (3.3) and is third for shots (2.3) but faces a difficult fixture run with Man. City, Liverpool and Man. Utd in the next three matches. Lingard boasts the highest projected points (26.5) by some distance with an average of 2.0 shots and 1.0 attempted assists per game. 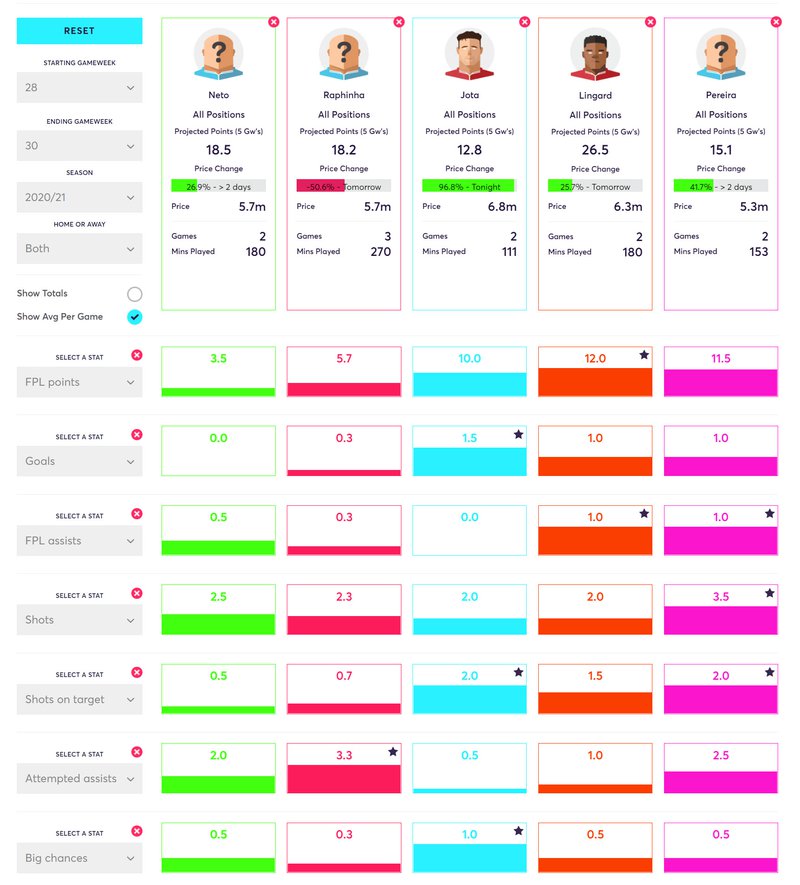 3. Trent back to his best

Alexander-Arnold has registered 21 FPL points over the last three gameweeks and his numbers are compared to other defensive options over that period using the Stats Sandbox feature. The right-back leads the way for xFPL (17.93) and attempted assists (seven) despite playing just two games. Alioski leads the way for shots (eight) but only comes in sixth for xFPL score (13.32). Coufal comes in fourth for attempted assists (four), the Czech Republic international might benefit from the Hammers’ switch to a back three formation which allows him more license to get forward. R. James posts encouraging numbers as well, the Chelsea right-back has attempted five assists in two matches but an expected assists (xA) score of just 0.20, which indicates these are not high quality chances.