Salah will be confident of adding to the three goals he scored in his last home game, as the Champions host Arsenal at Anfield in gameweek three. No midfielder has taken more shots than the Egyptian’s 13 and only Son and H.Barnes (both five) have landed more SoT than his four. He is also top for chances created (nine) amongst midfielders. Liverpool have scored six goals in their two matches, only Leicester and Leeds (both seven) have been more prolific. They are top for shots (40) and only Southampton (12) and Leicester (13) have landed more SoT than their 11. Arsenal have only conceded one goal so far, but have allowed 19 shots. Only eight teams have allowed opponents more ‘big chances’ than the Gunners’ three. Our Fix Algorithm currently projects a point score of 7.1 for Salah.

De Bruyne kicked off the season in style with a goal and assist against Wolves, landing four shots on target (SoT) and creating six chances. As the Comparison Matrix shows, the Belgian created a whopping 136 chances last season, with second placed Grealish managing just 91. He was second only to Salah (132) for shots (99) amongst midfielders. Man. City scored 57 goals over their 19 home matches last season at an average of three a game. They were also top for SoT (133) and ‘big chances’ (65). Leicester conceded 24 goals in away matches last season, keeping just five clean sheets. Only Wolves (138), Liverpool (115) and Man. City (108) allowed opponents fewer SiB than their 139. Our Fix Algorithm currently projects a point score of 6.8 for the Belgian. 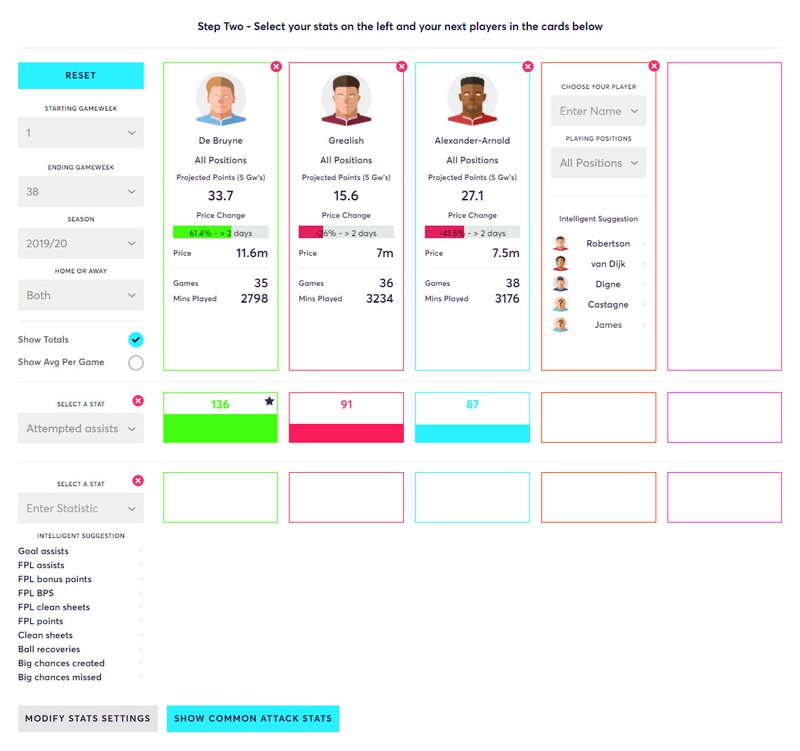 Kane posted a massive 21-point Fantasy Premier League (FPL) haul against Southampton in gameweek two and though he has only scored one goal and landed two SoT, his creativity numbers are impressive. As the Stats Sandbox shows, no forward has attempted more assists (six) or created more ‘big chances’ than Kane. Spurs have scored five goals over their two matches and only Everton, Liverpool (both six), Leeds and Leicester (both seven) have scored more. The North London club's total of 11 SoT is bettered only by Southampton (12) and Leicester (13). Newcastle have conceded three goals so far and only Wolves (10), Spurs (11), Leeds, Fulham (both 12) and West Brom (14) have allowed opponents more SoT than their nine. Our Fix Algorithm currently projects a point score of 5.7 for Kane.