Sterling will be looking to keep his scoring run going as the Champions travel to the south coast in gameweek three and no player has scored more than the Englishman’s four goals over the first two weeks. He ranks first among midfielders for shots (10), all of which were shots in the box (SiB) and also leads the way for shots on target (SoT) (six) and ‘big chances’ (five). Man. City have started strong and top the table for goals (seven), shots (44), SiB (32), SoT (19) and ‘big chances’ (nine). While Bournemouth have only conceded two goals in their two matches, the underlying statistics indicate they have been fortunate. They have allowed opponents 30 shots, the third-worst in the league and only West Ham (10) have allowed opponents more ‘big chances’ than their six. Our Fix Algorithm backs Sterling to get attacking returns with a point score of 7.1.

With the August hoodoo well and truly behind him, Kane will be looking to add to his total of two goals as the Magpies visit White Hart Lane. Only Pukki (four) and Barnes (three) have scored more goals amongst forwards than his two and his total of nine shots is only beaten by Pukki (10). He has also created two chances, which ranks fourth amongst forwards. Spurs have scored five goals in their two games, only Liverpool (six) and Man. City (seven) have scored more and it is just the Champions who have taken more shots (44) than their 34. Newcastle have conceded four goals in their two games so far and are ranked fifth-worst for SoT conceded (10). Only West Ham (10), Villa (six) and Bournemouth (six) have allowed opponents more ‘big chances’ than their five. Our Fix Algorithm backs Kane to find the back of the net with a projected point score of 6.1. 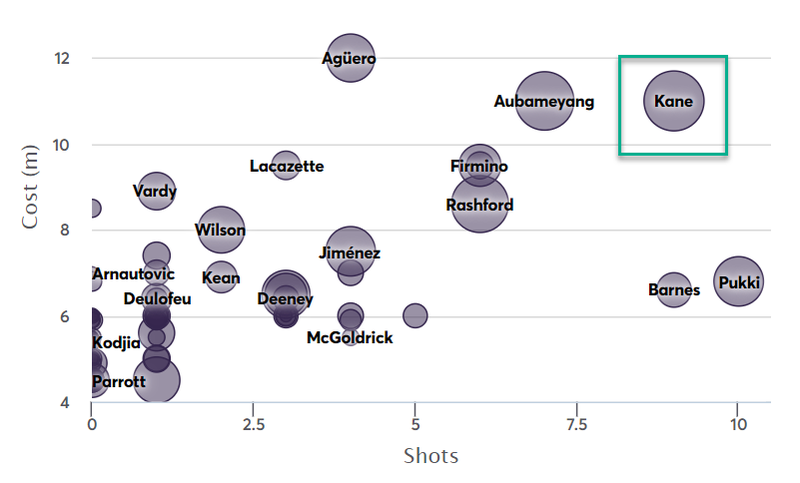 Martial’s goal against Wolves made it two in two for the Frenchman and only Sterling (four) has scored more amongst midfielders. As the Custom Stats table shows, his five shots is sixth-highest amongst midfielders and only three midfielders have landed more SoT than his three. Man. United have scored five goals so far, joint-third with Spurs. They have registered seven SoT, four ‘big chances’ and a chance every 9.5 minutes. Palace have only conceded one goal so far but like Bournemouth, the statistics indicate they have been lucky. They have allowed opponents 25 shots, the ninth-worst in the league and 17 SiB, the seventh-worst. Our Fix Algorithm projects a point score of 5.0 for the Frenchman.