Last season’s top Fantasy Premier League (FPL) points scorer began his campaign with a double-figure return (13) against Wolves, converting from the penalty spot, before later supplying an assist for Jesus. De Bruyne topped the charts for both goal threat and creativity in gameweek two and only Mitrović and Son could match his four shots on target (SoT), while no player attempted as many assists as his six. Only Salah matched the Belgian with 148 FPL points on home turf last season, which saw him average 8.7 points per game (PPG) at the Etihad. He is the fourth most bought player this week as per our Transfer Stats feature. Man. City started the season strong with three goals against Wolves from nine SoT. They were the most prolific scorers over the restart last season, scoring 34 goals. Leicester have conceded just two goals over their two matches this season with only Palace and Arsenal (one each) conceding fewer from teams who have played twice. Only Liverpool (one) allowed fewer ‘big chances’ than the Foxes’ two. Our Fix Algorithm currently projects a point score of 7.2 for KDB. 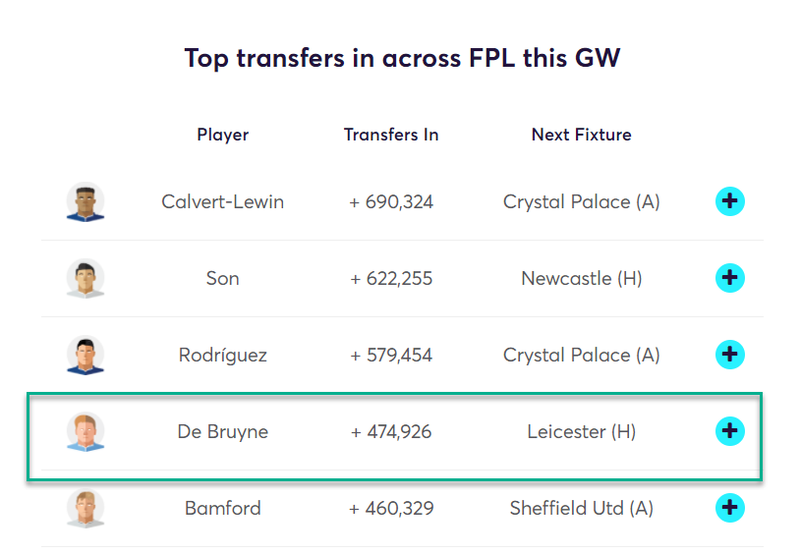 Werner won his second penalty of the season in gameweek two after he was brought down by Liverpool’s Alcántara, but Jorginho failed to convert from the spot. Though he is yet to get off the mark in the Premier League, the German international has fired six goal attempts, which is four more than any teammate. His total of 12 touches in the opposition’s box is eight more than any other Chelsea player has managed. As the Stats Sandbox shows, Antonio (six), Jiménez (seven), Calvert-Lewin (eight) and Richarlison (10) are the only FPL forwards able to better his five shots in the box (SiB) so far. Chelsea have scored just three goals over their first two matches but it is worth mentioning their attacking numbers towards the end of last season. Only Man. City (204) took more SiB than their 144 over the restart and their total of 29 ‘big chances’ was also beaten only by the Manchester side (38). West Brom have been woeful defensively, no team have conceded more goals (eight), conceded more SoT (14) or allowed more ‘big chances’ (eight). Our Fix Algorithm currently projects a point score of 6.1 for Werner.

With goals in each of the opening two gameweeks, Jiménez has averaged 7.0 PPG. No FPL forward has been afforded more than his three ‘big chances’ so far this season, while only Calvert-Lewin (eight) and Richarlison (10) have taken more than his seven SiB. Only Ings (four), Mitrović and Calvert-Lewin (each five) have landed more than his three SoT. The Midlands side have the best fixture run over the next five weeks as per our Fixture Analyzer. Wolves have scored three goals over the first two matches but it is worth mentioning they have taken 21 shots, with only six teams shooting more often. Their opponents West Ham have conceded four goals so far, and only Southampton (six), Fulham, Leeds (both seven) and West Brom (eight) have been weaker at the back. The Hammers have allowed opponents 15 SiB and three ‘big chances’ over those matches. Our Fix Algorithm currently projects a point score of 4.5 for the Mexican.

Manchester City got their campaign off to a flying start, with Foden amongst the scorers in a 3-1 win away at Wolves. The young Englishman’s goal came from a 'big chance', supplied by Sterling. Foden featured in nine of City’s 10 Premier League fixtures since the restart last season, starting six times (Sterling and De Bruyne each made seven starts by comparison). He amassed five goals and one assist over that run, to average 5.6 PPG. As the Stats Sandbox shows, amongst teammates, only Sterling (nine) scored more goals during that period, while only Jesus (12) and Sterling (15) fired more than Foden’s nine SoT. Man. City scored 57 goals over their 19 home matches last season at an average of three a game. They were also top for ‘big chances’ (65) and SoT (133). Leicester conceded 24 goals on their travels last season, keeping just five clean sheets. Only Wolves (138), Liverpool (115) and Man. City (108) allowed opponents fewer SiB than their 139. Our Fix Algorithm currently projects a point score of 3.7 for Foden.

Alexander-Arnold has attempted four assists over the opening two gameweeks, which only trails Digne (six) and Fredericks (seven) amongst defenders. The right-back amassed two goals and nine assists at Anfield last season, while keeping seven clean sheets, to average 6.0 PPG. No FPL defender contributed more than his 51 attempted assists on home turf last season, while only De Bruyne (20) created more than his 11 ‘big chances’, across all positions. Liverpool have conceded just three goals over their two matches and only Leicester, Everton (both two), Arsenal and Palace (both one) have conceded fewer amongst teams who played twice. No team has allowed opponents fewer ‘big chances’ than the Reds (one). Arsenal have scored five goals over their first two matches but are ranked just seventh for SiB (14) and ninth for SoT (eight). Our Fix Algorithm currently projects a 40% chance of a Liverpool clean sheet and a point score of 5.0 for the right-back.