Four goals in the first two matches have seen Sterling rank top for Fantasy Premier League (FPL) points, while his underlying numbers offer plenty of encouragement too. Only Pukki has matched the England midfielder’s total of 10 shots inside the box (SiB), while his total of six shots on target (SoT) ranks joint-second in the league matched by A. Barnes, and only bettered by Pukki (seven). As the Custom Stats table shows, five 'big chances' by the 24-year-old is at least two more than any other player has managed so far this season. Man. City have started the season on fire, topping the table for goals (seven), shots (44), shots in the box (SiB) (32), shots on target (SoT) and ‘big chances’ (19). Although the Cherries have conceded only two goals so far, the underlying statistics indicate they have been a bit lucky. They have allowed their opponents a total of 30 shots, the third worst in the league, and only West Ham have conceded more ‘big chances’ than their 10. Our Fix Algorithm projects a point score of 6.6 for the Englishman.

Kane was kept at bay by a resilient Man. City defence in gameweek two. Despite shipping two goals, Man. City only allowed Spurs three attempts and didn’t concede a single 'big chance'. Fast-forward to gameweek three and a home fixture against Newcastle should offer plenty more opportunities for the forward. Kane averaged 7.5 points per game (PPG) last season during matches against the bottom eight teams from. Nine goal attempts by the Englishman over the first two gameweeks can only be bettered Pukki and Sterling (each 10) across all positions, while his total of six SiB ranks joint-fourth in the league. Only Liverpool (six) and Man. City (seven) have scored more goals than Spurs’ five and the Champions are the only side to have taken more shots (44) than their 34. Newcastle have conceded four goals so far and are ranked fifth-worst for SoT conceded (10). Only West Ham (10), Bournemouth (six) and Villa (six) have allowed opponents more ‘big chances’ than their five. Our Fix Algorithm projects a point score of 6.0 for Kane. 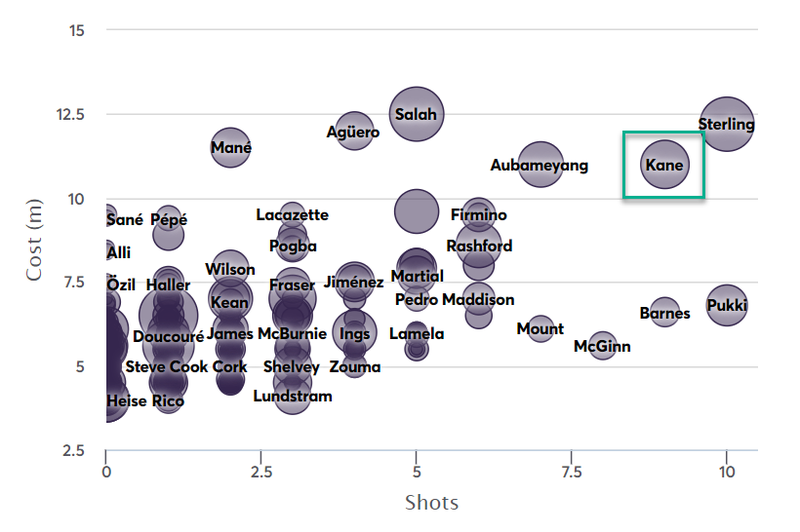 Martial continues to lineup in the stereotypical no.9 role this season and although Wolves restricted him to just one effort at goal, the Frenchman was clinical in finding the back of the net for a second successive gameweek. The 23-year-old has had 15 touches in the opposition’s penalty box this season; more than double the amount of any other Man. United player and the second highest across all players in the league just behind Sterling (20). His total of three SoT ranks top amongst teammates, ahead of Rashford (two), while only Pogba has matched Martial’s total of three SiB. Man. United have scored five goals so far, and only Liverpool (six) and Man. City (seven) have scored more. The Red Devils have landed seven SoT, four of which were ‘big chances’ and created a chance every 9.5 minutes. Palace are yet to pick up a win in the league and although they have conceded only one goal, they have allowed their opponents 25 shots, the ninth-worst in the league. Just six teams have allowed opponents more SiB than their 17. Our Fix Algorithm backs the Frenchman to keep his scoring run going with a point score of 4.9. 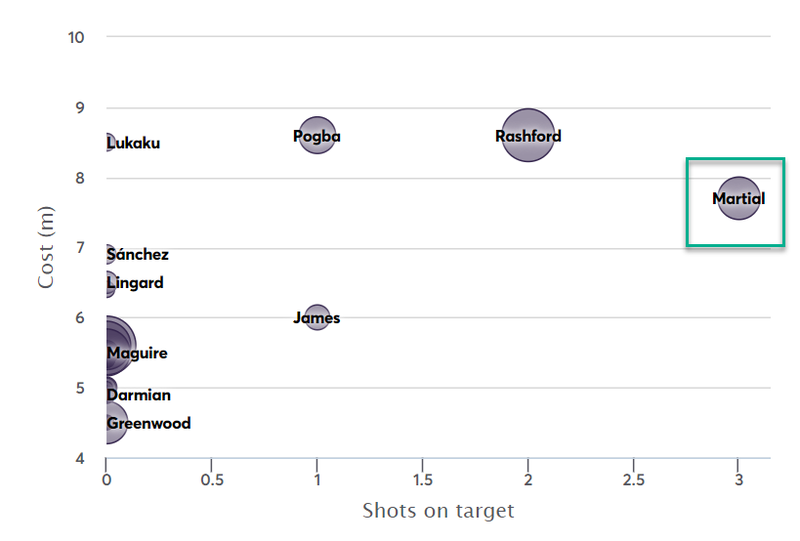 Last season’s Championship Golden Boot winner Pukki claimed all three Norwich goals in a win over Newcastle last weekend. As the Custom Stats table shows, his total of seven SiB, with six SoT was more than any other player during the gameweek, while only Sterling has matched the Finn for goal attempts (10) so far this season. Having opened his account against Liverpool in gameweek one, he looks completely comfortable with the transition from the Championship to the Premier League. Only McGoldrick, Agüero (each three) and Sterling (five) have had more than Pukki’s two 'big chances' during the first two gameweeks. Norwich have scored four goals in their two matches, the fifth-highest in the league. Their total of 20 SiB is the third-highest with only Burnley (21) and Man. City (32) faring better. Chelsea have had an abysmal start to the season, conceding five goals and only West Ham have conceded more (six). They have allowed opponents five ‘big chances’ and only Villa (six), Bournemouth (six) and West Ham (10) have been more obliging. Our Fix Algorithm projects a point score of 4.4 for the Finn.

It took a long range strike from Ruben Neves to breach the Man. United defence on Monday night, with Wolves failing to record a single 'big chance' and firing just two SoT during the 90 mins, the joint-fewest of the gameweek. The young right-back has made more tackles (15) than any other defender during the opening two gameweeks, while only R. Pereira (30 to 20) has won more duels. He picked up 18 bonus points while playing fo Palace last season, and played his hand in 12 clean sheets. He also ranked first amongst FPL defenders for interceptions (84) and tackles won (91). Man. United have only conceded one goal this season, the second-lowest in the league, and only Everton have managed to keep a clean sheet in both matches. The Red Devils have also allowed just one ‘big chance’ across 180 minutes, the lowest in the league, and have restricted opponents to just 14 SiB, which is impressive considering they have played Chelsea and Wolves. Palace are one of two teams yet to score this season and their total of 12 shots is the lowest in the league. They have fashioned just one ‘big chance’ thus far, which is also a league low. The Eagles rock bottom for SiB with eight, and our Fix Algorithm projects a 40% probability of a Man. United clean sheet and a point score of 3.5 for Wan-Bissaka.