Having notched three goals and two assists in the last five gameweeks, Kane has averaged 5.5 points per game (PPG). No player has taken as many shots in total (24) or landed as many on target (nine) in that time, while only Jesus, Vardy (each 13) and Diagne (14) can better his 12 shots in the box (SiB). Only Watkins (1.63) and Vardy (1.86) can better his 1.32 expected assists (xA) figure, amongst forwards. Kane is the most owned player in the top 1000 that plays in gameweek 29 as per our FPL Statistics feature. Spurs have scored 13 goals over the last six gameweeks, only Leicester (14) and Man. City (25) have scored more. Their total of 15 ‘big chances’ is only bettered by Chelsea (16), Leicester (19) and Man. City (28). Villa have conceded four goals over the last six gameweeks, keeping four clean sheets. However, the underlying statistics indicate they have been a bit lucky, only Burnley (102), Sheff. Utd (103), Palace (109) and Everton (110) have allowed opponents more shots than their 100. Our Fix Algorithm currently projects a point score of 5.3 for Kane. 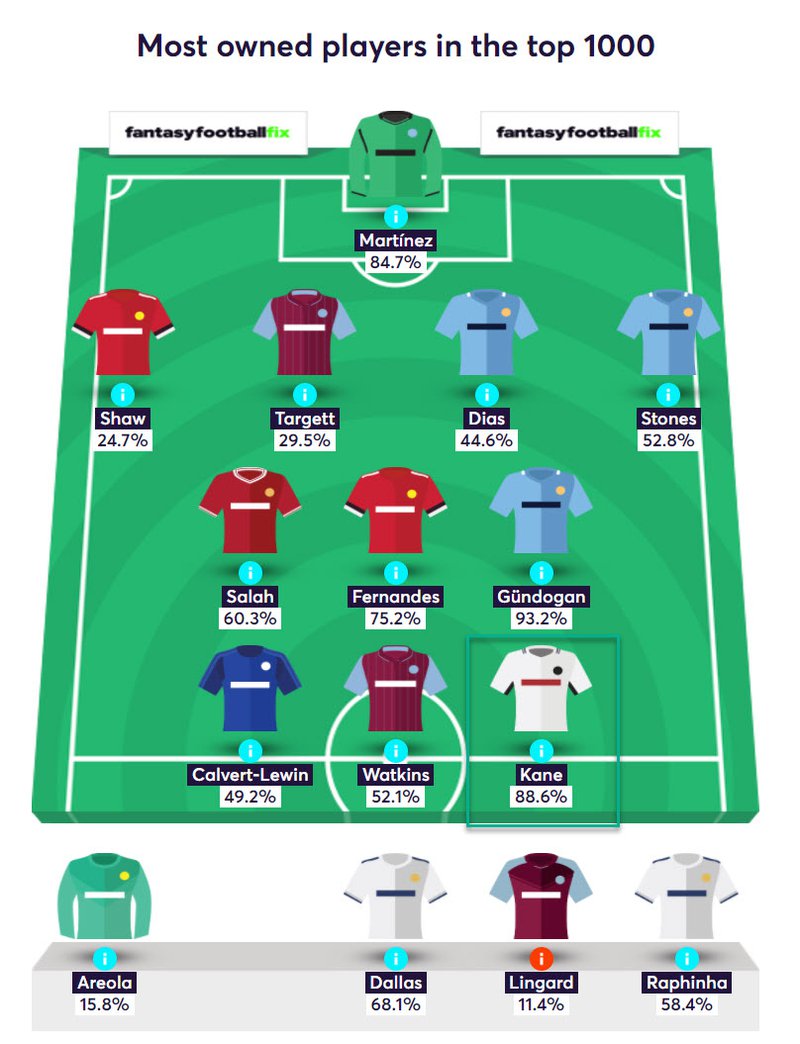 Aubameyang was left out of Arsenal’s starting XI to face Spurs for disciplinary reasons, despite having scored four goals in the previous four gameweeks. During that period (gameweek 24 -27), only Mahrez (12) fired more than his nine SiB amongst midfielders, while only Sterling (five) recorded more than his four ‘big chances’. Only Maja (3.36) could better his 2.82 expected goals (xG) figure, across all positions. The Gunners are ranked second in the Fix Fixture Analyser for the next six weeks so Aubameyang could be a great long term buy. Arsenal have scored 10 goals over the last six gameweeks, only Spurs (13), Leicester (14) and Man. City (25) have been more prolific. The Gunners are ranked 14th for shots (74) and 11th for ‘big chances’ (11) over this period. Their opponents, West Ham, have conceded four goals over the last six gameweeks, keeping three clean sheets. However, the Hammers are ranked 14th for shots conceded (90), which indicates that Arsenal could have plenty of opportunities. Our Fix Algorithm currently projects a point score of 3.2 for Aubameyang.

Antonio has netted twice in the last four gameweeks, to average 4.3 PPG as per our Fix Heatmaps feature. Jesus (2.43), Kane (2.78) and Iheanacho (3.12) are the only forwards able to better his 2.41 expected goals (xG) figure during that period. His total of four shots on target (SoT) and three ‘big chances’ rank joint-first amongst teammates, on par with Lingard. West Ham have scored eight goals over the last six gameweeks and are ranked ninth for ‘big chances (13) and 16th for SiB (40). Arsenal have conceded seven goals over the same period, keeping no clean sheets. The Gunners are ranked ninth for SoT conceded (27) and fifth for ‘big chances’ conceded (nine). Our Fix Algorithm currently projects a point score of 4.3 for Antonio. 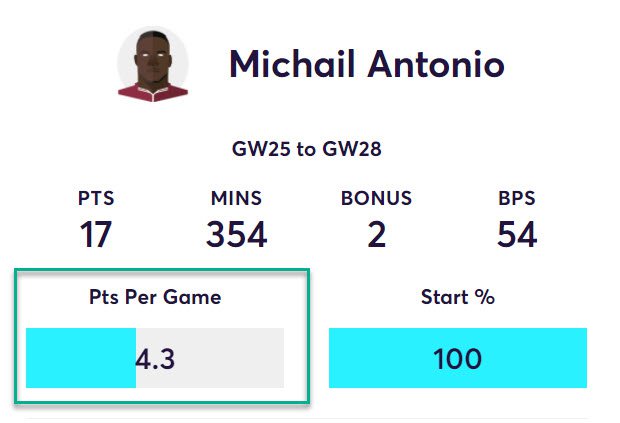 With three goal involvements in the last six gameweeks (one goal, two assists), Raphinha has averaged 4.3 PPG. No midfielder has taken as many as his 20 shots in total, or his 13 SiB, while only Gündogan has landed more SoT (nine to eight). The Leeds winger also ranks top for attempted assists (21) and is joint-first with Son for ‘big chances’ created (six). He is the fourth most transferred in player this week as per our Transfer Stats feature.  Leeds have scored seven goals over the last six gameweeks and only Man. City (94) have registered more SiB than their 65. Their total of 35 SoT is only bettered by Leicester (36), Chelsea (37) and Man. City (57). Leeds’ opposition, Fulham, have conceded five goals over the last six gameweeks, keeping five clean sheets. The Cottagers are ranked eighth for SiB conceded (46) and 10th for ‘big chances’ conceded (12). Our Fix Algorithm currently projects a point score of 3.7 for Raphinha. 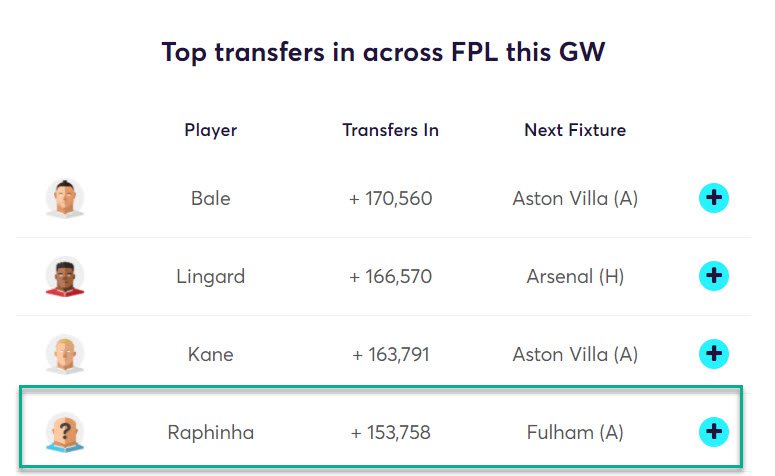 Veltman opened his account for Brighton with a goal against Crystal Palace in gameweek 25 and no defender has taken more shots (10) in the last six gameweeks. The right-back has racked up an expected goals (xG) figure of 1.03 in that time, which can only bettered by Coady (1.17), while only Cooper (five) has landed more than his four SoT. In terms of creation, only five defenders have created more ‘big chances’ than his two. Brighton have conceded just seven goals over the last six gameweeks, keeping one clean sheet. Only Chelsea (28) have allowed opponents fewer SiB than Brighton’s 29, while the Blues (two) are also the only team to restrict opponents to fewer ‘big chances’ than the Seagulls (six). Brighton take on Newcastle in gameweek 29, a team who have only scored six goals during their last six gameweeks. Only West Ham, West Brom (each 40), Everton (38), Sheff. Utd (30) and Palace (28) have registered fewer SiB than the Magpies’ 41. While Palace (four) are the only team to have fashioned fewer ‘big chances’ than their six. Our Fix Algorithm currently projects a 40% chance of a Brighton clean sheet and a point score of 4.3 for Veltman.