Antonio tops the Custom Stats xFPL table for gameweek 29 with a score of 8.4. The forward was unfortunate not to notch more FPL returns as he registered five shots in the box (SiB) and also attempted five assists, topping the gameweek for both. Lookman was also unlucky not to rack up a bigger score. The winger took four SiB and also attempted five assists, registering an xFPL score of 5.8. On the other side of the spectrum, the gameweek’s highest point scorer Trossard (14 points) who took just one SiB and attempted three assists, notching an xFPL score of 6.8.

Lacazette registered his second goal in as many gameweeks and using the Fix Heatmaps feature, his numbers are compared to his teammate Aubameyang for the last three gameweeks. The Frenchman is dominant in every metric, taking nine shots to the Gabonese’s four and registering more than double the expected goals (xG) (1.88 to 0.72). He is also more creative, with two attempted assists to Aubameyang’s zero. Lacazette averages 1.75 shots on target (SoT) to Aubameyang’s 0.53, again another huge difference. The Frenchman has gone under-the-radar and deserves consideration ahead of Arsenal’s kind run of fixtures from gameweek 30.

3. The case for Lingard

Lingard registered a goal and assist against Arsenal taking his total to five goals and three assists since he joined the Hammers in gameweek 22. Using the Fix Comparison Matrix, his numbers are compared to other popular budget midfielders over the last four gameweeks. He tops the comparison in almost every department, FPL points (7.3), goals (0.7), assists (0.7), shots (3.0) and SoT (1.3). Raphinha appears to be the next best option, the Brazilian tops the table for attempted assists (2.8) and is second only to Lingard for shots (2.5). West Ham are still in contention for the European spots and with how he is performing currently, Lingard is looking like he is creeping into the 'must-own' category. 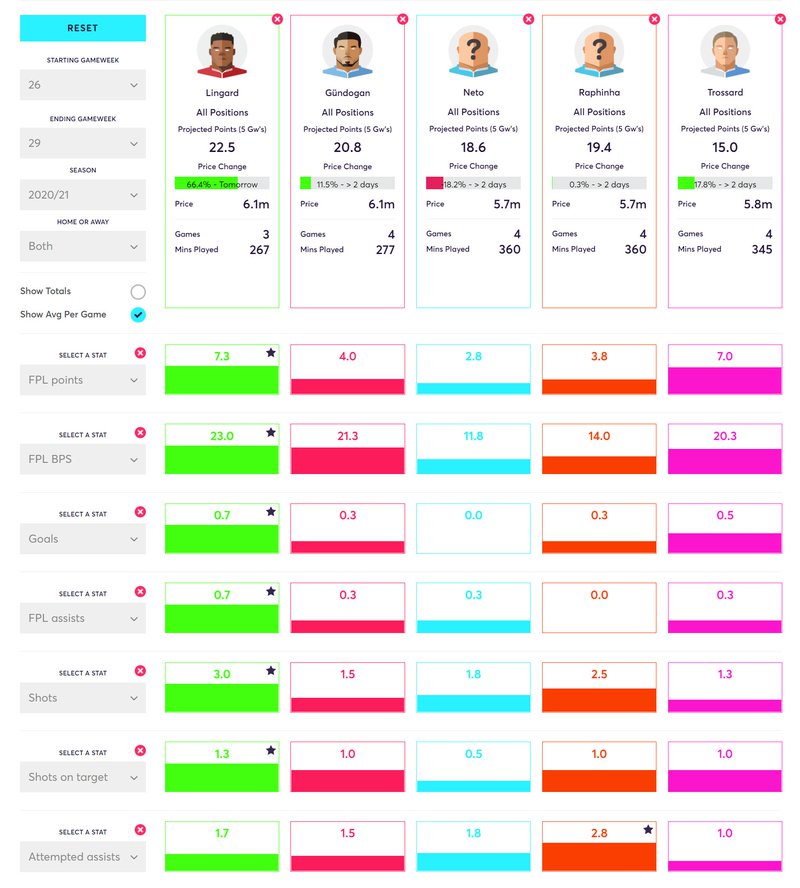