Ritchie tops the Custom Stats xFPL table for gameweek 29 with an xFPL score of 10.4, his missed penalty was a ‘big chance’ and he also attempted two assists.  Wood put forth his credentials as a budget forward, the Kiwi took more shots (six) than any player this week and only Antonio (three) was afforded more ‘big chances’ than his two. He was also joint-top for shots on target (SoT) with Martial and H. Barnes (all three) and notched an xFPL score of 10.3. Barkley was the week’s most creative player with six attempted assists. The Blues’ midfielder also landed two SoT and created a ‘big chance’, leading to an xFPL score of 7.5. Lundstram posted impressive numbers on his return to the Sheff. Utd side. The Blades defender took three SiB and created two chances, leading to an xFPL score of 8.3.

Chelsea were resounding winners in gameweek 29 with a 4-0 win over Everton and though they do not have a fixture in gameweek 31, the Blues have good fixtures either side with Villa and West Ham their next opponents. A look at the Stats Sandbox for the last four gameweeks shows that despite just three appearances, Alonso leads the way for FPL points (30) and xFPL (22.61). He has taken more shots (11) than any Chelsea player and is also third for attempted assists (six). In terms of xFPL score, his fellow Spaniard Azpilicueta comes in second (18.42) despite registering just 10 FPL points. He has taken six shots, landed two on target and attempted three assists but registered no FPL attacking returns. Giroud comes in third for xFPL (15.65) and FPL points (21). The Frenchman has started all of the last four, scoring two goals from nine shots and four SoT. In terms of midfielders, Barkley registers the highest xFPL score (14.29). The 26-year-old trails only Alonso for shots (10) and leads the way for chances created (eight). With all their ownership at much lower levels from earlier on in the season, Chelsea players look like great differentials for the run in.

With only eight teams having a fixture in gameweek 31, the standout attacking FPL assets from those fixtures are put under the scanner using the Fix Comparison Matrix for the last two weeks. Sarr leads the way for FPL points (21) and goals (two), the Senegalese attempted five SiB, landed three SoT and attempted two assists. Alli’s numbers stand out given that Spurs have just played two strong defensive sides – Wolves and Burnley. The 23-year-old is top for SiB (six), SoT (three) and was afforded three ‘big chances’ as well. Antonio’s numbers are impressive as well, he leads the comparison for ‘big chances’ (five) and attempted assists (five). The Wolves pair of Jiménez and Jota have landed just three SoT combined over the last two matches and are also behind the others for ‘big chances’ (two each). They have been shooting frequently though, with their SiB numbers (six for Jiménez and five for Jota) similar to the other players. 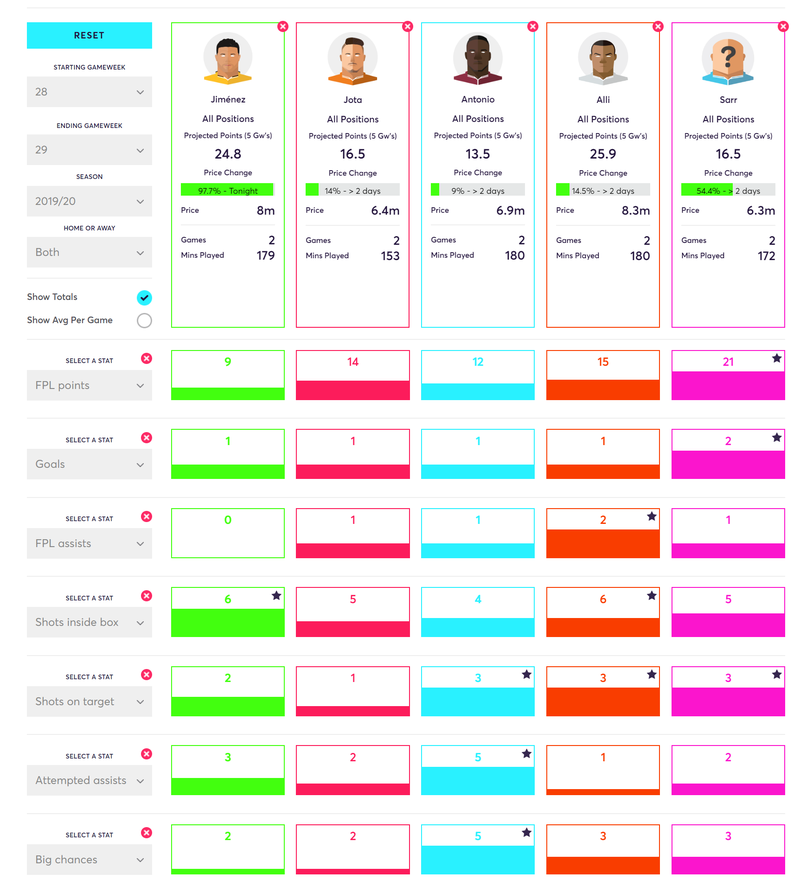