B. Fernandes took his total to 16 goals for the season with his penalty against Man. City in gameweek 27. As the Stats Sandbox shows, no midfielder has taken more shots (86) or landed more shots on target (SoT) (37) while he also leads the creativity statistics with 77 chances created and 17 ‘big chances’ created. Man. Utd (55) trail only Man. City (61) for goals scored while their total of 70 ‘big chances’ is bettered only by Liverpool (73) and Man. City (85). West Ham have conceded 31 goals this season and are ranked seventh for shots conceded (307) and ‘big chances’ conceded (44). Our Fix Algorithm currently projects a point score of 6.5 for B. Fernandes.

Kane will have his eyes firmly on the Golden Boot as he trails only Salah (17) for goals scored (16) this season and no forward has taken more shots (95) than the Englishman this season. Only Bamford (37) has landed more SoT than Kane (36) and the Spurs man leads the way for chances created (39) and ‘big chances’ created (14). He is the most transferred in player this week with nearly 350,000 managers bringing him in as per our Transfer Stats feature. Spurs (46) trail only Liverpool (47), Leicester (48), Man. Utd (55) and Man. City (61) for goals scored this season while only Man. Utd (70), Liverpool (73) and Man. City (85) have fashioned more ‘big chances’ than their 64. Arsenal have conceded 28 goals this season and are ranked fourth for SoT conceded (97) and ‘big chances’ conceded (41). Our Fix Algorithm currently projects a point score of 5.0 for Kane. 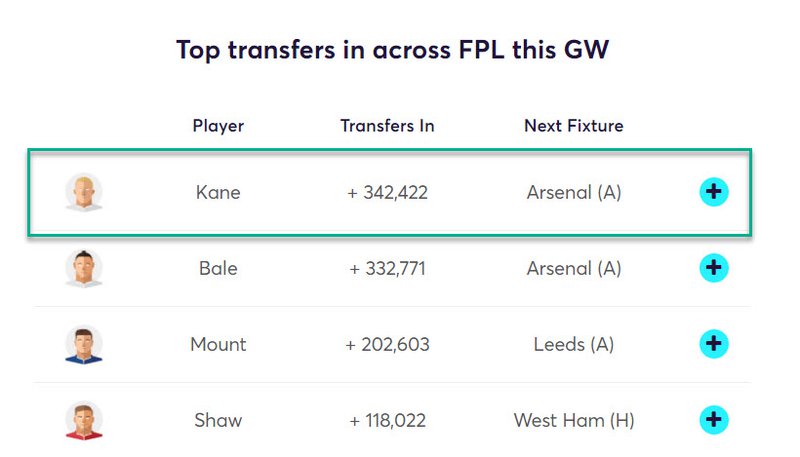 De Bruyne has been in fine form since his return from injury scoring two goals in the last two gameweeks. No midfielder has taken more shots (13) or landed more SoT (six) over this period. He also leads the way for chances created (12). His ownership is currently below 20% across all user groups as per our FPL Statistics feature. Man. City lead all the attacking metrics this season – goals scored (61), shots (458), SoT (168) and ‘big chances’ (85). Fulham are ranked ninth for goals conceded (33), 12th for SoT conceded (121) and 15th for ‘big chances’ conceded (60). Our Fix Algorithm currently projects a point score of 5.5 for the Belgian. 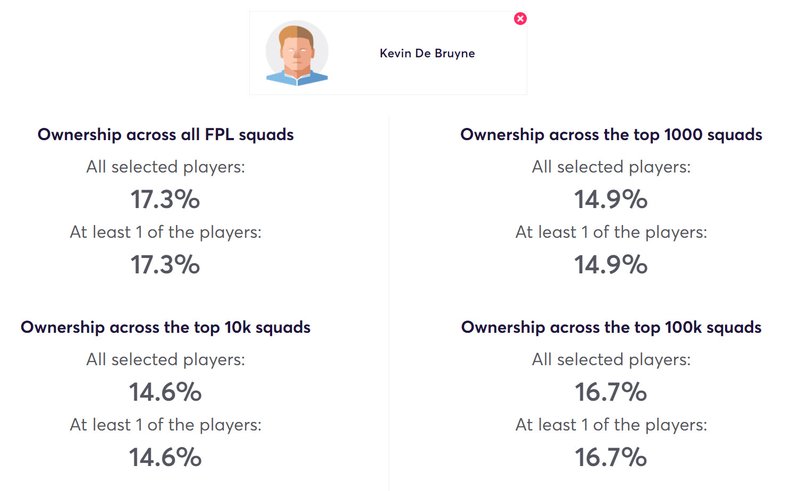