Salah had a little bit of good fortune with some poor goalkeeping to score his goal against West Ham but no midfielder fired more than his three shots on target (SoT) in gameweek 27. The Egyptian has four goals and one assist in the last four gameweeks and no player has been directly involved in more goals (five) over that period. As the Stats Sandbox shows, he ranks first with a total of 20 shots in the box (SiB) and joint-first with nine SoT, while only Richarlison and McNeil can match his four ‘big chances’ created. No team has scored more goals (15), taken more SiB (81) or landed more SoT (44) than Liverpool over the last six gameweeks. The Reds also only trail Everton (22) and Man. City (23) for ‘big chances’ (21). Watford have conceded nine goals over the same period, only six teams have conceded more. They are also ranked seventh-worst for shots conceded (85). Our Fix Algorithm projects a point score of 6.6 for Salah.

Vardy struck the post against Man. City to continue his goal drought and is now without a goal in the last six gameweeks, where he has amassed just one assist. Although the Leicester talisman has taken just eight shots in that time, ranking 20th amongst forwards, only Abraham and Firmino (each six) have missed more ‘big chances’ than his five. The 33-year-old has also created three ‘big chances’ in that time, ranking first amongst players in his position. No team has better fixtures than Leicester over the next three gameweeks according to our Fixture Analyzer. The Foxes have scored 28 goals on their travels this season, only Man. City (35) have been more prolific on the road. Their total of 77 SoT and 45 ‘big chances’ in away matches is only bettered by the reigning Champions with 98 and 55 respectively. Norwich have conceded 26 goals at home, only Southampton (30) have shipped more on home turf. No team has allowed opponents more SoT than the Canaries’ 77 in home matches and only Villa (40) and West Ham (42) have conceded more ‘big chances’ (35). Our Fix Algorithm projects a point score of 6.0 for Vardy.

Richarlison has now scored seven of his 10 goals this season during games against Arsenal, Man City, Chelsea, Liverpool, Leicester and Wolves. Over the last eight gameweeks, the 22-year-old has been directly involved in six goals across six appearances (four goals, two assists). Son (12) and Salah (15) were the only midfielders able to better his 10 SoT over that run, while his tally of six ‘big chances’ created was on par with De Bruyne and only behind Salah (seven). Nearly 100,000 managers have already brought in the Brazilian this week as per our Transfer Stats feature. Everton have scored 12 goals in the last six gameweeks and only the league leaders Liverpool have scored more (15). Their total of 58 SiB is only bettered by Chelsea (61), Man. City (79) and Liverpool (81), while Man. City (23) are the only team to have created more ‘big chances’ (22). Their opponents Man. Utd have found some defensive solidity of late, conceding just four goals in the last six gameweeks and only Liverpool (three) have conceded fewer. Chelsea (15) and Man. City (11) are the only teams to have allowed opponents fewer SoT than the Red Devils (17). Our Fix Algorithm projects a point score of 4.2 for Richarlison. 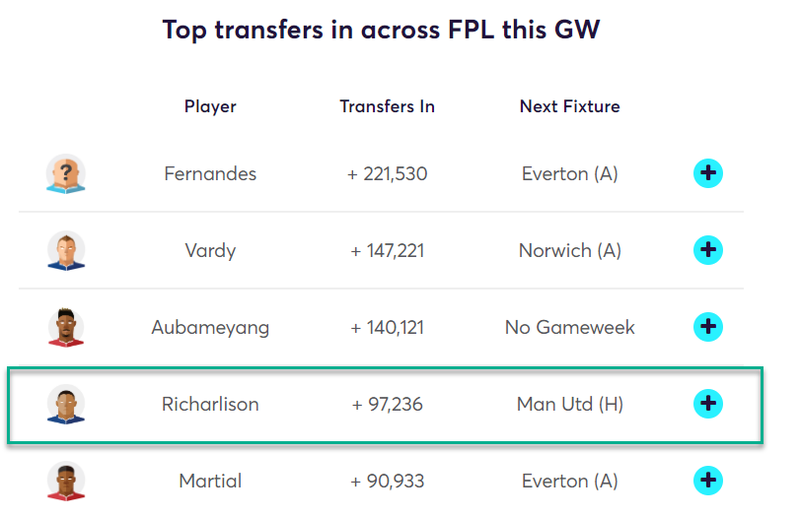 Ings came away with 4.45 xFPL (expected FPL) points against Aston Villa, after he missed a ‘big chance’ and created a big chance for Djenepo, which the midfielder failed to convert. The 27-year-old has two goals in the last six gameweeks and only Jiménez (20), Firmino, Calvert-Lewin (each 22) and Agüero (23) have taken more than his 18 shots, amongst forwards. A total of 15 SiB and eight SoT see him rank joint-fifth and joint-sixth respectively. He is the fourth most owned player with 81% ownership in the Top 1000 according to our FPL Statistics feature. Southampton have scored nine goals over the last six gameweeks and only Arsenal (11), Man. City, Everton (both 12) and Liverpool (15) have scored more. Liverpool (113) and Man. City (122) are the only teams to have taken more shots than Southampton’s 97. Their total of 35 SoT is again only bettered by the two teams at the top of the table Man. City (41) and Liverpool (44). West Ham have conceded 16 goals over the last six gameweeks, the most in the league. No team has allowed opponents more shots than their 120 and only Villa (28) have allowed opponents more ‘big chances’ than their 22. Our Fix Algorithm projects a point score of 4.8 for Ings. 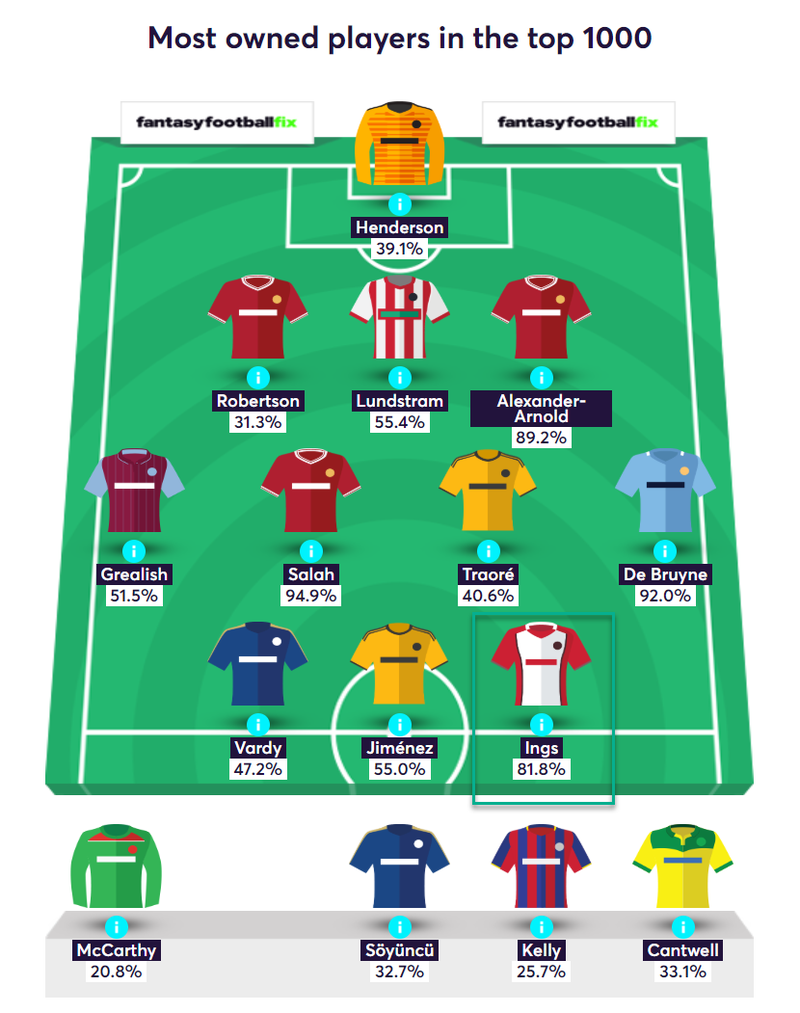 After playing a hand in two of his side’s goals against West Ham, Alexander-Arnold now has four assists in the last five gameweeks, averaging 7.5 points per game. No defender has produced as many as his 13 attempted assists in that time, while only Grealish (16), Maddison (18) and De Bruyne (20) have fared better, amongst all players. R. Pereira is the only defender able to match the Liverpool right-back for goal attempts (nine). Liverpool have conceded just three goals in the last six gameweeks, the lowest in the league. Only Man. Utd (45), Southampton (36), Wolves (35), Chelsea (27) and Man. City (25) have allowed opponents fewer SiB than the Reds’ 46. Watford have scored seven goals over the same period and only Sheff. Utd, Bournemouth (both six), Palace (five), Newcastle (four) and Norwich (two) have scored fewer. Villa (eight), Norwich, Palace (both six) and Newcastle (five) are the only teams to have created fewer ‘big chances’ than the Hornets’ 11. Our Fix Algorithm projects a 60% chance of a Liverpool clean sheet and a point score of 5.6 for Alexander-Arnold.