Iheanacho tops the Custom Stats xFPL table for gameweek 28 with a score of 14.5. No player took more shots (six) than the Nigerian and he also led the way for ‘big chances’ (four). B. Fernandes was the week’s most creative player with five attempted assists, the Portugugal international registered an xFPL score of only 5.7, since only one of his four shots was in the box. The most sold player of the week Salah was afforded no ‘big chances’ and took only two shots in the box (SiB), notching an xFPL score of 3.8. Havertz posted promising numbers despite not registering any returns, no player landed more shots on target (SoT) (four) than the German, but none of these were ‘big chances’ which explains his low xFPL score of 4.1.

Brighton notched their sixth win of the season in gameweek 28 and are one of eight teams which feature in gameweek 29. Using the Stats Sandbox, their assets are compared over the last four gameweeks. Veltman tops the table for shots (eight) and xFPL (24.20) and is a secure starter with the injury to Lamptey. Trossard leads the way for SoT (five) but comes in fourth for expected goals (xG) (0.73) which indicates he is not getting clear cut opportunities. Groß is by far their most creative player with 10 attempted assists, four clear of second placed Maupay (six). The Frenchman is ranked just eighth for xFPL (12.47) so the best options in attack appear to be in the Seagulls’ midfield.

With just eight teams competing in gameweek 29, the popular budget forwards from those sides are compared over the last four gameweeks using the Fix Comparison Matrix. Averages are used since Bamford and Watkins have played an extra game. Antonio leads the way for FPL Points (4.3), goals (0.5), SoT (1.0) and ‘big chances’ (0.8). Despite leading the way for shots (2.4), Watkins has failed to register a single ‘big chance’ over the last four gameweeks. Maupay also has fared similar, with zero ‘big chances’ over the aforementioned period but the Frenchman is top for SoT (1.0) and attempted assists (1.5). 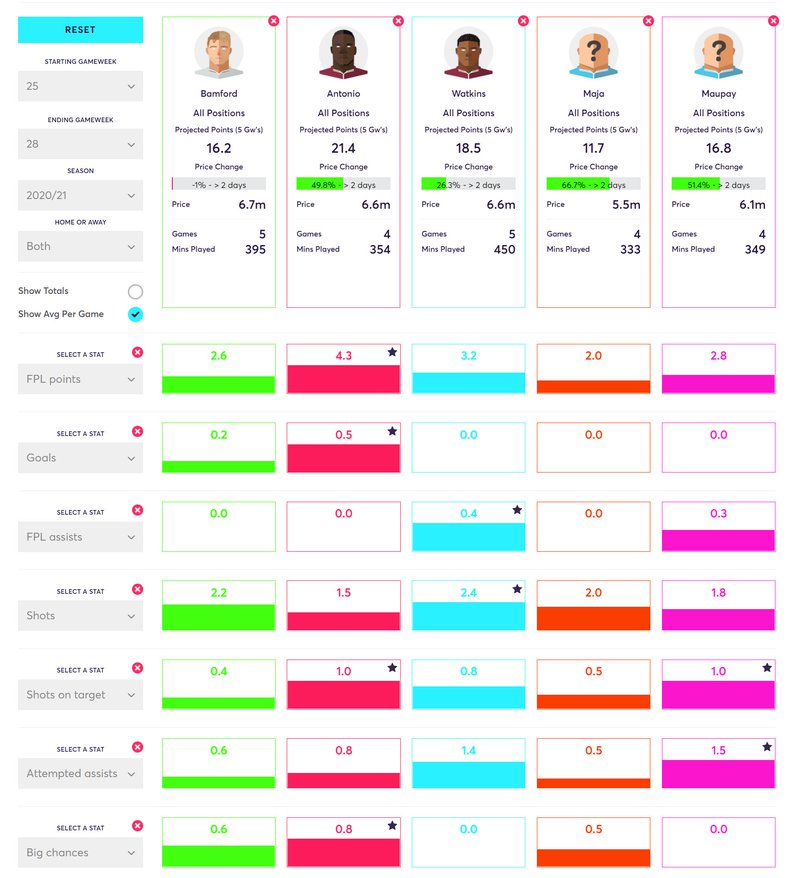