Watford’s Senegalese talisman Sarr tops the Custom Stats xFPL table this week with a score of 12.6. He took four shots in the box (SiB), three of which were ‘big chances’ and landed three shots on target (SoT). No player landed more SoT than Maupay’s four, the Frenchman notched an xFPL score of only 4.4 as only one of these was a ‘big chance’. Alonso led the way for SiB (five), the Spaniard attempted more shots (seven) than any player this week and also attempted four assists which saw him register an xFPL score of 11.8, the second highest this week. Montoya was the most creative player with five attempted assists, however the Brighton fullback managed an xFPL score of only 3.4 as none of these were ‘big chances’ created.

Jota outscored the more popular Jiménez for the second consecutive gameweek and the two are compared using the Fix Heatmaps feature for the last four weeks. The Portuguese (32) has scored double the Fantasy Premier League (FPL) points of the Mexican (16) and the underlying statistics show this was no fluke. Although Jiménez has taken more shots than Jota (16 to 12), the latter’s superior expected goals (xG) score (2.82 to 2.67) shows that he is getting better quality chances and testing the keeper with more regularity with six SoT to the Mexican’s three. Unusually for Jiménez, he has created just one chance in the last four gameweeks compared to Jota’s five so he is losing out in the creativity numbers as well. At under 6% ownership, Jota looks a great buy.

It was a good week for attacking fullbacks with Doherty and Alonso registering big FPL scores. The pair have now registered attacking returns in consecutive gameweeks and their numbers are compared to the other popular defenders in that price bracket using the Fix Comparison Matrix for the last two weeks. The underlying numbers show that their attacking returns were well deserved. Both the Irishman and the Spaniard took a whopping five SiB over the last two matches and also landed three SoT each. Alonso beats Doherty for creativity though, with six attempted assists to the latter’s three but it is worth mentioning Robertson still beats them both with seven. Pereira’s numbers are unimpressive with just one SiB and three attempted assists. Alonso should have his spot nailed down in the short term with his recent performances but Doherty’s spot is arguably more secure, making him an outstanding pick for Wolves’ upcoming run of kind fixtures which sees them top of our Fixture Analyzer. 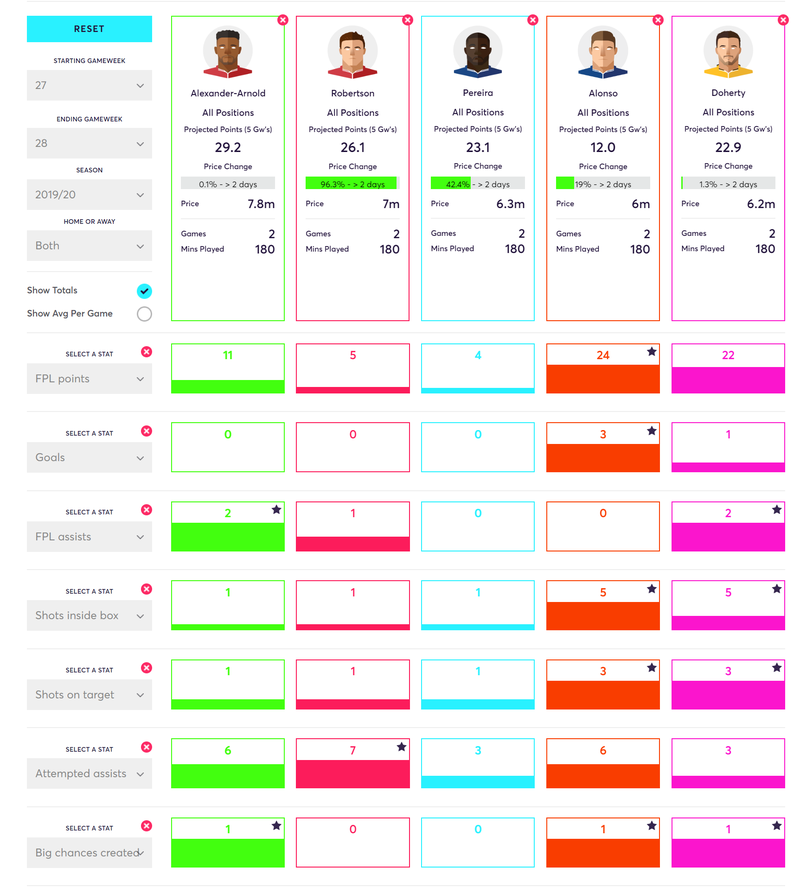