Caveat - This blog was written prior to the games on the 3rd and 4th March.

Following his return from injury, De Bruyne has made three consecutive Premier League starts over the last two gameweeks. The Belgian has fired nine shots in that time to rank just behind Neto (11) amongst midfielders. No player has completed as many passes in the final third (76), while only Lookman (seven), Shaw (eight), Son (eleven) and Raphinha (14) can better his six attempted assists. The Belgian is the third most transferred in player this week as per our Transfer Stats feature, nearly 70,000 managers have already brought in the Man. City maestro. The Cityzens top all the attacking metrics over the last six gameweeks – goals scored (20), shots (109), shots on target (SoT) (45) and ‘big chances’ (23). Their first opponents, Man. Utd, have conceded five goals over the last six gameweeks and only Man. City, Brighton (each four) and Chelsea (two) have conceded fewer. However, they are ranked sixth for shots conceded (61) and eighth for SoT conceded (22). Up next for De Bruyne is Southampton. The Saints have the worst defensive record in the league over the last six gameweeks, conceding 20 goals and keeping no clean sheets. They are ranked 20th for SoT conceded (37) and 17th for ‘big chances’ conceded (17). Our Fix Algorithm currently projects a point score of 11.5 for De Bruyne. 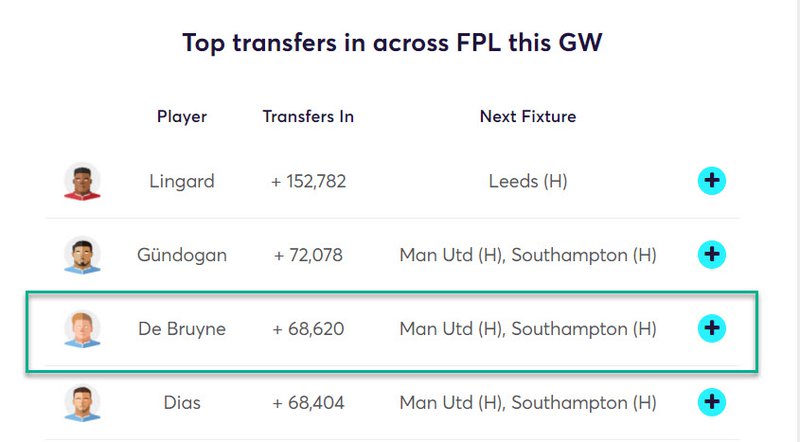 Kane has netted twice in four gameweeks since his return from injury, averaging 4.5 points per game (PPG). No forward has taken as many as his 18 shots during that period and he ranks joint-first with Bamford for SoT (six). Only Jesus (2.31), Richarlison (2.34), Antonio (2.35) and Maja (2.59) can better his 2.07 expected goals (xG) figure. Spurs are ranked fourth in the Fixture Analyser for the next four gameweeks and are one of eight teams who have a fixture in gameweek 29. Spurs have also scored seven goals over the last six gameweeks and only eight teams have fared worse. They are ranked 12th for shots (71) and ninth for SoT (26). Palace have conceded seven goals over the last six gameweeks, keeping two clean sheets. Only Villa (109) have conceded more shots than Palace’s 101 and the Eagles are ranked 14th for ‘big chances’ conceded (13). Our Fix Algorithm currently projects a point score of 6.7 for Kane.

Ings was restricted to a single shot against Everton on Monday night and has only scored one goal in the last four gameweeks. As the Stats Sandbox shows, the Englishman has taken 21 touches in the opposition’s box in that time, to rank joint-fourth amongst forwards. Meanwhile, his total of three ‘big chances’ ranks only behind Maja, Diagne, Jesus, Vardy and Werner (each four) and Richarlison (five). Southampton have scored just four goals over the last six gameweeks, but their underlying numbers have been promising. The Saints are ranked ninth for shots in the box (SiB) (44) and sixth for ‘big chances’ (14). Saints will play Sheff. Utd first, who have conceded 10 goals over the same period, only Everton, Liverpool (each 11) and Southampton themselves (20) have fared worse. No team has conceded more ‘big chances’ (18) than the Blades over the aforementioned period. Their second test is Man. City, who have conceded just four goals over the last six gameweeks, however, they have conceded in each of their last two matches. Our Fix Algorithm currently projects a point score of 7.9 for Ings.

Since completing his loan move to West Ham, Lingard has racked up three goals and two assists in five gameweeks to average 7.8 PPG as per our Fix Heatmaps feature. The 28-year-old ranks top amongst midfielders with a tally of nine SoT in that time, while only Raphinha, Neto and B. Fernandes (each 17) have attempted more than his 16 shots in total. No teammate can better his 20 touches in the opposition’s box. West Ham have scored 10 goals over the last six gameweeks and only Leeds (11), Man. Utd (16) and Man. City (20) have been more prolific. The Hammers are ranked sixth for SoT (28) and eighth for ‘big chances’ (12). Leeds have conceded nine goals over the last six gameweeks and only six teams have conceded more. They are ranked 15th for shots conceded (86) and 19th for SoT conceded (36). Our Fix Algorithm currently projects a point score of 4.5 for Lingard. 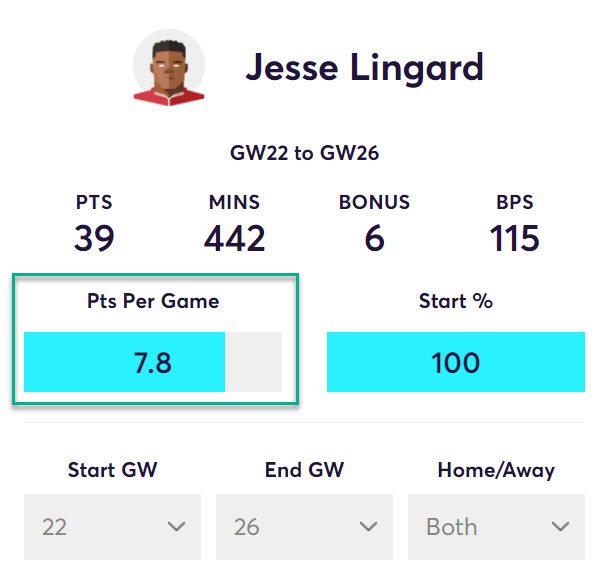 With seven clean sheets in 12 matches this calendar year, Dias has averaged 5.8 PPG. No defender has a higher total BPS score in that time (286), while only Cresswell (11) has picked up more than his nine bonus points. He ranks top amongst teammates for clearances (33), blocks (nine) and interceptions (18) over that period. The Portuguese is owned by 39.5% of the top 1000 as per our FPL Statistics feature. Man. City have conceded just four goals over the last six gameweeks and only Chelsea (two) have conceded fewer. No team has kept more clean sheets (four) or conceded fewer SoT (14) over the aforementioned period. Man. City's first opponented, Man. Utd, have scored 16 goals over the last six gameweeks but are ranked eighth for SiB conceded (48) and fourth for ‘big chances’ conceded (15). Second on the menu for Dias and co. is Southampton, who have scored just four goals over the last six gameweeks, only Sheff. Utd (three) have scored fewer. Meanwhile, Arsenal, Sheff. Utd (each 19), Burnley (18), West Brom (15) and Palace (13) are the only teams to have landed fewer SoT than the Saints’ 20. Our Fix Algorithm currently projects a point score of 8.9 for Dias. 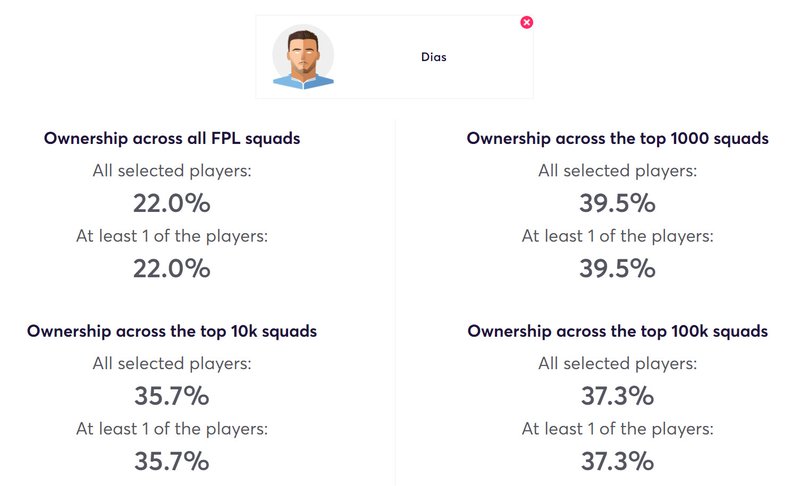