Ward-Prowse tops the Custom Stats xFPL Table for gameweek 27 with a score of 15.8. The midfielder took five shots, two of which were ‘big chances’ and also attempted two assists. De Bruyne and Mahrez led the way for shots with seven apiece, with the Belgian also topping the table for attempted assists (nine). The pair notched xFPL scores of 14.5 and 10.6 respectively. Alonso’s numbers are eye catching. The Spaniard attempted four assists and also took two shots, registering an xFPL score of 8.8. Coady is worth monitoring, the centre-back was joint-top for ‘big chances’ (two), notching an xFPL score of 12.6.

With Kane cementing his status as an almost essential FPL asset, managers are looking to double up on the Spurs attack with both Son and Bale looking like viable options. The two are compared over the last two gameweeks using our Fix Heatmaps feature. As the attacking radar shows, Son is playing more of a creative role while Bale is providing the goal-threat. Even though they have taken a similar number of shots (six to seven), the Welshman’s expected goals (xG) figure of 1.80 is far ahead of the South Korean’s 0.58. However, in terms of creativity, Son is far ahead with 3.04 expected assists (xA) to Bale’s 0.39 due to six ‘big chances’ created versus one. Both look great options with Bale arguably the more explosive asset.

Salah has now blanked in four consecutive matches and his numbers over the last two gameweeks are analysed using the Stats Sandbox feature. Numbers per game are used since some teams have played more fixtures. The Egyptian is ranked 11th for shots in the box (SiB) per game (1.67) amongst midfielders and ninth for xG (0.36). He is ranked 24th for shots on target (SoT) (0.67) and 40th for attempted assists (1.00) per match. These are very poor numbers for an asset that has traditionally relied on a large volume of shots to deliver FPL returns. With midfield assets like Bale and De Bruyne delivering points, it is difficult to justify Salah’s 12.5 price at the moment. 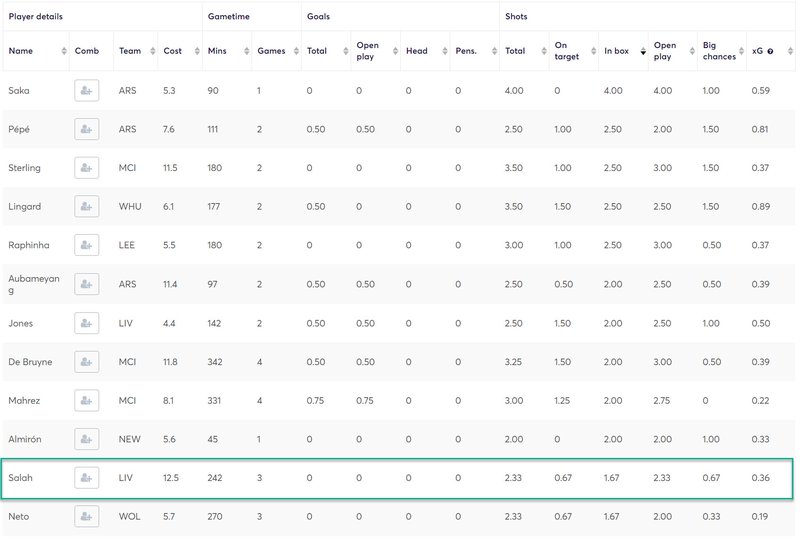