With five goals over the last six gameweeks, Salah looks truly back to his effervescent best and the Egyptian has taken a whopping 27 shots over that period, nine more than second-placed midfielder De Bruyne (18). In fact, the Egyptian is top for shots in the box (SiB), (22), ‘big chances’ (seven), shots on target (SoT) (11) and ‘big chances’ created (seven) amongst midfielders. He trails only Maddison (20) for chances created (18). No team has scored more goals than Liverpool’s 14 or registered more ‘big chances’ (23) over the last six gameweeks and they are second for SoT (41) only to Leicester (43). Norwich have conceded nine goals over the aforementioned period, only Bournemouth (12), West Ham (13) and Villa (14) have been more porous. They are ranked seventh-worst for SoT conceded (27) and 10th for ‘big chances’ conceded (11). Our Fix Algorithm projects a point score of 8.4 for Salah.

The goals may have dried up for De Bruyne with just one in the past six gameweeks, but it has not been for want of trying, the Belgian has attempted 18 shots over the aforementioned period, second only to Salah amongst midfielders. As the Stats Sandbox shows, his creativity numbers are excellent, only Maddison (20) has created more chances than his 18 and only Traore, Perez (both five) and Salah (seven) have created more ‘big chances’. Man. City have scored 13 goals over the last six gameweeks, only Liverpool (14) have been more prolific. They lead the way for shots (116) and SiB (75). Only Villa (14) have conceded more goals than the Hammers’ 13 over the same period and only Newcastle (37) allowed opponents more SoT than their 35. They are also joint-bottom with Villa for ‘big chances’ conceded (23). Our Fix Algorithm projects a point score of 6.6 for the Belgian.

Son has now registered back-to-back goals in the last two gameweeks and is providing the majority of Spurs’ goal threat in Kane’s absence as shown by his 2.0 xG (expected goals) in our Match Preview feature.. Only De Bruyne (18) and Salah (27) have attempted more shots amongst midfielders over the last six gameweeks and he is also ranked fourth for SiB (11) trailing only Mane (12), Mahrez (12) and Salah (22). Only Armstrong (seven) and Salah (11) have landed more SoT than the Korean’s six. Although Spurs have scored only six goals in as many gameweeks, four of these were in their last two matches indicating that they have found a bit of form. They are ranked 11th for shots (73) and 10th for SoT (26) over that period. Villa’s defensive statistics give plenty of reason to think they can improve on those numbers. No team has conceded more goals (14) or allowed opponents more SiB (63) than the Birmingham side over the past six gameweeks. They are also bottom for ‘big chances’ conceded (23). Our Fix Algorithm projects a point score of 5.2 for the Korean. 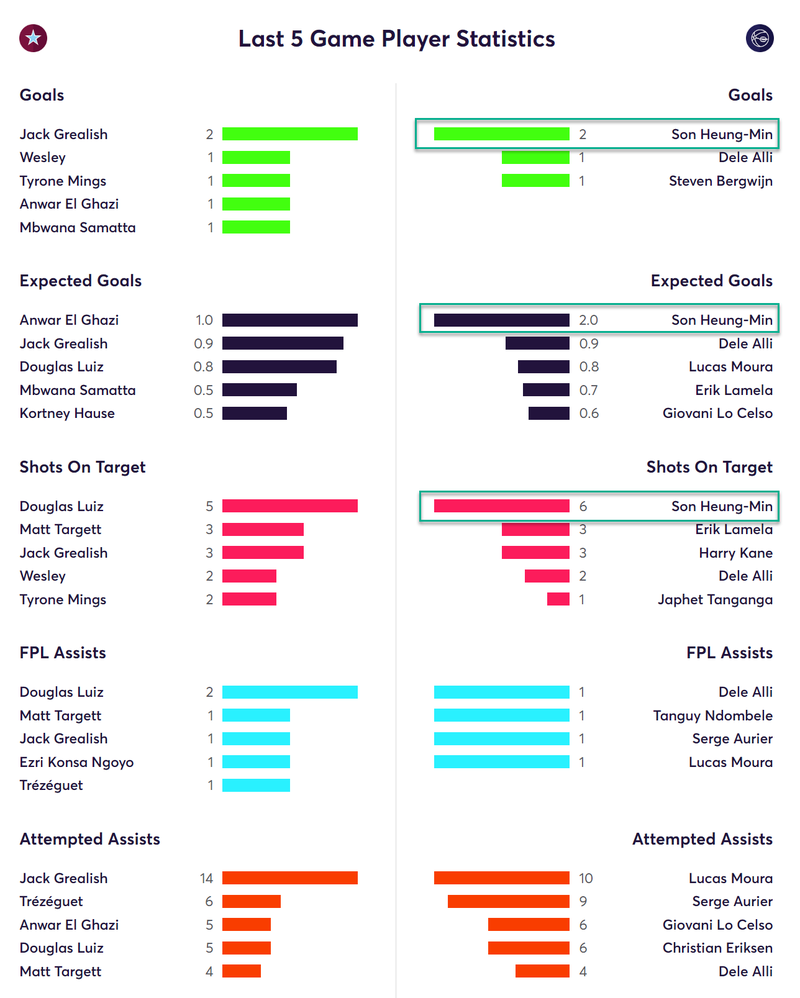