Son tops the Custom Stats xFPL table for gameweek 26 with a score of 16.6. The Korean attempted a whopping nine assists, five of which were ‘big chances’ and also took four shots. Richarlison also posted impressive numbers, no player took more shots (eight) or shots in the box (SiB) (six) than the Brazilian, notching an xFPL score of 14.5. The more popular Calvert-Lewin only managed three SiB leading to a 6.2 xFPL score. No player was afforded more ‘big chances’ (three) than Kane, the Englishman also led the way for shots on target (SoT) (four) and created three chances, registering an xFPL score of 10.6.

H. Barnes suffered an injury in Leicester’s game against Arsenal and the popular replacement options are compared using the Fix Comparison Matrix for the last four gameweeks. Averages are used since some teams have had an extra game in 25/26. Chelsea’s match winner Mount leads the way for FPL Points (7.0), goals (0.6) and ‘big chances’ (0.4). He also comes in third for attempted assists (2.2). Raphinha is top in terms of creativity with 3.6 attempted assists per game, he also comes in second for shots (2.8) and SoT (1.0). Lingard is top by some distance for SoT (1.5) and comes in third for ‘big chances’ (0.3). It is worth mentioning that he misses gameweek 28 against Man. Utd as per the terms of his loan agreement. 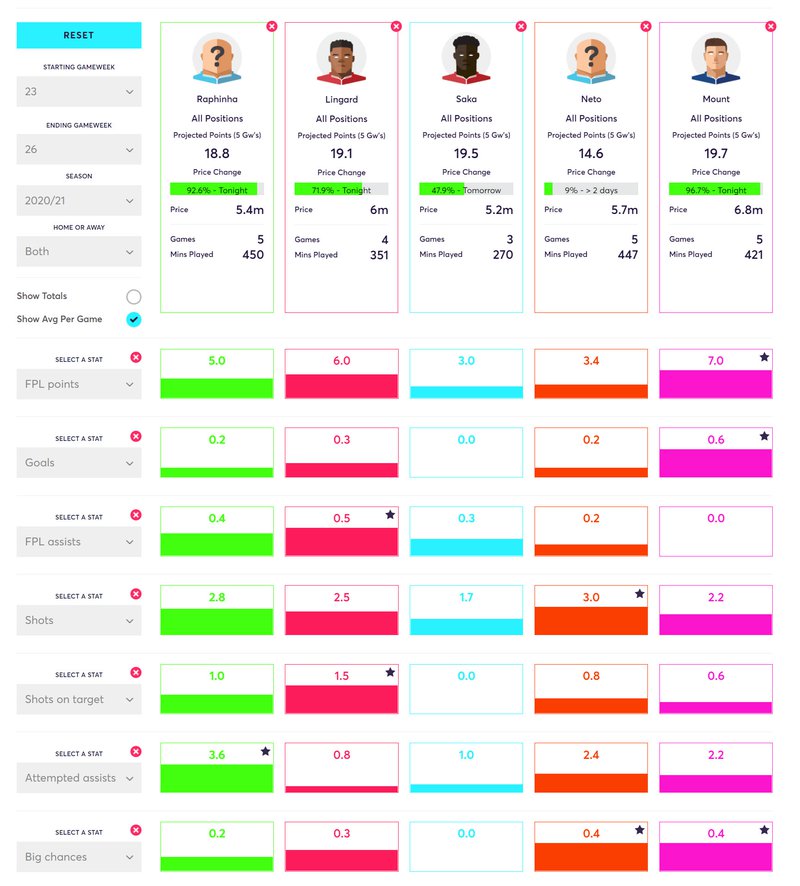 Man. City have another double gameweek upcoming and their assets are analyzed for the last four gameweeks using our Stats Sandbox feature. Gundogan leads the way for xFPL score (34.64), the German (10) trails only Jesus (13) for shots. Sterling leads the way for attempted assists (eight) and is joint-top with the German for shots (10). Cancelo also posts impressive numbers, coming in fourth for attempted assists (six) and seventh for shots (seven). Mahrez has scored two goals from just three SoT, none of which were ‘big chances’.