Bamford has found the back of the net 12 times already this season, only Kane and Calvert-Lewin (13) can better that number amongst forwards. No striker has taken more shots in the box (SiB) (70) or landed more shots on target (SoT) (35) while only Vardy (24) has been afforded more ‘big chances’ than his 21. He is the second most transferred in player this week as per our Transfer Stats feature with nearly 250,000 new owners. Leeds have scored 40 goals this season and only Chelsea (40), Leicester (42), Liverpool (45), Man. City (46) and Man. Utd (50) have scored more. Their total of 228 SiB can only be bettered by Man. City (232) and Liverpool (240). Wolves have conceded 32 goals this season and only six teams have conceded more. They are ranked seventh for both shots conceded (255) and ‘big chances’ conceded (39). Southampton have conceded 39 goals this season, only Sheff. Utd, Newcastle (each 40), Leeds, Palace (each 42) and West Brom (55) have shipped more. The Saints are ranked 12th for SoT conceded (99) and 14th for ‘big chances’ conceded (48). Our Fix Algorithm currently projects a point score of 8.6 for Bamford. 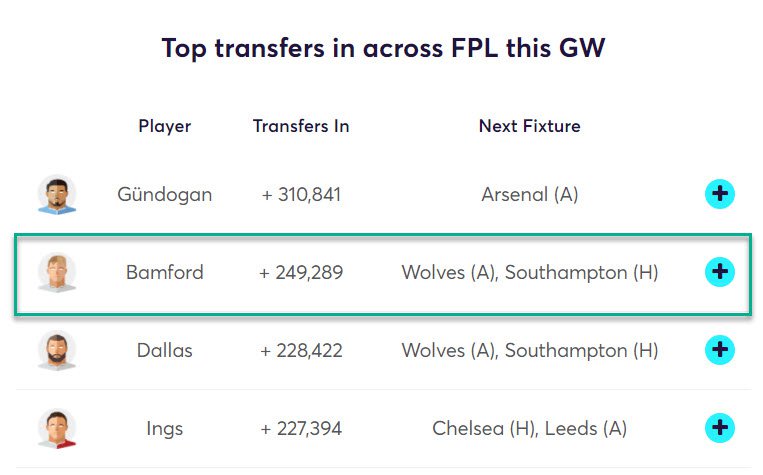 Ings’ total of eight goals is only bettered by six forwards this season and the forward is a penalty box predator, taking 30 of his 38 shots from inside the box. Averaging 4.9 points per game as per our Fix Heatmaps feature, only six forwards can beat him for SoT (20) despite a limited gametime of 1472 minutes. Southampton are ranked 12th for goals scored (30), 13th for SoT (93) and 14th for ‘big chances’ (35) this season. Chelsea have conceded 24 goals this campaign, only Man. City (15) have conceded fewer. The London side are ranked third for ‘big chances’ conceded (32). Leeds are Saints' second opponents and have shipped 42 goals this season and only West Brom (55) have been more porous. The Baggies (151) are the only side to have allowed opponents more SoT than Leeds’ 126. Our Fix Algorithm currently projects a point score of 8.5 for Ings. 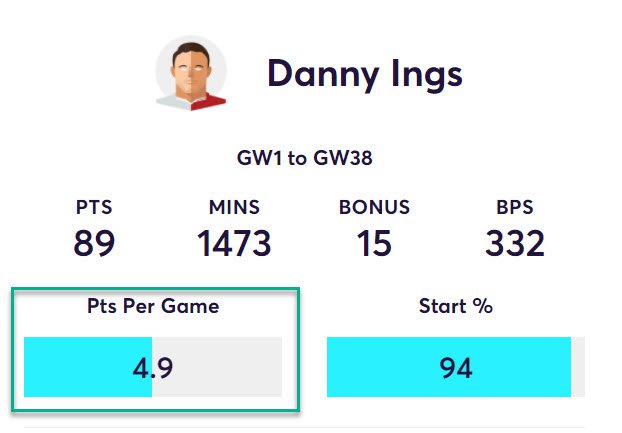