With Mané suffering an injury, the onus is greater on Salah to provide the goals for Liverpool and the Egyptian tops the table for shots (22), shots in the box (SiB) (18) and shots on target (SoT) (eight) amongst midfielders for the last six gameweeks. Only Martial (five) and Mané (six) have been afforded more ‘big chances’ than Salah’s four. He has also created four ‘big chances’ with only De Bruyne (five) and Traore (six) creating more. Liverpool have scored 12 goals over the last six gameweeks and only Man. City (15) have been more prolific. They top the attacking metrics for both SiB (67) and ‘big chances’ (19). Southampton have tightened up defensively, only Watford (four) and Liverpool (one) conceded fewer goals than the Saints’ (five) over the aforementioned period. The South Coast outfit are also ranked fifth-best for SoT conceded (19). However, a trip to Anfield is likely to prove a stern test and our Fix Algorithm projects a whopping point score of 7.6 for Salah.

The form player in the league, Agüero has scored seven goals in the last six gameweeks, more than any other player. As the Stats Sandbox shows, although he is ranked ninth for SiB (13) amongst forwards, he is top for both SoT (10) and ‘big chances’ (seven) which shows his pedigree. No team has scored more goals than Man. City’s 15 over the last six gameweeks and the defending Champions are top for shots (104) and joint-top for ‘big chances’ (19). Only Leicester (39) have landed more SoT than their 36. Spurs have conceded six goals over the same period, keeping just one clean sheet. The North London club are ranked eighth for shots conceded (69) and 10th for ‘big chances’ conceded (11). Our Fix Algorithm projects a point score of 3.9 for the Argentine, slightly lower than anticipated which is a result of Pep's unpredictable lineups with Agüero sitting on a 66% chance of starting according to our Predictive Lineups feature. 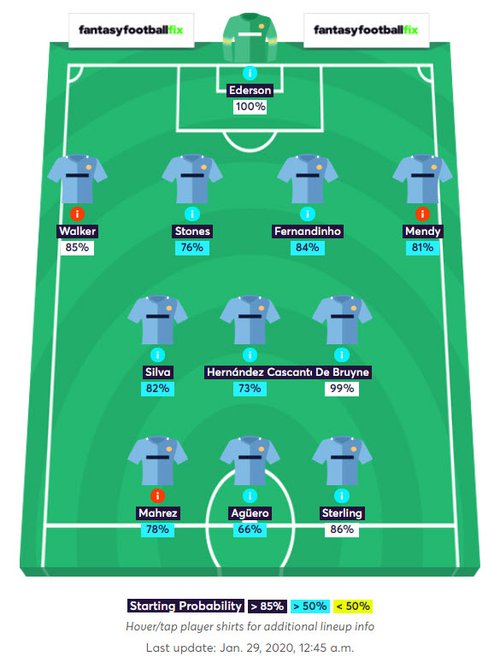 No midfielder has scored more goals than Martial (four) over the last six gameweeks and the Frenchman’s 12 SiB is beaten only by Mané (15) and Salah (18). He is joint-first for SoT (eight) with Salah and only Mané (six) has been afforded more ‘big chances’ than his five. As per our FPL Statistics feature, he is owned by just 14.2% of all Fantasy Premier League (FPL) squads, but his ownership is more than double that (28.8%) in the top 1000 so he is a popular pick amongst the top players. Only Leicester (11), Liverpool (12) and Man. City (15) have scored more goals than the Red Devils’ 10 over the past six gameweeks and only Chelsea (95) and Man. City (104) have taken more shots than their 92. They only trail Man. City (36) and Leicester (39) for SoT with 35. Their opponents Wolves have conceded 10 goals over the same period, keeping no clean sheets. Only Newcastle, Villa and Bournemouth (all 12) have shipped more goals. Wolves have also allowed opponents 21 SoT and ‘big chances’ over that period. Our Fix Algorithm projects a point score of 4.9 for Martial. 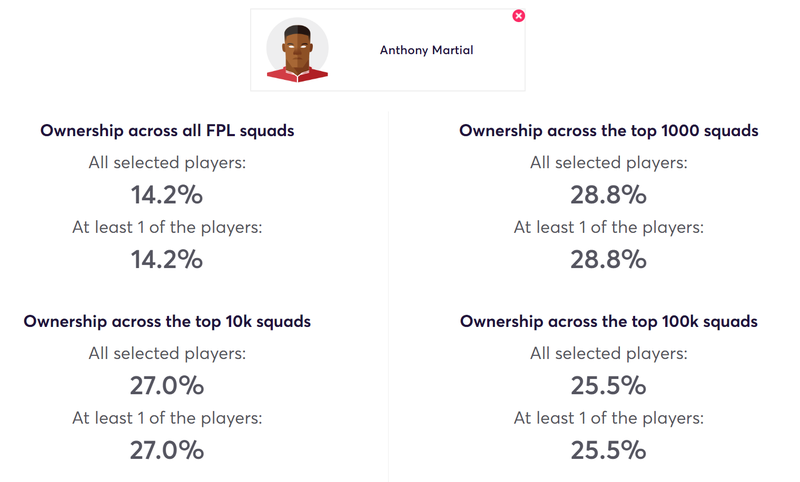