No Fantasy Premier League (FPL) forward has earned more points than Bamford (28) over the last four gameweeks, where he has amassed two goals and three assists. The 27-year-old has taken 12 shots in the box (SiB) in that time to rank joint-first with Watkins, while his seven shots on target (SoT) is a league-leading figure. Werner is the only forward to have taken more touches in the opposition’s penalty box (35 to 25). He is the third most transferred in player this week as per our Transfer Stats feature. Leeds have scored 10 goals over the last six gameweeks, only Leicester, Arsenal (each 11), West Ham (13), Man. Utd (16) and Man. City (21) have scored more. Leeds are ranked eighth for SoT (29) and 12th for SiB (50) over that period. Wolves have conceded six goals over as many gameweeks, keeping just two clean sheets. They are ranked sixth for shots conceded (66) and fourth for ‘big chances’ conceded (nine). Southampton have conceded 20 goals over the last six gameweeks, more than any other side. No team has conceded more ‘big chances’ than the Saints (18) over that period. Our Fix Algorithm currently projects a point score of 8.6 for Bamford. 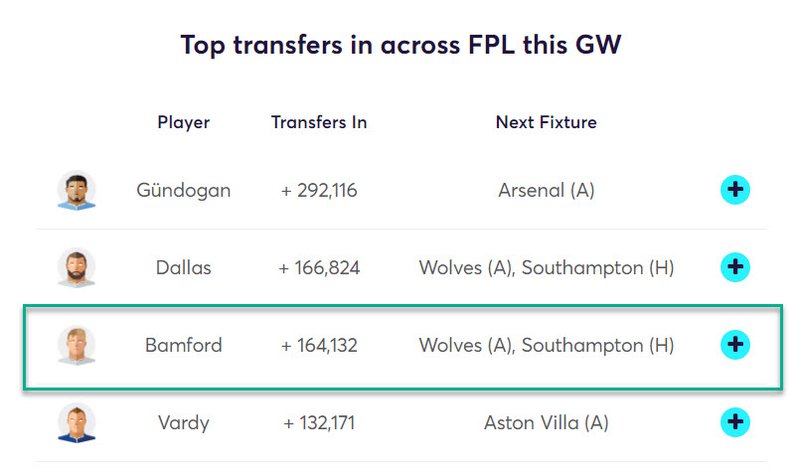 Ings opened the scoring against Wolves with a delightful volley, ending a run of four matches without a goal. The Englishman has landed five SoT in the last five gameweeks ranking just behind Bamford, Calvert-Lewin (each seven) and Watkins (10), amongst forwards. Just three forwards can better his 0.85 expected assists (xA) figure and only Bamford (three) has created more 'big chances' than his two. The Saints' man is close to a rise in price which can be monitored using our Price Predictor feature, as seen below. Southampton have scored just four goals over the last six gameweeks, the lowest in the league. However, they are ranked 14th for shots (65) and surprisingly 10th for ‘big chances’ (11). Chelsea have conceded just three goals over the last six gameweeks, keeping five clean sheets. They are ranked second for SoT conceded (17) and fourth for ‘big chances’ conceded (nine), but on their day, Southampton have shown this season that they can cause trouble for any opponent. Leeds have conceded nine goals over the same period and only six teams have fared worse. Meanwhile, only Palace (33), Southampton (34), Burnley (38), Villa (40) and West Brom (44) have allowed opponents more SoT than their 29. Our Fix Algorithm currently projects a point score of 9.2 for Ings.

B. Fernandes has produced three goals and two assists in the last four gameweeks, to average 9.0 points per game (PPG). Meanwhile, only Salah has taken more shots amongst midfielders (16 to 15) and he ranks joint-first with Salah and Lingard for SoT (seven). His total of three 'big chances' created ranks joint-first, with only Gündoğan (1.57) and Maddison (1.62) able to better his 1.56 xA figure. He is the most owned player in the top 1000 with 99.2% ownership as per our FPL Statistics feature. Man. Utd have scored 16 goals over the last six gameweeks, only Man. City (21) have been more prolific. It is only the league leaders that can beat Man. Utd for shots (105 to 101) and ‘big chances’ (20 to 19). Newcastle have conceded 13 goals over the last six gameweeks and only West Brom (16) and Southampton (20) have been more porous. While, only Southampton (18) have allowed opponents more ‘big chances’ than Newcastle (18), and only West Brom (104), Burnley (115) and Villa (125) have allowed opponents more shots than the Magpies’ 92. Our Fix Algorithm currently projects a point score of 8.2 for the Portuguese man. 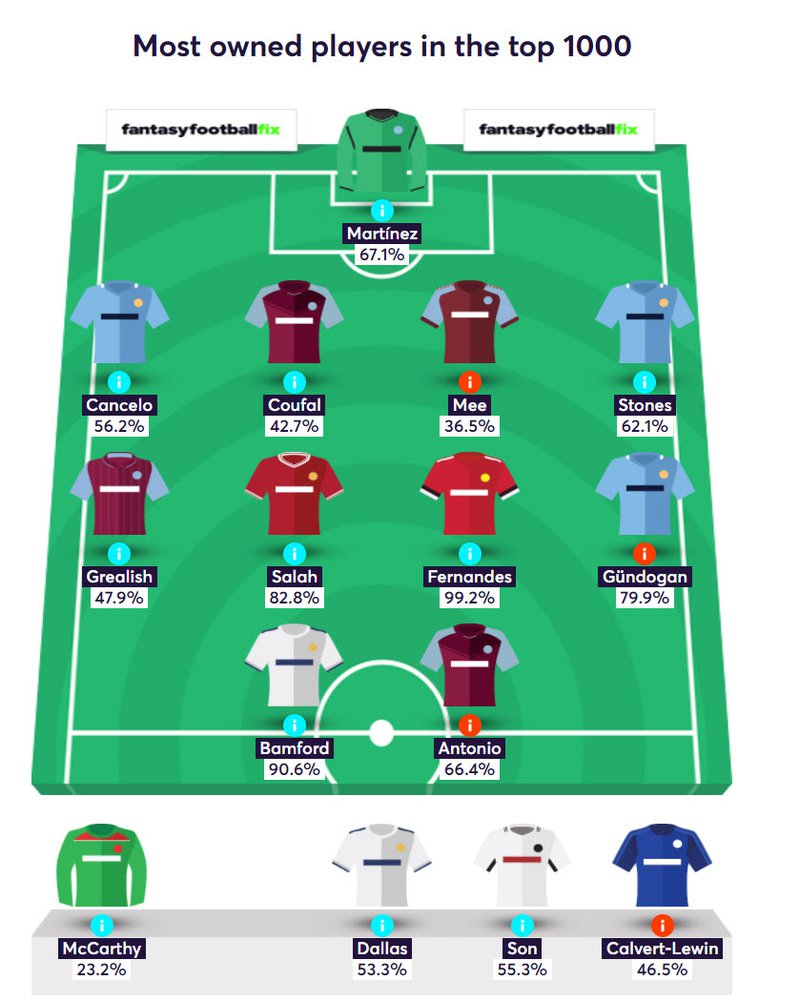 Since making his first start in gameweek nine, no teammate has earned more FPL points than Raphinha (77) with an average of 5.1 PPG as per our Fix Heatmaps feature. Amongst midfielders, only De Bruyne (seven) and Fernandes (eight) have provided more than his six assists during that period (gameweeks 9 to 24). He ranks eighth for attempted assists (30) and joint-fourth for SoT (16) and SiB (27). Leeds have scored 40 goals this season and only Chelsea (40), Leicester (42), Liverpool (45), Man. City (46) and Man. Utd (50) have been more prolific. Their total of 228 SiB can only be bettered by Man. City (232) and Liverpool (240). Wolves have conceded 32 goals this season and only six teams have conceded more. They are ranked seventh for both shots conceded (255) and ‘big chances’ conceded (39). Southampton have conceded 39 goals this season and only Sheff. Utd, Newcastle (each 40), Leeds, Palace (each 42) and West Brom (55) have shipped more. The South Coast side are ranked 12th for SoT conceded (99) and 14th for ‘big chances’ conceded (48). Our Fix Algorithm currently projects a point score of 7.7 for Raphinha. 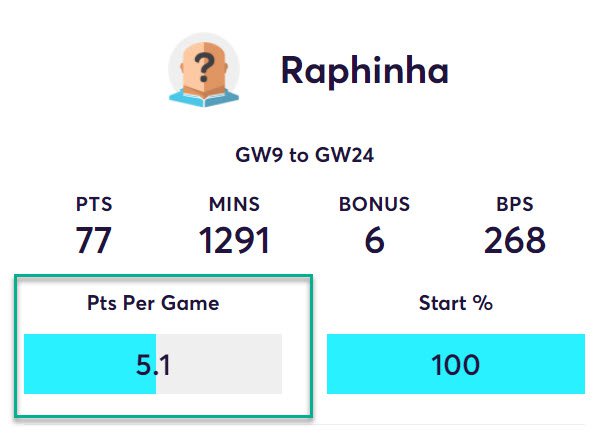 Playing in an ‘out-of-position’ midfield role, Dallas has averaged 4.8 FPL PPG over the last four gameweeks, weighing in with one goal and one assist during that spell. As the Stats Sandbox shows, his total of five shots in that time ranks joint-fifth amongst defenders, behind Schär, Lowton, Burn (each six) and Alonso (nine). Only five defenders can better his four attempted assists. Leeds have conceded nine goals over the last six gameweeks, keeping one clean sheet. Only Wolves (38), Brighton (33), Chelsea (30) and Man. City (20) have conceded fewer SiB than their 40 over that period. Wolves have scored just six goals over the same time period and only Palace, Fulham (each five), Brighton and Southampton (each four) have scored fewer. Southampton (21), West Brom (19), Everton (16) and Palace (14) are the only teams to have landed fewer SoT than Wolves' 22. Leeds second opponents' Southampton have scored just four goals over the last six gameweeks, the lowest in the league. Only West Brom (19), Everton (16) and Palace (14) have landed fewer SoT than their 21. Our Fix Algorithm currently projects a point score of 6.1 for Dallas.