Over the last six gameweeks, no midfielder has taken more shots in the box (SiB) than Gundögan (13) and he also leads the way for ‘big chances’ (six). B. Fernandes (10) is the only played to have landed more SoT than his eight amongst midfielders. He is a popular transfer target this week with nearly half a million managers bringing him in as per our Transfer Stats feature.  Man. City have scored 43 goals this season with only Liverpool (44) and Man. Utd (49) being more prolific. The league leaders are top for ‘big chances’ (66) while only Man. Utd (133) have landed more SoT than their 123. Spurs have conceded 22 goals this season and only Man. City have been more frugal (14). However, the Lilywhites are ranked 14th for shots conceded (289) and 10th for SoT conceded (88). Their second opponents, Everton, have conceded 28 goals this season, keeping just four clean sheets. Only West Brom (two) and Sheff. Utd (one) have kept fewer. They are ranked 11th for shots conceded (270). Our Fix Algorithm currently projects a point score of 9.3 for the German. 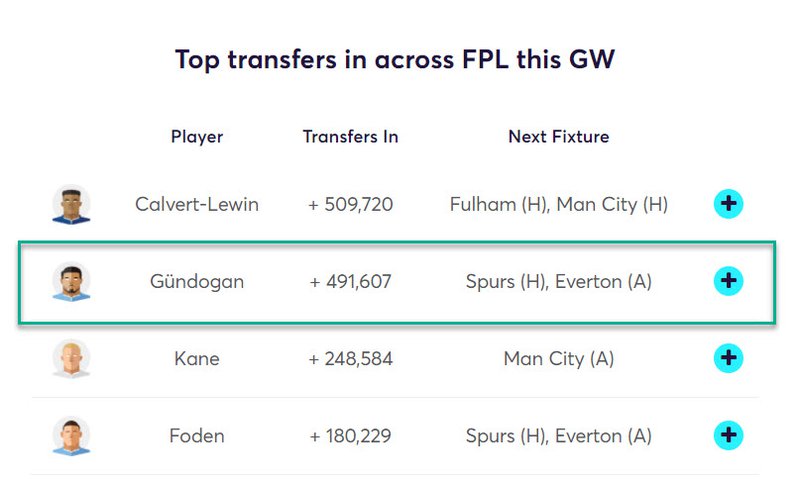 Calvert-Lewin is a doubt for gameweek 24 after suffering an injury in their midweek F.A. Cup tie, however, Richarlison managed to score a brace in that game, and could be a great differential captain pick. As the Stats Sandbox shows, Calvert-Lewin (31) is the only player to have landed more SoT than Richarlison (14) amongst Everton players, and the Brazilian is also second for shots (39) and ‘big chances’ (six). He is ranked fourth for chances created (12). Everton have scored 16 goals in their 10 home matches, only six teams have scored more on home turf. Up first, Fulham have conceded 31 goals this season and only six teams have been more porous. They have kept just five clean sheets and only Newcastle, Palace (each four), West Brom (two) and Sheff. Utd (one) have kept fewer. Meanwhile, only Leeds (57) and West Brom (62) have conceded more ‘big chances’ than the Cottagers (53). Man. City have conceded just 14 goals this season, keeping 13 clean sheets and conceding the fewest SoT (48) and ‘big chances’ (20) in the league. Our Fix Algorithm currently projects a point score of 6.2 for Richarlison.