Salah scored in the dying minutes against Man. Utd taking his total to two goals over the past five gameweeks, only Martial (four) has scored more amongst midfielders. The Egyptian is top for shots (16) and only Mané (seven) has landed more shots on target (SoT) than his six. He has been afforded four ‘big chances’ with only Martial (five) and Mané (six) registering more. His total of 13 chances created over this period is bettered only by Willian (16) and Buendia (18), and no midfielder has created more ‘big chances’ than his four. A popular transfer target this week, he has been brought in by nearly 150,000 managers as per our Transfer Stats feature. Liverpool’s total of 10 goals scored over the last five gameweeks is beaten only by Man. City (14) and no team have created more ‘big chances’ than the Reds’ 17. Their first opponents Wolves have conceded eight goals over their last five matches keeping no clean sheets. Only Leicester, Burnley (both nine), Newcastle (10), Bournemouth (11) and Villa (11) have conceded more. West ham have conceded six goals over the same period and only Villa (18) have conceded more ‘big chances’ than the Hammers’ 17. Our Fix Algorithm projects a point score of 11.9 for Salah. 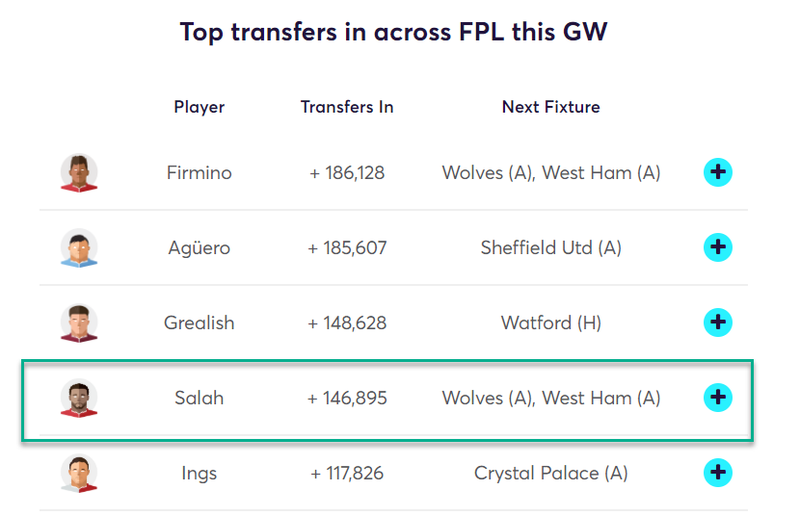 Firmino was unfortunate to have his goal ruled out against Man. Utd in gameweek 23 and only Rashford, Calvert-Lewin (both four) and Agüero (six) have scored more goals than the Brazilian’s three amongst forwards over the last five gameweeks. His total of 16 shots in the box (SiB) is only beaten by Ings and Calvert-Lewin (both 17) and only Agüero, Jesus and Calvert-Lewin (all six) have registered more ‘big chances’ than his five. As always his creativity numbers are excellent and only Deulofeu and Deeney (both 11) have created more chances than his nine amongst forwards. His ownership is currently below 7% in the top 1000 as per our FPL Statistics feature, so the Brazilian is a powerful differential this week.  No team has taken more SiB than Liverpool’s 57 over the past five matches and only Man. Utd (28), Leicester (31) and Man. City (31) have landed more SoT than the Reds’ 27. Wolves defensive numbers are decent on paper with only Southampton (24) and Liverpool (20) allowing opponents fewer shots than their 28 but the Hammers’ numbers are far more encouraging. Only seven teams have conceded more SiB than the Hammers’ 41 over the last five matches. Our Fix Algorithm projects a point score of 9.6 for the Brazilian. 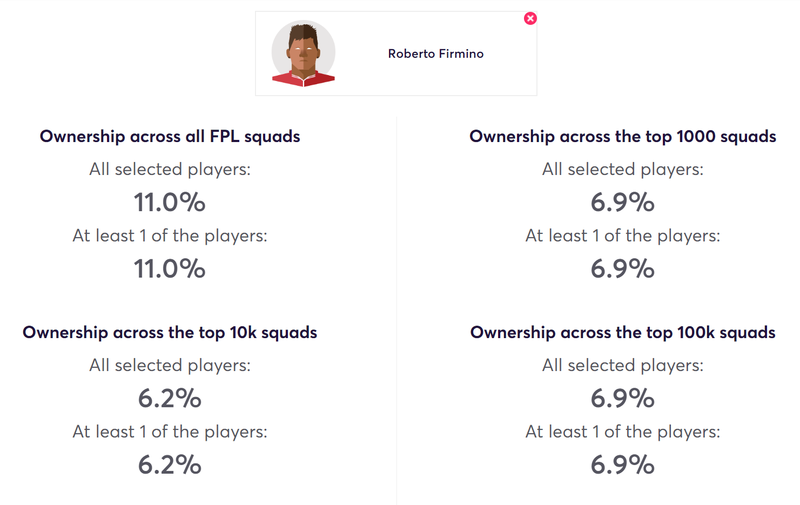 Martial was unlucky not to score against Liverpool and with the injury to Rashford the goal-scoring burden on the Frenchman increases even further. He is rated 100% to start as per our Predicted Lineups feature in the Englishman's absence. No midfielder has scored more goals than his four over the last five gameweeks and he only trails Mané for SoT (six to seven) and ‘big chances’ (five to six). The Red Devils have scored 10 goals over the aforementioned period and only Man. City (14) have been more prolific. Their total of 28 SoT is bettered only by Leicester and Man. City (both 31) and only Wolves (14), Watford (15), Man. City (16) and Liverpool (17) are the only teams to have registered more ‘big chances’ than their 13. Burnley have conceded nine goals over the past five matches, keeping no clean sheets. They have allowed opponents 82 shots and only Villa (88) and Newcastle (99) have been more generous, while it is only the Magpies that have allowed more SoT (35) than their 31. Our Fix Algorithm projects a point score of 5.8 for the Frenchman. 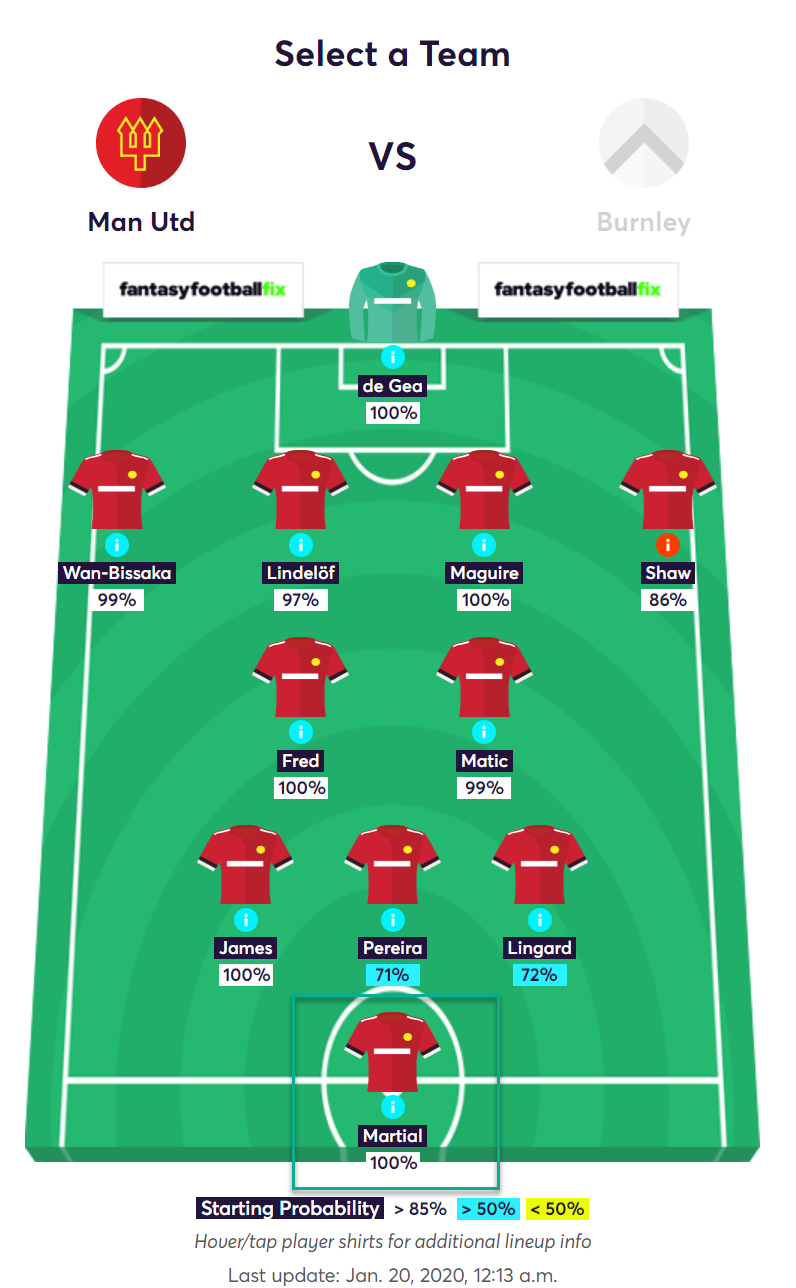 Haller’s underlying numbers have improved under Moyes, and only Abraham (15), Firmino (16), Ings and Calvert-Lewin (both 17) have taken more SiB than the Frenchman’s 13. As per our Match Statistics feature, over the last five matches only Noble (two) has scored more goals for the Hammers than Haller (one) and his expected goals (xG) figure of 1.6 is double that of Noble (0.8). He is top amongst their players for SoT as well (four). Only six teams have scored more goals than the Hammers’ seven over the last five matches and they are ranked sixth for SiB (43). Leicester’s defensive numbers have been poor recently, the Foxes have conceded nine goals over the same period keeping just one clean sheet. They have allowed opponents 12 ‘big chances’ and only West Ham, Newcastle (both 17) and Villa (18) have been more generous. He might not get as much joy against Liverpool with the league leaders conceding no goals in the last five matches. While he is a more risky pick he could deliver, and at least the Hammers are at home for their fixture against Liverpool. Our Fix Algorithm projects a point score of 5.9 for Haller. 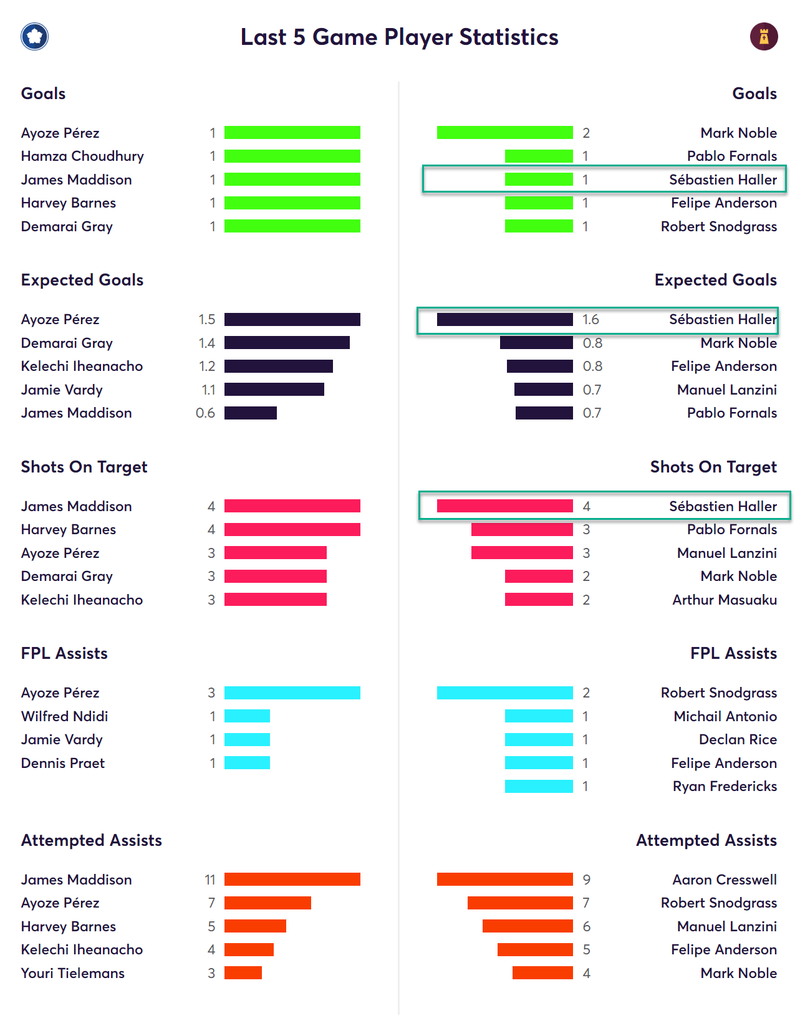