With 12 goals this season, Son trails only Salah (15) for goals amongst midfielders, while only Rashford, Mané (each 23), B. Fernandes and Salah (each 31) have landed more shots on target (SoT) than his 21. In fact, no midfielder has been afforded more ‘big chances’ than the South Korean’s 18. Spurs have scored 34 goals this season and only seven teams have managed more. Their total of 49 ‘big chances’ is only bettered by Villa (55), Man. City, Liverpool (each 61) and Man. Utd (62). West Brom have conceded 52 goals this season, no team has shipped in more. Meanwhile, Sheff. Utd (one) are the only team to have kept fewer clean sheets than the Baggies (two). The midlands club are also bottom for both SoT conceded (139) and ‘big chances’ conceded (58). Our Fix Algorithm currently projects a point score of 7.6 for Son.

B. Fernandes took his total of goals to 12 for the season after netting against Southampton in gameweek 22, and only Salah (15) has been more prolific amongst midfielders. As the Stats Sandbox shows, the Portuguese is top for both shots (74) and SoT (31) amongst midfielders this season. He also leads the way for ‘big chances’ created (11) while only Grealish (12) has managed more than his 11 assists. Man. Utd have scored 46 goals this season, more than any other side and also lead the way for SoT (128) and ‘big chances’ (62). Everton have conceded 25 goals this season keeping just four clean sheets. They have allowed opponents 37 ‘big chances’ and 83 SoT over those matches. Our Fix Algorithm currently projects a point score of 7.2 for B. Fernandes.

Antonio has been in red hot form since his return to the starting line-up in gameweek 19, notching two goals and three assists over the last four gameweeks. No forward has taken more shots (17) or been afforded more ‘big chances’ (five) over that period. He is the third-most transferred in player this week as per our Transfer Stats feature. West Ham have scored 10 goals over the last four gameweeks, only Man. Utd (12) and Man. City (14) have managed to find the net more frequently. Their total of 47 shots in the box (SiB) can only be bettered by Liverpool (51) and Man. City (53), while only Man. Utd (16) have been afforded more ‘big chances’ than the Hammers’ 12. Fulham have conceded seven goals over the same period and only Palace, Villa (each eight), Newcastle (nine), West Brom (13) and Southampton (15) have shipped more. The Saints (16) are the only club to have allowed opponents more ‘big chances’ than the Cottagers (12). Our Fix Algorithm currently projects a point score of 4.6 for Antonio. 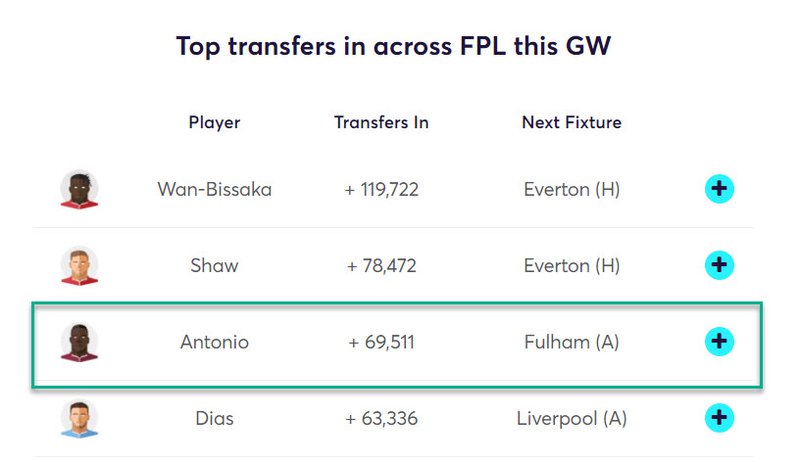