With one goal and two assists in his last five outings (gameweeks 17 to 21), Son has averaged 4.8 Fantasy Premier League (FPL) points per game (PPG). As our Stats Sandbox feature shows, despite ranking joint-eighth amongst midfielders for shots taken (12) during that period, no player across all positions has had more than his six ‘big chances’. The South Korean has also created two big chances and ranks top amongst teammates with an expected assists figure (xA) of 0.86. Spurs have scored eight goals over the last six gameweeks and only Arsenal (11), Man. Utd (15) and Man. City (16) have scored more. Their total of 13 ‘big chances’ is only bettered by Man. City (19) and Man. Utd (20). West Brom have conceded 17 goals over the last six gameweeks, keeping no clean sheets and no team has fared worse. The Baggies also bottom for shots on target (SoT) conceded while only Fulham (17) and Southampton (18) have allowed opponents more ‘big chances’ than their 16. Our Fix Algorithm currently projects a point score of 8.4 for the South Korean.

Man. Utd’s 9-0 win over Southampton saw B. Fernandes record his ninth double-digit return of the season. Over the last four gameweeks (gameweeks 19 to 22), no FPL midfielder has taken as many as his total of 19 shots, or landed as many as his six SoT. He also the leads the way with five ‘big chances’ created, while only Mount (15) can better his 12 attempted assists. Man. Utd have scored 15 goals over the last six gameweeks and only Man. City (16) have been more prolific. They are second only to Burnley for Attack Difficulty over the next three gameweeks in our Fixture Analyzer. The Red Devils are top of the league for both shots (109) and ‘big chances’ (20). Everton have conceded five goals over the same period, allowing opponents 17 SoT and seven ‘big chances’. Our Fix Algorithm currently projects a point score of 6.6 for B. Fernandes.

Antonio has now started four consecutive matches (gameweeks 19 to 22), where he has averaged 6.3 PPG as per our Fix Heatmaps feature. Amongst FPL forwards, only Watkins has landed more shots on target during that period (six to five), while only Wilson (12) and Watkins (11) can better his 10 shots in the box (SiB). Only Cavani (5) has had more big chances than his 4. West Ham have scored eight goals over the last six gameweeks, only Arsenal (11), Man. Utd (15) and Man. City (16) have found the back of the net more often. The Hammers are ranked eighth for SiB (43) and third for ‘big chances’ (13). Meanwhile, Fulham have conceded six goals in as many gameweeks and are ranked 14th for SoT conceded (25). Only Southampton (18) have given up more ‘big chances’ than the Cottagers (17). Our Fix Algorithm currently projects a point score of 5.0 for Antonio. 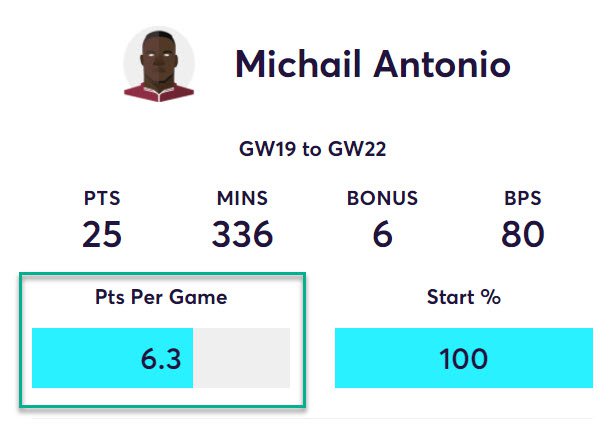 Watkins has bagged two goals in his last four matches (gameweeks 19 to 22) to average 4.0 PPG. No FPL forward has fired as many as his 11 SiB across that spell, or landed as many as his eight SoT. Only Cavani, Wilson and Antonio (each four) can better his three ‘big chances’. He is a popular pick with 18.1% ownership in all FPL squads as per our FPL Statistics feature. Villa have scored six goals over the last six gameweeks and their total of 28 SoT is only bettered by Arsenal (31), Man. City (39) and Man. Utd (46). Meanwhile, only Man. City (19) and Man. Utd (20) have fashioned more ‘big chances’ than their 13. Arsenal have conceded just three goals over the last six gameweeks but will be without D. Luiz and Leno following the pair’s red cards against Wolves. The Gunners have allowed opponents 61 shots and seven ‘big chances’ over the aforementioned period. Our Fix Algorithm currently projects a point score of 3.8 for Watkins. 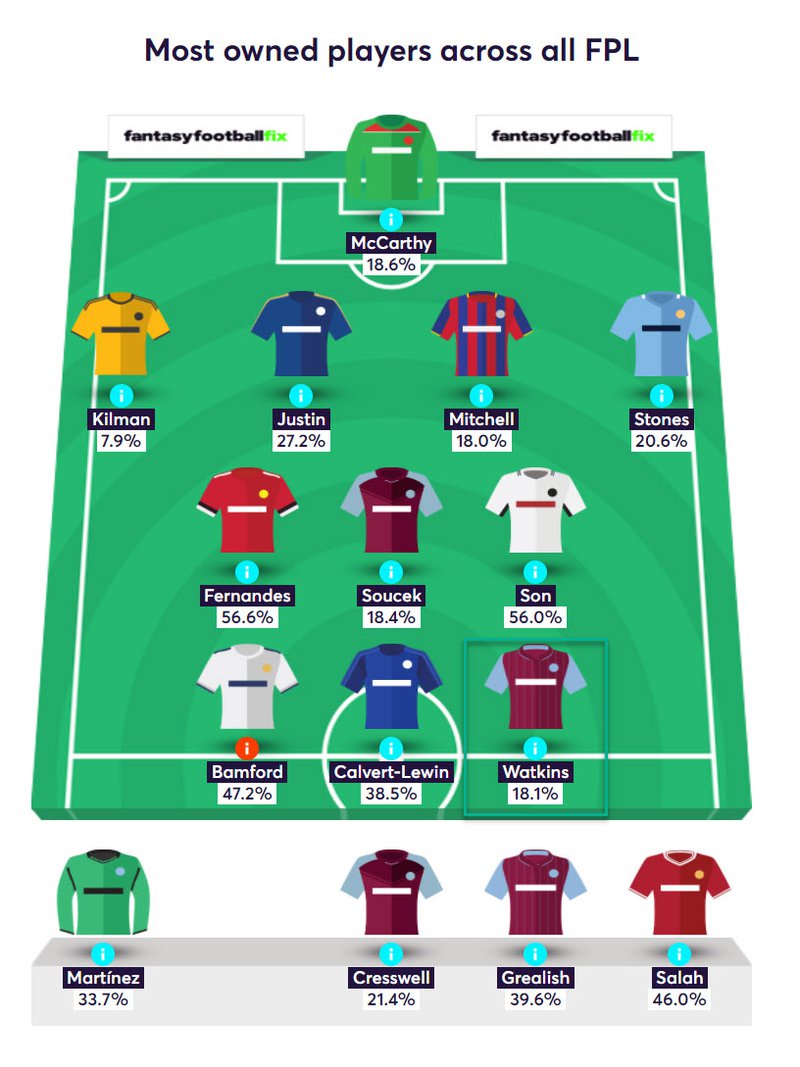 With three assists and three clean sheets in his last six matches (gameweeks 16 to 22), Cresswell has averaged 6.0 PPG. Only Robertson (52), Shaw (55) and Alexander-Arnold (64) have attempted more than his 33 crosses in that time amongst FPL defenders. He is also head and shoulders ahead of his other teammates, having completed the most final third passes (66). West Ham have conceded just six goals over the last six gameweeks, keeping two clean sheets. Only Liverpool and Man. City (each 18) have allowed opponents fewer SiB than the Hammers’ 22 while only Man. City (two) have allowed opponents fewer ‘big chances’ than their five. Fulham have scored four goals over the last six gameweeks and only Everton (three) and Southampton (two) have fared worse. The Cottagers are ranked 13th for both SoT (20) and ‘big chances’ (seven). Our Fix Algorithm currently projects a 40% probability of a West Ham clean sheet and a point score of 4.0 for the left-back.