Salah played a hand in the only goal against Spurs and has provided four goals and two assists over the last seven gameweeks, where he’s averaged 8.5 points per game (PPG). The Egypt international ranks top amongst midfielders for shots on target (SoT) (12) and shots inside the box (SiB) (21) over this period, while only Mané (six) has been afforded more than his five ‘big chances’. He’s also created four ‘big chances’, with only Norwood, Mahrez (each five) and De Bruyne (six) faring better. As the FPL Statistics feature shows, his ownership is still relatively low at around 25% across the different groups. Liverpool scored 13 goals over the aforementioned period and only Man. City (19) were more prolific. They also only trail the defending Champions for shots in the box (SiB) (81 to 76) and ‘big chances’ (21 to 19). Man. Utd have conceded seven goals in as many matches and the Red Devils are also seventh for shots conceded (75). They have faced the likes of Norwich, Burnley and Newcastle over this period and a visit to Anfield is likely to be a far sterner test. Our Fix Algorithm projects a point score of 6.6 for Salah. 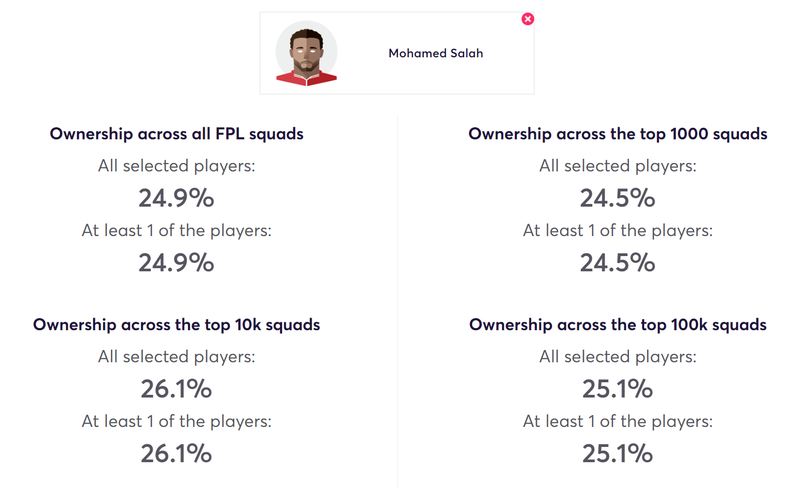 Vardy failed to record a shot against Southampton but provided a perfect cross to set up the Foxes’ opening goal. As the Fix Heatmaps feature shows, the 33-year-old has bagged nine goals and two assists in nine away matches this season and has averaged 8.2 PPG on the road. Only Sterling (17) has been afforded more than his 12 ‘big chances’ during away matches, while only Jesus (17) and Sterling (16) are able to better his 15 SoT. Leicester have scored eight goals over the last six gameweeks, only Southampton (nine), Liverpool (10), Watford, Man. Utd (both 11) and Man. City (18) have scored more. Man. Utd (40) and Man. City (44) are the only teams to have landed more SoT than the Foxes’ 30. Burnley have conceded eight goals over the same period and only six teams have shipped in more. They are eighth-worst for shots conceded (76) and fifth worst for ‘big chances’ conceded (12) with only West Ham (14), Leicester (16), Newcastle (17) and Villa (23) succumbing to more. Our Fix Algorithm projects a point score of 6.0 for Vardy.

Southampton sealed a late win over Leicester as Ings made it 10 goals from his last 11 appearances, averaging 7.1 PPG. He ranks top amongst forwards with a total of 20 SiB over the last six gameweeks, while only Jesus (12) and Rashford (13) can better his 11 SoT. The Man. City forward (nine) is the only player able to better his six ‘big chances’ in that time. As per our Price Predictor feature, he is likely to go up in price again this gameweek having already risen 0.1 earlier in the week. The Saints have scored nine goals over the last six gameweeks, only four teams have managed to score more. They are ranked fifth for SiB (50) and only Everton (51), Liverpool (59), Man. City (63) and Chelsea (64) have attempted more. They are also fifth for ‘big chances’ created (14) and only Man. Utd, Liverpool (both 15), Sheff. Utd. (18) and Man. City (19) have conceded more. Wolves have shipped nine goals over the same period and  Norwich, Bournemouth, Leicester, Newcastle (all 11) and Villa (15) are the only teams to have a poorer record. They are also eighth-worst for ‘big chances’ conceded (10). Our Fix Algorithm projects a point score of 5.0 for the Englishman.

Buendía has played a hand in three of the five goals Norwich have scored in the last six gameweeks, to average 4.5 PPG. As the Stats Sandbox shows, he ranks top amongst all players with a total of 28 attempted assists during that period, ahead of Willian (20), Grealish, Moutinho and De Bruyne (each 17). Only Norwood and De Bruyne (each five) have created more ‘big chances’ than his four. Although the Canaries have only scored five goals over the last six gameweeks, their underlying statistics are promising. They are ranked 11th for both shots (67) and ‘big chances’ (24) despite playing the likes of Man. Utd, Palace, Spurs, Wolves and Leicester over that period. Bournemouth are in a bit of a rut at the moment, only Villa (15) have conceded more goals than the Cherries’ 11 over the past six matches. Meanwhile, Leicester (59) and Villa (70) are the only teams to have allowed opponents more SiB than the Cherries’ 57. Our Fix Algorithm projects a point score of 4.2 for Buendia.

Liverpool kept their sixth consecutive clean sheet in gameweek 22, with a 1-0 win over Spurs. During the last four gameweeks, Alexander-Arnold ranks first amongst defenders for Fantasy Premier League (FPL) points (44) and joint-first for shots (six) and attempted assists (eight). No player, across all positions, has created more ‘big chances’ than his four, while only Salah (2.24) can better his 1.86 expected assists (xA). Liverpool have the best defensive statistics in the league over the last four matches. They have conceded zero goals and allowed opponents just eight SoT and two ‘big chances’. Although Man. Utd have scored 10 goals over the same period, it is worth mentioning that they are ranked 11th for SiB (28) so they have been a tad fortunate. Our Fix Algorithm projects a 50% chance of a Liverpool clean sheet and a point score of 5.6 for Alexander-Arnold.