Vardy is expected to return to the Leicester starting lineup after the missing the last two league games and no forward has scored more than his eight goals on home turf this season. His total of 13 shots on target (SoT) is bettered only by Pukki and Rashford (both 17) and he is ranked fifth for ‘big chances’ with only Jesus (10), Rashford, Wood and Abraham (all 13) registering more. The Foxes have scored 11 goals over the last six gameweeks, only Liverpool (12) and Man. City (13) have been more prolific. They landed 33 SoT with only Man. City (38) and Man. Utd (41) managing more. They are also ranked second for ‘big chances’ created (16) with only Liverpool (17) registering more. Southampton have improved defensively since they were beaten 9-0 in the reverse fixture earlier this season. Over the last six gameweeks, they have conceded five goals with only Watford (four) and Liverpool (zero) more frugal. However, it is worth mentioning that they are sixth worst for SoT conceded (26) with only Palace (27), Leicester (29), Bournemouth (30), Villa (31) and Newcastle (41) allowing more. Our Fix Algorithm projects a point score of 7.5 for Vardy.

De Bruyne has been in brilliant form of late with three goals scored in the last six gameweeks, only Martial and Salah (both four) have scored more amongst midfielders. His total of 20 shots and eight SoT is bettered only by Salah (23 and 12). Only Grealish, Willian (both 19) and Buendia (31) have created more chances than the Belgian’s 18. No midfielder has created more ‘big chances’ than his four. He is the most owned player in the top 1000 with 96.8% ownership as per our FPL Statistics feature. Over the last six gameweeks, the reigning Champions are top for goals (13), shots (99) and shots in the box (SiB) (67). Only Leicester (16) and Liverpool (17) fashioned more ‘big chances’ than their 15. Villa’s defensive statistics from the same period are appalling. No team conceded more goals (13) or allowed opponents more SiB (77). They are also bottom for ‘big chances’ conceded (23). Our Fix Algorithm projects a point score of 5.0 for the Belgian. 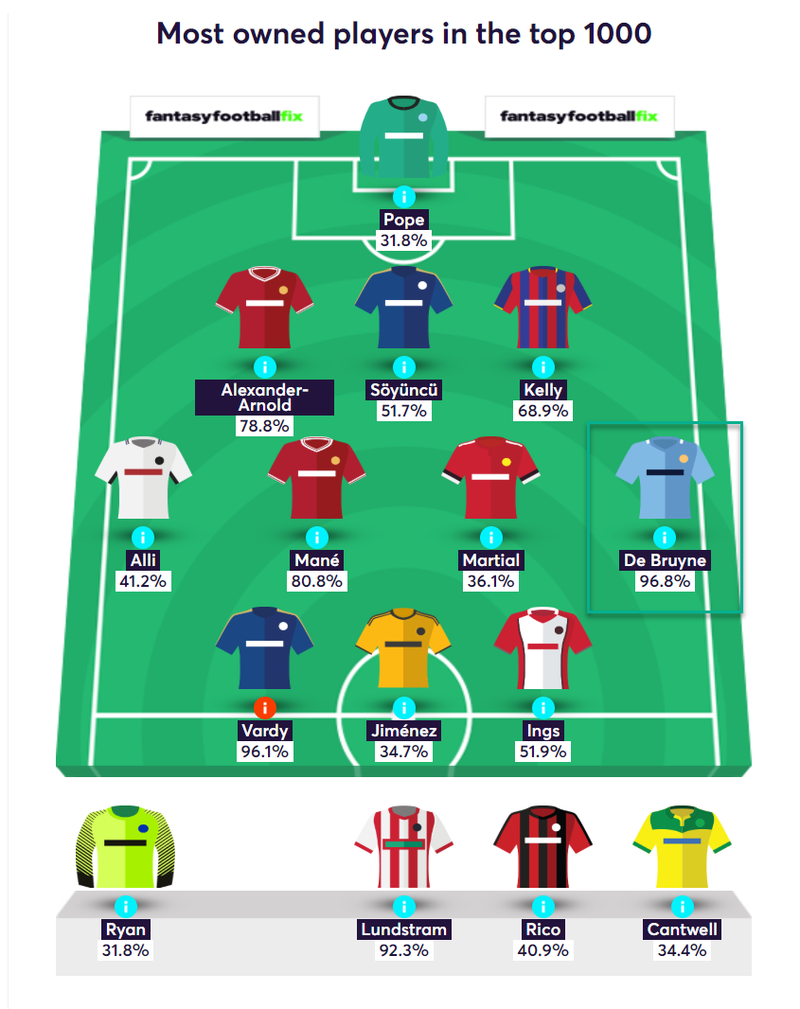 Martial should return to the starting lineup for the visit of Norwich after playing only 10 minutes against Man. City in their Carabao Cup tie midweek. No midfielder has scored more goals than the Frenchman’s four over the last six gameweeks and only De Bruyne (eight) and Salah (12) landed more SoT than his seven. He registered three ‘big chances’ with only Sarr, Sterling (both four), Mané and Salah (both five) faring better. He also created three ‘big chances’ with only Perez, Mahrez, De Bruyne and Buendia (all four) creating more. The interactive shot map for the Frenchman shows that his shots have been from good positions this season with an xG (expected goals) of 6.82. Man. Utd have scored nine goals over the last six gameweeks, only Spurs, Leicester (both 11), Liverpool (12) and Man. City (13) have scored more. No team landed more SoT than the Red Devils’ 41. Only Watford (13), Sheff. Utd (15), Man. City (15), Leicester (16) and Liverpool (17) fashioned more ‘big chances’ than their 12. Norwich have conceded nine goals over the same period, only six teams conceded more. Only Leicster (82), Everton (87), Bournemouth (88), Newcastle, Villa (both 103) allowed opponents more shots than the Canaries’ 79. Our Fix Algorithm projects a point score of 7.3 for Martial.