Vardy is set for a return to Premier League action against Southampton this weekend, after missing the 3-0 win over Newcastle due to a tight calf. The Leicester forward has eight goals and three assists in 10 home matches this season and has averaged 7.0 points per game (PPG) at the King Power Stadium, as you can see via our Fix Heatmaps feature. No forward has picked up more Fantasy Premier League (FPL) points (70) during home matches, while only Pukki and Rashford (each 17) have fired more than his 14 shots on target (SoT). Over the last six gameweeks only Liverpool (12) and Man. City (13) have scored more goals than the Foxes’ 11. Leicester have landed 33 SoT and only Man. City (38) and Man. Utd (41) have registered more. Liverpool (17) are the only team to have fashioned more ‘big chances’ than their 16. Southampton have improved defensively of late, conceding just five goals in the same period. Watford (four) and Liverpool (zero) are the only sides to have conceded fewer. However, they are sixth worst for SoT conceded (26) with only Palace (27), Leicester (29), Bournemouth (30), Villa (31) and Newcastle (41) faring worse. Our Fix Algorithm projects a point score of 7.5 for Vardy. 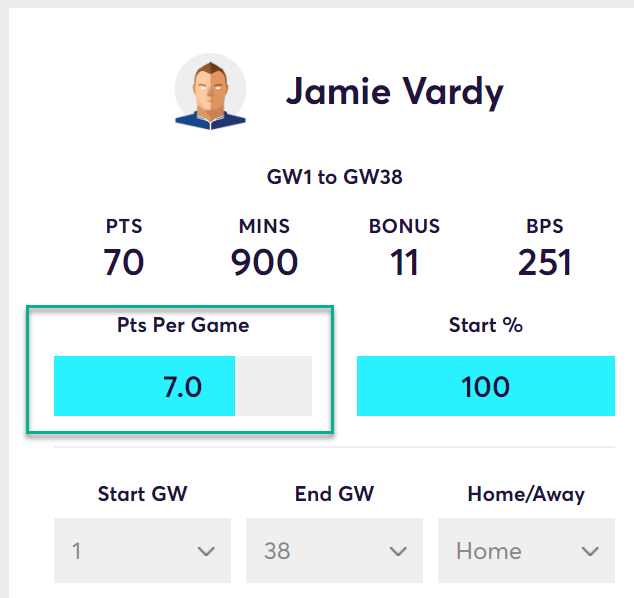 Martial has recovered from illness ahead of Norwich’s visit to Old Trafford this weekend and the Frenchman has been in fine form over the last six gameweeks. He’s netted four goals, ranking joint-first with Salah amongst midfielders and only trails the Egypt international for shots on target (12 to eight). The 24-year-old has been afforded three ‘big chances’, ranking joint-fifth amongst midfielders and his total of three ‘big chances’ created can only be bettered by Buendía, Mahrez (each four) and De Bruyne (five). He's rated as 100% to start as per our Predicted Lineups feature after his benching midweek in the League Cup. Man. Utd have scored nine goals in the last six gameweeks, only Spurs, Leicester (both 11), Liverpool (12) and Man. City (13) have scored more. No team have tested the opposition goalkeeper more frequently during that period, with the Red Devils landing 41 SoT. Norwich have conceded nine goals in the same timeframe, keeping no clean sheets. Only Leicester (82), Everton (87), Bournemouth (88), Newcastle and Villa (both 103) have allowed opponents more shots than the Canaries’ 79. Our Fix Algorithm projects a point score of 6.9 for Martial. 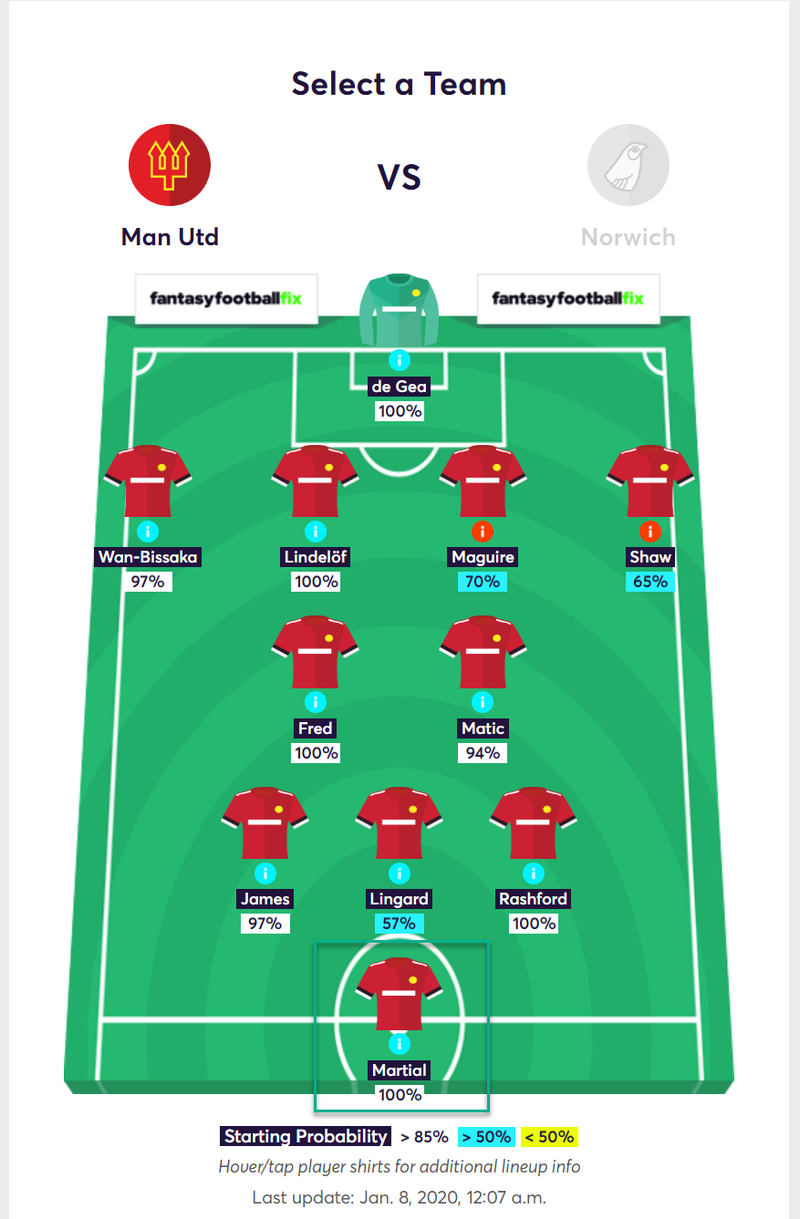 No player has returned more FPL points than De Bruyne (45) in the last six gameweeks, where he’s chipped in with three goals and four assists. As the Stats Sandbox shows, the Belgium international ranks first with a total of five ‘big chances’ created over that period, while only Buendía has attempted more assists (31 to 19).  Salah is the only midfielder to have taken more than his 20 goal attempts (23) or his eight shots on target (12). No team has scored more goals (13) or taken more shots than Man. City’s 99 over the last six gameweeks. Their total of 15 ‘big chances’ is bettered only by Leicester (16) and Liverpool (17). Villa have the worst defensive numbers in the league over the same period. No team has conceded more goals (13), shots (103) and ‘big chances’ (23) than the Villans. Our Fix Algorithm projects a point score of 5.8 for De Bruyne.

Jiménez has been directly involved in five goals over the last six gameweeks, averaging 5.2 PPG, with no forward recording more than his three assists. The Mexican ranks second only to Joelinton (four) with a tally of three ‘big chances’ created, while only Deulofeu (13) can better his 11 attempted assists. Calvert-Lewin (21) and Rashford (23) are the only forwards to have taken more than his 19 goal attempts. As our Transfer Stats feature shows, he is a popular Kane replacement this gameweek. Wolves have scored nine goals in the last six gameweeks and only Spurs, Leicester (both 11), Liverpool (12) and Man. City (13) have been more prolific. They are ranked third for shots (93) with only Man. Utd (98) and Man. City (99) attempting more. Newcastle have conceded 11 goals over the aforementioned period and only Villa (13) have been more porous. The Magpies are bottom of the table for both shots conceded (103) and SoT conceded (41). Our Fix Algorithm projects a point score of 5.3 for the Mexican.

Doherty has averaged 4.3 PPG  over the last four gameweeks, earning a goal and an assist in that time. No defender has taken more than his six shots in the box (SiB) and he leads the way with a total of four SoT. The Irishman has also recorded three ‘big chances’ during that period, which again, is more than what any other defender has managed. Wolves have conceded 10 goals over the last six gameweeks but they have had some tough fixtures, having had to play Spurs, Man. City and Liverpool. Wolves have only allowed 26 SoT and 11 ‘big chances’ over those six matches. Newcastle have struggled to score of late, only Burnley (three) and Bournemouth (two) have scored fewer goals over the last six games than the Magpies’ five. Spurs (37), Bournemouth (33) and Burnley (32) are the only sides to have taken fewer SiB than their 39. Our Fix Algorithm projects a 40% chance of a Wolves clean sheet and a point score of 5.2 for Doherty.