Salah will be looking to add to his goal tally of nine in gameweek 21 as Liverpool host Sheff. Utd. at Anfield. Only Martial (four) has scored more goals amongst midfielders than Salah’s three over the last six gameweeks and as the Stats Sandbox shows, only De Bruyne (22) has taken more shots than his 18. It’s the Belgian (10) once again who is the only one to topple him for shots on target (SoT) (eight). The Egyptian, however, leads the way for shots in the box (SiB) (15). Liverpool are currently leading the scoring charts over the last six gameweeks with 15 goals. They are top for ‘big chances’ (18) and only Wolves (60), Man. City (63) and Chelsea (66) have taken more SiB than the Reds’ 58. Sheff. Utd’s defensive numbers are impressive, no team has allowed fewer ‘big chances’ (four) over the aforementioned period and only Liverpool (eight) have conceded fewer SoT than their 16. While Watford (five), Palace (four) and Liverpool (two) are the only teams to have conceded fewer goals than the Blades’ six.  However, a trip to Anfield is likely to be their toughest test of the season and our Fix Algorithm projects a point score of 7.1 for Salah.

One of the few nailed on starters over the busy Christmas period with a 100% starting probability as per our Predicted Lineups feature. Kane has scored four goals in the last six gameweeks and only Ings, Calvert-Lewin and Rashford (all five) have been more prolific. His total of 18 shots is only bettered by Jiménez (19), Abraham (20), Calvert-Lewin (22) and Rashford (26). While only Maupay, Calvert-Lewin (both 10) and Rashford (13) have landed more SoT than his eight. Spurs have scored 12 goals over the last six gameweeks and only Liverpool and Man. City (both 15) have scored more. Their total of 30 SoT is can only be bettered by Wolves (32), Brighton (37), Man. City (39) and Man. Utd (44). Southampton have conceded six goals in as many gameweeks, keeping just one clean sheet. They are ranked 10th for shots conceded (67) and the same for SoT conceded (24). Our Fix Algorithm projects a point score of 5.6 for Kane. 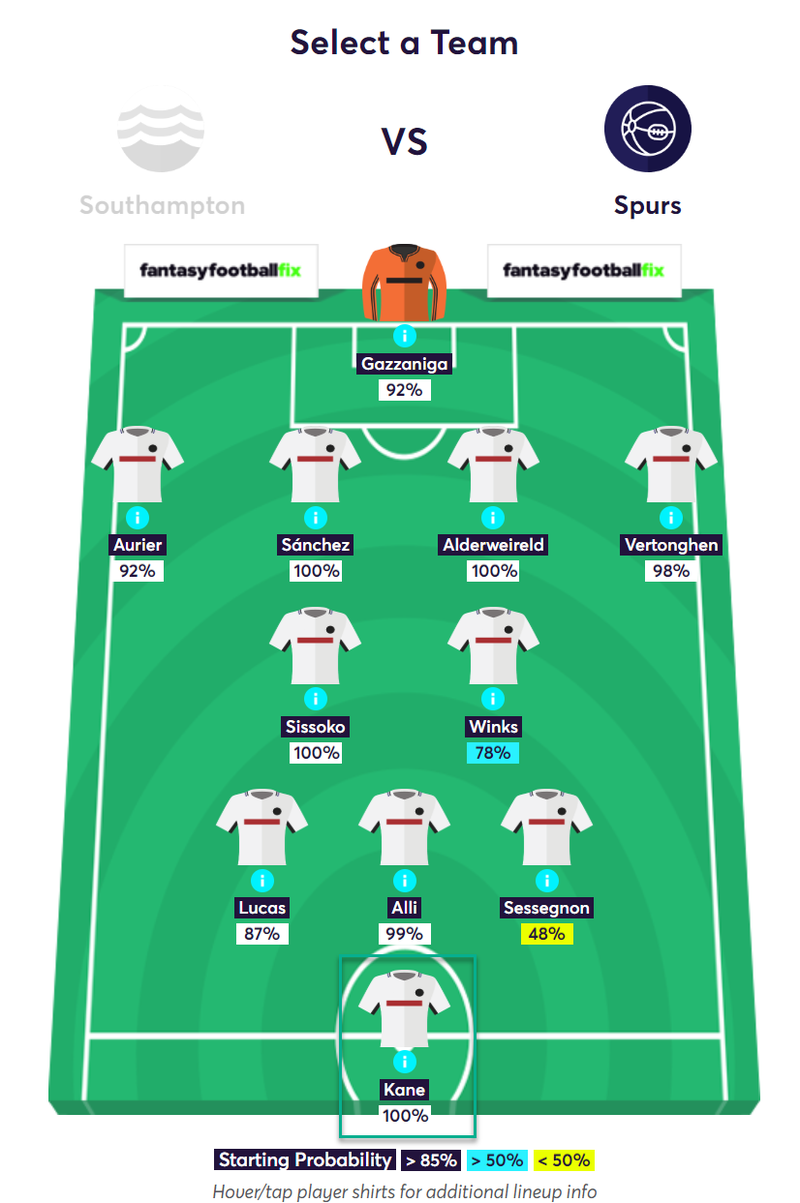 Jiménez should be nailed on to start after being benched against Liverpool in gameweek 20, the Mexican has notched two goals over the last six gameweeks. His total of 19 shots can only be beaten by Abraham (20), Calvert-Lewin (22) and Rashford (26) amongst forwards. He has landed seven SoT in the same period, with only Kane (eight), Maupay, Calvert-Lewin (both eight) and Rashford (10) registering more. He leads the way amongst forwards for attempted assists (13) and ‘big chances’ created (five). Wolves have great fixtures for the next three gameweeks as per our Fixture Analyzer and the Midlands club have scored 10 goals over the last six gameweeks, with only Man. Utd (11), Spurs (12), Liverpool and Man. City (both 15) finding the back of the net more frequently. Man. City (63) and Chelsea (66) are the only teams to have taken more SiB than Wolves’ 60. They are also ranked fourth for SoT (32) with only Brighton (37), Man. City (39) and Man. Utd (44) landing more. Watford seem to have found a bit of defensive resilience under Pearson, conceding just five goals in their last six matches. However, they are ranked 12th for SoT conceded (25) and 13th for ‘big chances’ conceded (10) which indicates they have been a bit fortunate. Our Fix Algorithm projects a point score of 4.7 for Jiménez.

Maddison should slot back into the starting lineup after being rested against West Ham last gameweek and as the Match Preview feature shows, he is the main creative engines or the Foxes. Over the last five matches, he has notched two assists and has created 14 chances with the next best being Iheanacho, coming in with just five. In fact, only Grealish, De Bruyne (both 16), Willian (18) and Buendia (26) have created more over the aforementioned period amongst midfielders. The Foxes have scored 10 goals over the last six gameweeks, and only Man. Utd (11), Spurs (12), Liverpool and Man. City (both 15) have managed more. No team have created more ‘big chances’ than Leicester’s 15. Newcastle on the other hand have conceded eight goals over the same period and only six teams were more leaky. Villa are the only team to have conceded more shots (108 to 99) and SiB (80 to 61) than the Magpies. Our Fix Algorithm projects a point score of 4.1 for Maddison. 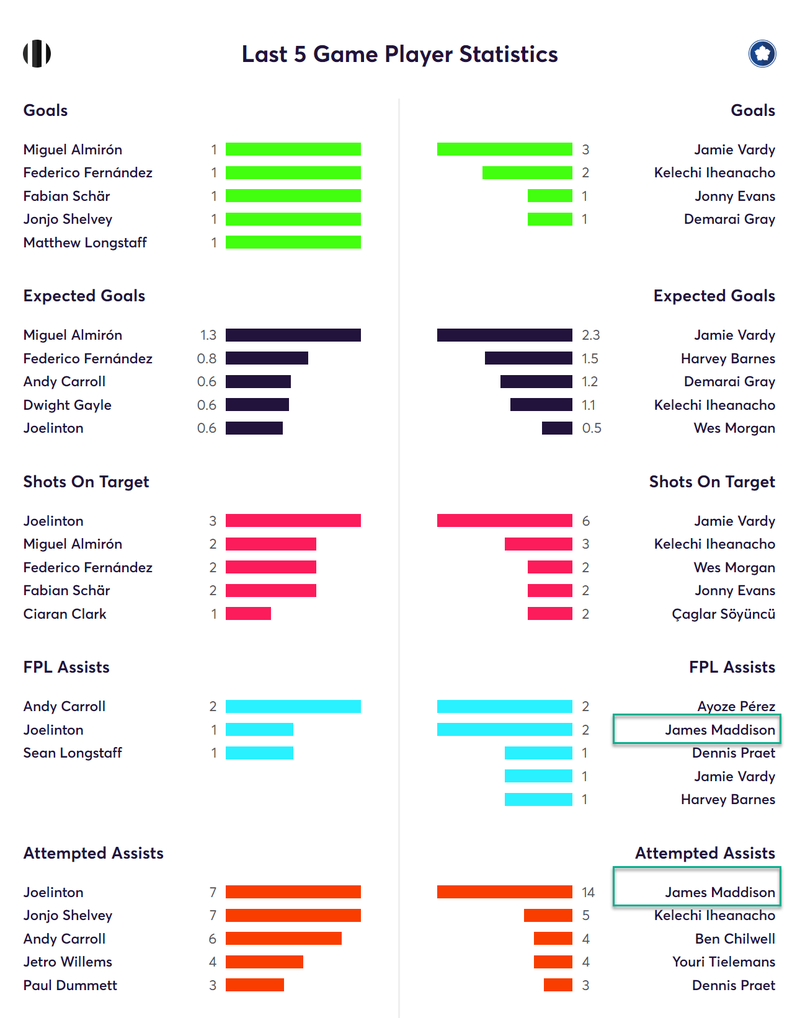 Alexander-Arnold has been in fine form of late with 32 Fantasy Premier League (FPL) points in his last two matches. Over the last six gameweeks, only Digne (10) has created more chances amongst defenders than his nine, but the Liverpool man leads the way for ‘big chances’ created with three. His total of six shots is only beaten by Byram (seven), Azpilicueta, Egan (both eight) and Saiss (10). Liverpool have the best defensive record in the league over the same period, conceding just two goals and keeping four clean sheets. No team have allowed opponents fewer shots (36) or SoT (eight). Only Sheff. Utd (four) have conceded fewer ‘big chances’ than their five. The Blades have scored six goals in as many gameweeks and only Palace (five), West Ham, Villa (both four), Burnley (three) and Bournemouth (two) have scored fewer. The Blades have only attempted 59 shots, while Arsenal (58), Palace (55), West Ham (52), Bournemouth (45) and Burnley (34) are the only teams to have attempted fewer. Our Fix Algorithm projects a 60% chance of a Liverpool clean sheet and a point score of 5.9 for Alexander-Arnold.