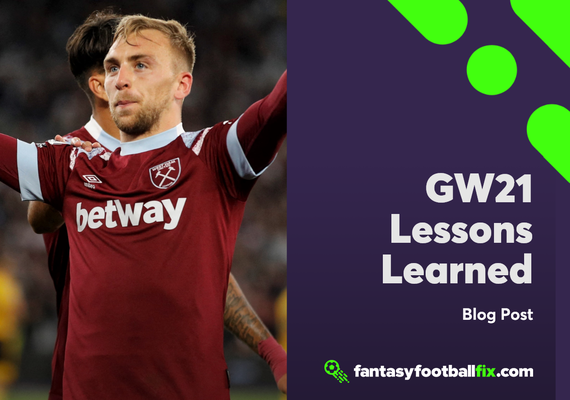 Bowen tops the Custom Stats xFPL table for gameweek 21 with a score of 14.4. The 26-year-old took four shots, all of which were in the box and was afforded two 'big chances'. Haaland scored from three of his four shots in the box (SiB) and was joint-top for 'big chances' (three) alongside Nketiah this weekend. Two two strikers registered xFPL scores of 11.3 and 11.0 respectively. Nketiah was also joint-top for SiB (six) alongside Gakpo but the latter registered an xFPL score of just 4.5 as none of these were classified as 'big chances'. No player created more chances than Trippier (eight) and two of these were 'big chances'. The right-back has now picked up bonus points in eight of his last appearances and registered an xFPL score of 10.4 last weekend.

Gameweek 22 does not kick off till the third of February but as the above image from our Transfer Analytics feature shows FPL managers are already moving for Man. United's double gameweek assets with Rashford, B. Fernandes and Shaw all seeing over 200,000 transfers each at the time of writing. Arsenal have a double the following week so it is no surprise to see Nketiah, Saka and Ødegaard also quite popular. Cancelo, Almiron and Martinelli who are all highly owned are being sold in droves with the trio seeing over 500,000 transfers out combined. 14.3% of all midfield transfers involve moving De Bruyne to B. Fernandes which is interesting considering the Belgian international has a double himself the following week. Almiron to Mitoma accounts for 8.6% of midfield transfers with managers losing patience with the Paraguayan after four consecutive blanks. Mitrović is the forward making way for Nketiah with that move accounting for 10.9% of all forward transfers.