Salah’s early substitution against Leicester should see the Egytpian start against Wolves despite the short turnaround. His price has already risen by 0.1 this gameweek and was predicted correctly as per our Price Predictor feature. Over the last six gameweeks, only Alli (four) has scored more goals amongst midfielders than Salah’s three. Even though he has played only four matches over this period, he is second for shots (18) trailing only De Bruyne (22). He is top for shots in the box (SiB) (16) and third for shots on target (SoT) (seven) with only Alli (nine) and De Bruyne (11) faring better. Liverpool have scored 16 goals over the last six gameweeks, the highest in the league. They are also top for ‘big chances’ with 18. Only Brighton (36), Man. City (41) and Man. Utd (46) have landed more SoT than their 33. Wolves have only conceded six goals during the same period but have one of the shortest turnarounds in the festive period, with this game coming less than 48 hours after their Man. City encounter. They have allowed opponents nine ‘big chances’ and 51 shots. Our Fix Algorithm projects a point score of 6.8 for Salah.

Kane looked determined to score against Brighton last gameweek and his goal took him to three over the last six gameweeks. Only Rashford (23) has attempted more shots than his 19 amongst forwards during this period. He has been showing his creative side as well, only Ayew (eight) and Jiménez (11) have created more chances than his seven. His ownership is still below 20% across all user groups as per our FPL Statistics feature, so he is almost a differential compared to other big hitters. Spurs have scored 13 goals over the last six gamweeks and only Liverpool (16) have scored more. The North London side are ranked seventh for SoT (28) and eighth for ‘big chances’ (11). Their opponents Norwich have conceded 10 goals over the same period and only Burnley (12) and Villa (13) have been weaker at the back. Just seven teams have conceded more SoT than Norwich's 25 and they are fourth-worst for SiB conceded (58), while only Bournemouth (59), Newcastle (60) and Villa (78) have fared worse. Our Fix Algorithm projects a point score of 6.0 for Kane. 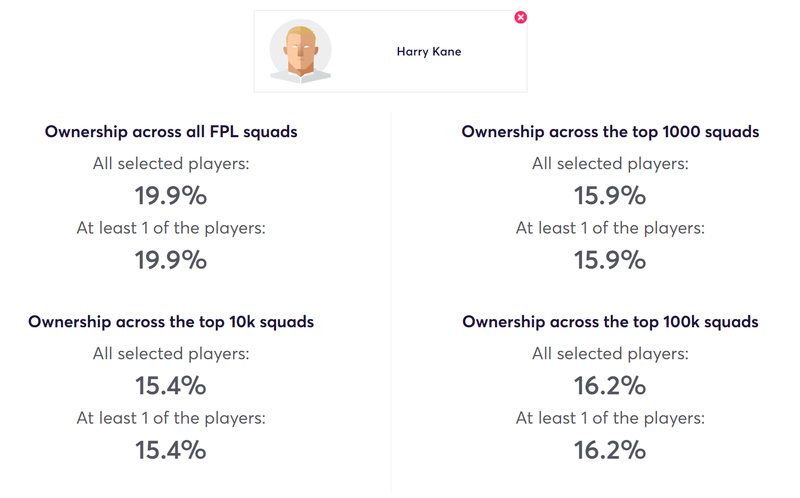 Martial’s brace against Newcastle took his total to three goals over the last six gameweeks, only Alli (four) has scored more amongst midfielders during that period (four). Pulisic, Mount (both 16), Salah (18) and De Bruyne (22) are the only midfielders to have taken more shots than the Frenchman’s 15 across the aforementioned period. As the Stats Sandbox shows, he has landed seven SoT and only Alli (nine) and De Bruyne (11) have fared better. His total of three ‘big chances’ created is bettered only by Son and De Bruyne (both four). Man. Utd have scored 11 goals in the last six gameweeks and only Spurs, Man. City (both 13) and Liverpool (16) have scored more. They are top for both shots (102) and SoT (46). Burnley have conceded 12 goals over the same period and only Villa (13) have been more porous. Just six teams have conceded more ‘big chances’ than their 11. Our Fix Algorithm projects a point score of 4.4 for Martial.

Ings should be one of the first names on the team sheet against Palace after he was rested for Saints’ last game against Chelsea and no forward has scored more goals than the Englishman’s five over the last six gameweeks. He has averaged 7.0 points per game over that period as shown in our Fix Heatmaps feature. Only Maupay, Vardy (both eight), Pukki (nine), Jesus (10) and Rashford (11) have landed more SoT than Ings’ seven amongst forwards. He has created six chances with only Kane (seven), Ayew (eight) and Jiménez (11) creating more. The Saints have scored 10 goals over the last six gameweeks, only Man. Utd (11), Spurs, Man. City (both 13) and Liverpool (16) have scored more. They are ranked sixth for shots (77) and seventh for ‘big chances’ (12). Although Palace have only conceded three goals over the same period, their total of 10 ‘big chances’ conceded indicates they have been a tad fortunate not to have conceded more goals. Our Fix Algorithm projects a point score of 4.6 for Ings. 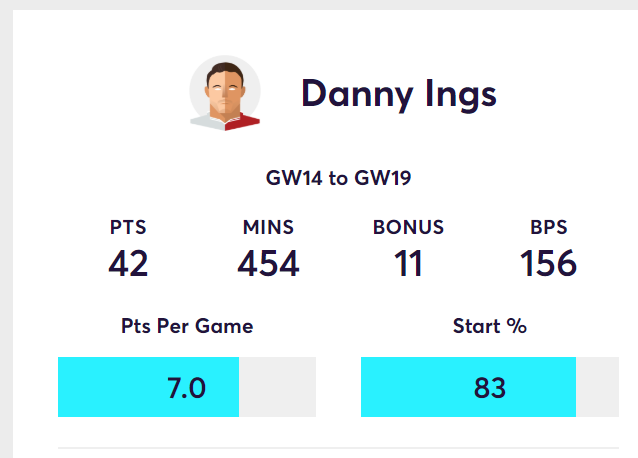 The top scoring defender in Fantasy Premier League, Alexander-Arnold's 24 points in gameweek 19 took his total to 98 for the season. His total of six shots over the last six gameweeks is only beaten by Webster, Egan, Byram (all seven) and Dunk (nine) amongst defenders. Only Digne (10) has created more chances than his nine. Liverpool have conceded just three goals over the last six gameweeks, the best in the league and no has team conceded fewer SoT than their 11. Their total of 38 shots conceded is bettered only by Man. City (32). Wolves have scored only eight goals over the same period and are ranked 10th for both shots (72) and SoT (25). Our Fix Algorithm projects a 50% chance of a Liverpool clean sheet and a point score of 5.1 for Alexander-Arnold.