Deeney tops the Custom Stats xFPL table this week with a score of 13.4, no player was afforded more ‘big chances’ (three) or landed more SoT (three) in gameweek 20. He also attempted three assists, one of which was a ‘big chance’. Calvert-Lewin’s numbers were impressive as well. The Toffees’ striker attempted five assists and four shots in the box (SiB), notching an xFPL score of 11.5. Willian was the week’s most creative player with seven attempted assists, registering an xFPL score of 6.8. Salah had a quiet game by his standards, he attempted only one SiB and landed just one SoT which explains his low xFPL score of 5.7.

Rashford and Martial were both on the scoresheet against Burnley with the pair scoring five goals between them over the last two gameweeks. Their statistics are compared for the last four gameweeks using the Fix Heatmaps feature. Although Martial has outscored Rashford for points 27 to 19, the latter has taken 17 shots to the Frenchman’s 11. He also beats him for SoT (eight to five) and expected goals (xG) (2.08 to 1.87). However, Martial has taken eight SiB compared to Rashford’s four which indicates he is shooting from better positions. The Frenchman is only 0.06 behind Rashford for average xG (0.56 to 0.50) but beats him for average expected assists (xA) (0.24 to 0.03). There is quite a significant price difference between the two, with Martial 1.2 cheaper, so if you have to get just one the Frenchman looks to offer similar potential for better value.

Ings and Abraham once again underlined the value in budget/mid-priced forwards this season by adding to their goal tally in gameweek 20. The popular options are put under the scanner using the Fix Comparison Matrix for the last four gameweeks. Jiménez's numbers are very impressive considering he has played the least minutes of the players under consideration and two of those fixtures were against Liverpool and Man. City. The Mexican leads the way for shots (15), SoT (five) and attempted assists (seven). Ings has been the most prolific with three goals and has good underlying numbers to boot, with 10 shots and five SoT. Pukki has been a bit unlucky, despite being afforded the most ‘big chances’ (three), he has only managed one goal. Abraham has landed just three SoT in four matches despite taking 13 shots and has attempted just one assist. Maupay’s numbers are poor compared to the others but he is also the cheapest of the lot and is has landed just one SoT fewer (four). 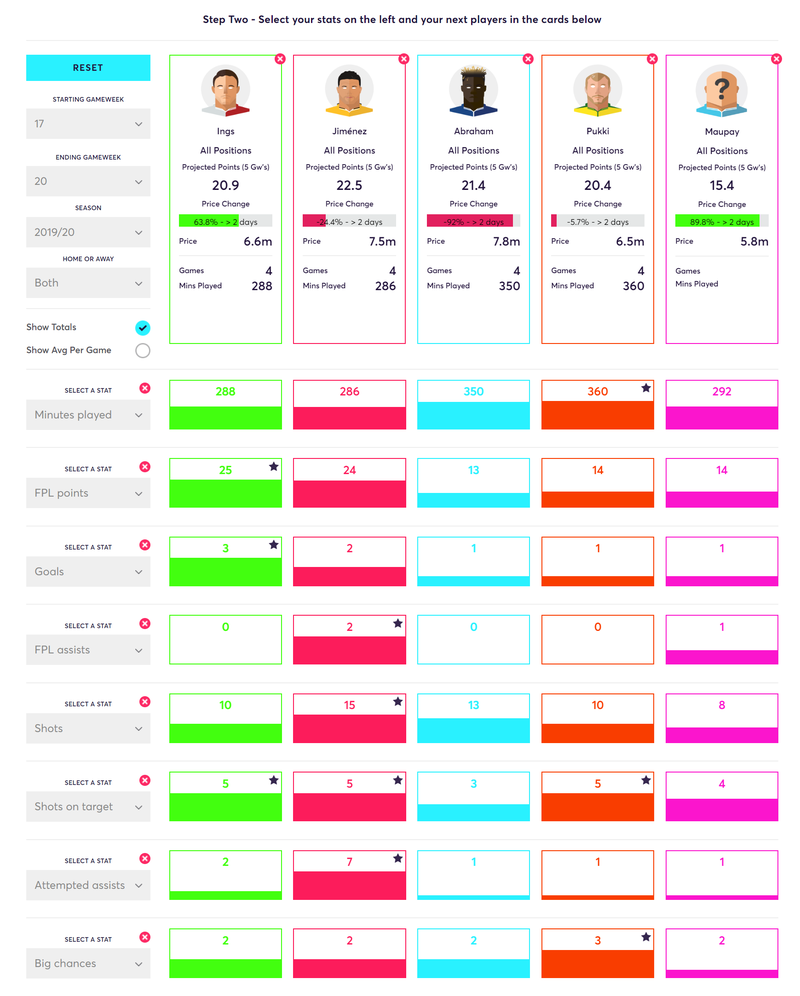