Aubameyang kicked off his season with a goal against Fulham and after signing a new contract he will be looking to celebrate in style against West Ham. Only Giroud (six), Kane and Ings (both seven) scored more goals than the Gabon international's five over the restart and no forward landed more shots on target (SoT) than his 15. Arsenal scored three goals on the opening weekend and only Liverpool (four) scored more. Their total of nine shots in the box (SiB) was only beaten by West Ham, Everton, Newcastle (all 10), Leicester (11) and Liverpool (17). West Ham conceded 62 goals last season, only Watford (64), Bournemouth (65), Villa (67) and Norwich (75) conceded more. No team allowed opponents more ‘big chances’ than the Hammers’ 102. Our Fix Algorithm projects a point score of 6.1 for Aubameyang.

B. Fernandes was prolific over the restart, scoring six goals with only Sterling (nine) scoring more amongst current Fantasy Premier League (FPL) midfielders. The Portuguese was also third for shots (25) with only Sterling (28) and Salah (34) shooting more often. He was ranked fifth for chances created (19), trailing only Grealish (22), Noble (24), Willian (25) and De Bruyne (40). The Portuguese is the most transferred in player this week as per our Transfer Stats feature. Man. Utd scored 22 goals over the restart and only Man. City (34) found the back of the net more often. Their total of 50 SoT was only beaten by Chelsea (51), Liverpool (55) and Man. City (72). Palace conceded 18 goals over the restart, only Watford (20) and Norwich (23) were more porous. They allowed opponents 21 ‘big chances’ with only Norwich (22), Arsenal (23), Sheff. Utd (24) and Watford (24) more obliging. Our Fix Algorithm projects a point score of 5.8 for the Portuguese. 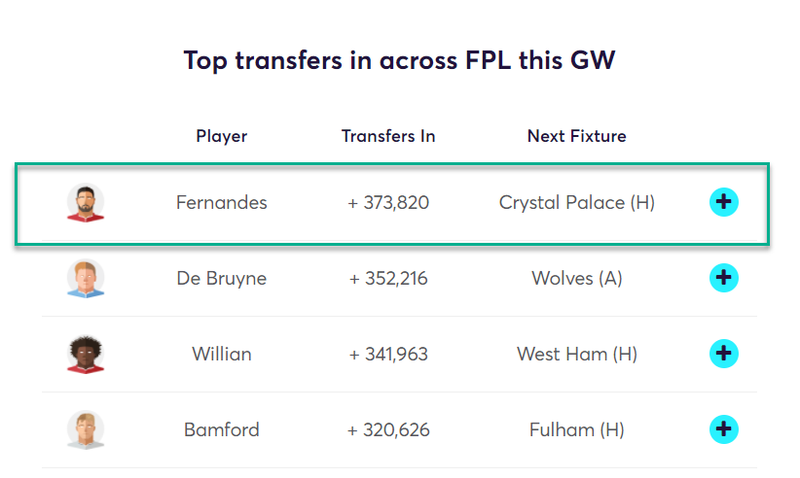 Richarlison was unlucky not to get on the scoresheet against Spurs in gameweek one, as the Stats Sandbox shows no forward took more shots (seven) or SiB (five) than the Brazilian. He was also top for ‘big chances’ (two). Only Leicester (11) and Liverpool (17) took more SiB than Everton’s 10 last gameweek. Their total of two ‘big chances’ was beaten only by Palace, Wolves, Arsenal, Liverpool (all three) and Leicester (four). West Brom conceded three goals on the opening weekend, only Leeds (four) shipped more. No team allowed opponents more ‘big chances’ than their four. Our Fix Algorithm projects a point score of 3.5 for Richarlison.