1. Agüero is the City attacker you must own

Man. City lined up with two strikers at the Etihad in a 3-5-2 shape, a departure from their traditional 4-3-3 formation last season, with Mendy and B. Silva playing wingback roles. After their record 106 goals last season, Fantasy Premier League (FPL) managers have been looking over City assets with great scrutiny, trying to find the most “nailed” route into their attack. This weekend has perhaps given us the clear answer – Agüero. With the likelihood of a consistent starting berth looking more promising as a result of this formation tweak Agüero has made himself a must have asset for your FPL squad. The Argentinian fired nine shots on goal, with four shots on target (SOT), had two big chances and created a chance, racking up a mammoth score of 20 points, with three goals and an assist. Guardiola was effervescent in his praise of the striker in his post-match interview, hailing his perfect physical condition after the World Cup and praising him as one of the best strikers in the world. Agüero is projected to be the highest scoring FPL asset for the next six weeks as per our Fix Algorithm with a score of 42.3, and if you do not already have him in your squad, you should get him in.

Continuing the trend of fullbacks hoovering up FPL points, the Chelsea left-back posted a haul of 13 points against Arsenal, with a goal and assist off the back of his attacking endeavors. There was a lot of speculation in pre-season that suggested Alonso would not be as attacking under new manager Sarri and instead would carry out a more traditional left-back role, but those fears can now be put to bed.  The Spaniard followed up his attacking performance in gameweek one with three shots, two chances created, and as our Fix heatmap feature shows spent more time in Arsenal’s half than his own. A word of caution though – Chelsea conceded five big chances in gameweek two, only one less than Huddersfield with six, indicating that they were fortunate not to be punished more severely. Alonso has racked up 24 FPL points already, more than any other defender, and at a cost of 6.6 looks to be a shrewd acquisition despite Chelsea’s defensive frailties 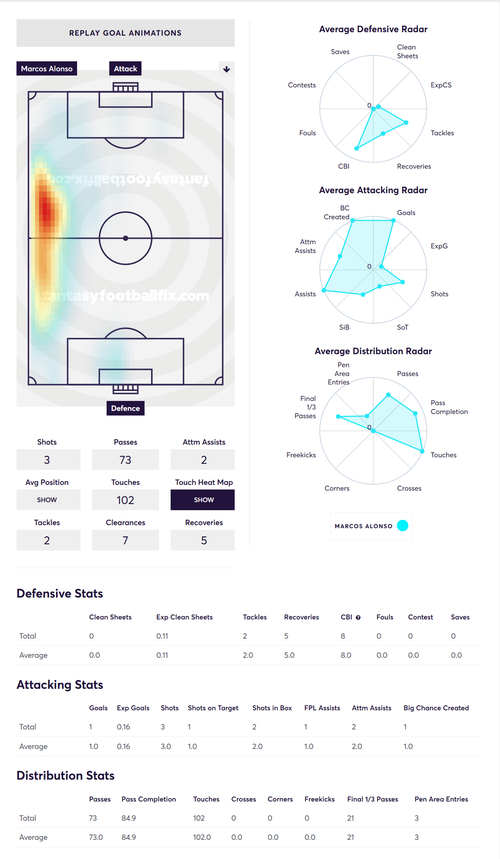 A number of budget forwards scored in gameweek two – Arnautovic, Deeney, Gray, Wilson, Ings, Mitrovic and Murray. A comparison using our Custom Stats table highlights the potential of Southampton’s latest recruit – Ings. The Saints forward had a busy afternoon at Goodison, with six shots in the box, two of which were big chances, two SOT and a chance created. The Englishman is also the cheapest of the aforementioned scorers coming in at only 5.5 in FPL. With a relatively kind schedule Southampton are expected to score 6.15 goals in the next six weeks as per our Fix Algorithm. It is pertinent to mention that Ings is ineligible to face his parent club Liverpool in GW6 as per the terms of his loan deal, so you would require bench cover if you do decide to bring him in.