Caveat: This blog was written prior to the news about Raheem Sterling’s fitness, as revealed by Pep Guardiola prior to Man. City’s F.A. Cup match vs. Birmingham City on 10/01/21.

De Bruyne has already found the back of the net three times this season, and only Grealish (nine) has notched more assists than the Belgian (eight). His total of 49 shots is only beaten by B. Fernandes (51) and Salah (54) amongst midfielders, while only B. Fernandes (52) and Grealish (55) have created more chances than his 45. No midfielder has created more ‘big chances’ (13). Man. City have scored 24 goals this season and only Villa (239), Leeds (259) and Liverpool (262) have taken more shots than their 234. It is Liverpool again, who are the only team to have created more ‘big chances’ than their 45, with 50 total. Brighton have conceded 28 goals this season and only Sheff. Utd, Palace (each 29), Leeds (33) and West Brom (39) have been more leaky at the back. The Seagulls have allowed opponents 28 ‘big chances’ and 55 shots on target (SoT) over those matches. Our Fix Algorithm currently predicts a point score of 7.5 for De Bruyne.

B. Fernandes’ total of 11 goals this season is bettered only by Son (12) and Salah (13) amongst midfielders, while only the Egyptian (54) has taken more shots than the Portuguese’s 51. As the Stats Sandbox shows, only Son (13) and Salah (14) have been afforded more ‘big chances’ than his 12, while only Grealish (nine) has registered more assists than his eight. Man. Utd have scored 33 goals this season and only Liverpool (37) have been more prolific than the Red Devils. Their total of 91 SoT is bettered only by Leeds (92) and Liverpool (98). Burnley have conceded 20 goals this season, keeping six clean sheets. Only Palace (227), Newcastle, Sheff. Utd (each 238), Leeds (252) and West Brom (276) have allowed opponents more shots than the Clarets’ 209. Our Fix Algorithm currently projects a point score of 6.2 for B. Fernandes.

Sterling has notched four goals this season and his total of five assists is beaten only by De Bruyne, B. Fernandes (both eight) and Grealish (nine) amongst midfielders. He is ranked seventh for ‘big chances’ (eight) and 10th for SoT (13). His ownership is under 5% across all Fantasy Premier League (FPL) squads as per our FPL Statistics feature which makes him a potentially explosive differential captain. Man. City have scored 14 goals at home this season and only Everton, Villa (each 15), Chelsea (19) and Liverpool (21) have scored more on their home turf. In fact, no side has created more ‘big chances’ (27) in home matches. Brighton have conceded 13 goals on the road, keeping just two clean sheets. Only Palace (14), West Brom (15), Wolves (16), Sheff. Utd (17) and Leeds (20) have fared worse. Meanwhile, Liverpool, Palace (each 21), Sheff. Utd (22) and Leeds (32) are the only teams to have allowed opponents more ‘big chances’ than the Seagulls (19) on the road. Our Fix Algorithm currently projects a point score of 6.3 for Sterling. 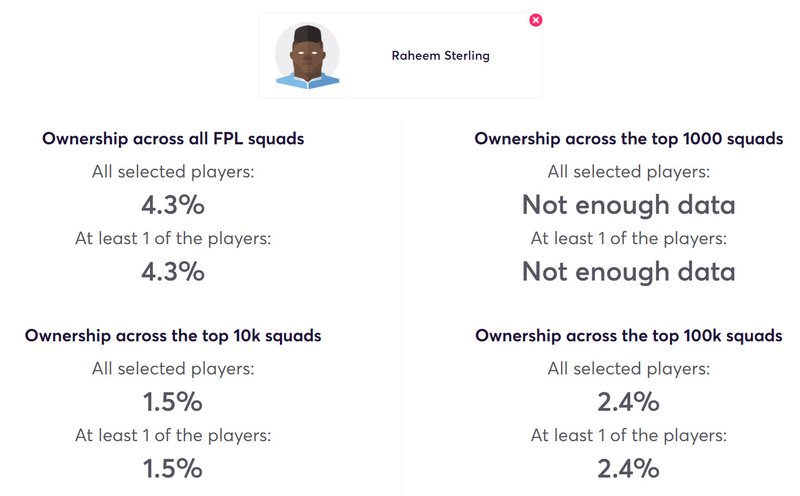