De Bruyne has amassed two goals and three assists across his last six league outings to average 7.0 points per game (PPG). No Fantasy Premier League (FPL) midfielder has been afforded more 'big chances' than his six over that period (gameweeks 11-17), while only Rashford (23) and El Ghazi (27) can better his 21 shots. The Belgian has created a league-high total of eight 'big chances.' He is the most transferred in player this week as per our Transfer Stats feature. Man. City have scored six goals over the last four gameweeks and only six teams managed more. Their total of 14 ‘big chances’ over this period can only be bettered by Man. Utd (18). Brighton have conceded seven goals over the last four gameweeks, only Leeds (nine), Palace (11) and West Brom (13) have shipped more. The Seagulls allowed opponents 14 shots on target (SoT) and six ‘big chances’ over those matches. Our Fix Algorithm currently projects a point score of 7.6 for De Bruyne. 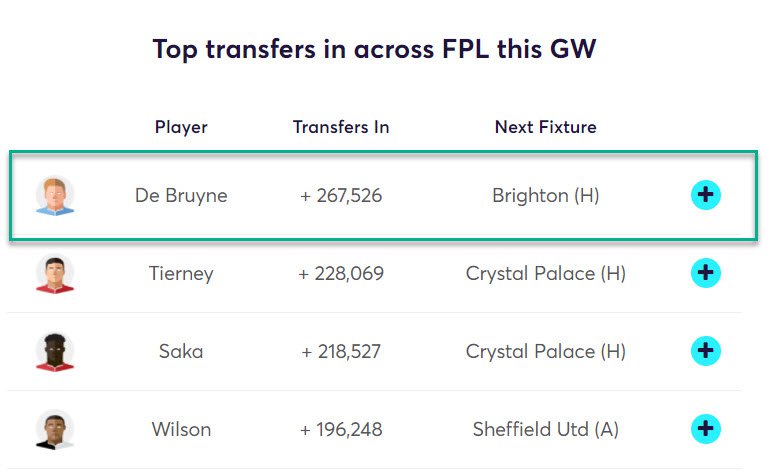 B. Fernandes has delivered in each of the last four gameweeks, amassing four goals, three assists and 45 FPL points, at an average of 11.3 PPG. No FPL midfielder has had more 'big chances' than his five, while only Mané (10) and El Ghazi (11) can better his nine shots in the box (SiB). Only Grealish (20) has carved out more than his 14 attempted assists. The Portugal international is the most owned player in the top 1000 with 93% ownership as per our FPL Statistics feature. Man. Utd have scored 11 goals over the last four gameweeks, more than any other side. The Red Devil’s are also top for shots (65), SoT (30) and ‘big chances’ (18). Burnley have conceded two goals over the last four gameweeks, allowing opponents 33 shots and five ‘big chances’. Our Fix Algorithm currently projects a point score of 6.7 for B. Fernandes. 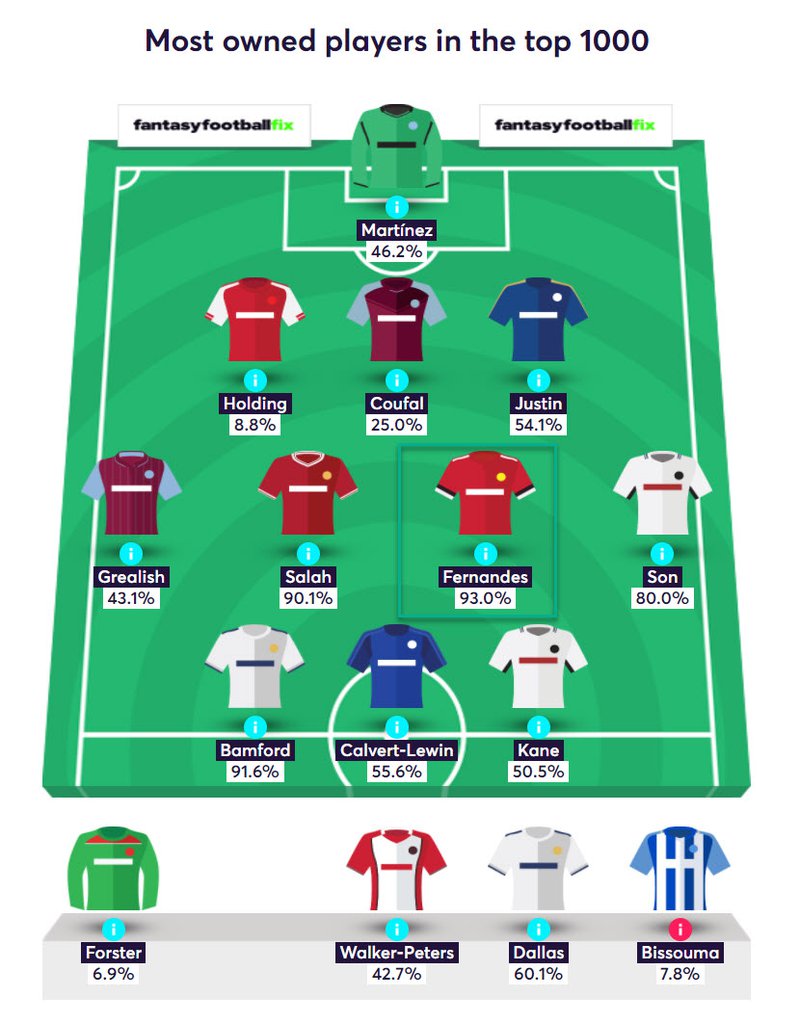 With a goal and an assist in his last four league outings, C. Wilson has averaged 4.5 PPG as per our Fix Heatmaps feature. The 28-year-old has been the Magpies’ talisman for Newcastle this season, with a direct goal involvement in 12 of their 18 goals (eight goals, four assists). Just five FPL forwards have registered more 'big chances' (12), while only Vardy and Bamford (each three) have won more penalties than his two. Newcastle have scored two goals over the last four gameweeks, registering 35 shots and 11 SoT over those matches. Meanwhile, Sheff. Utd have conceded five goals over the aforementioned period and are yet to keep a clean sheet this season. Only Man. Utd (38), Chelsea (39), Palace (41), West Brom (44) and Leeds (45) have allowed opponents more SiB over the last four gameweeks than the Blades’ 30. Our Fix Algorithm currently projects a point score of 4.4 for C. Wilson. 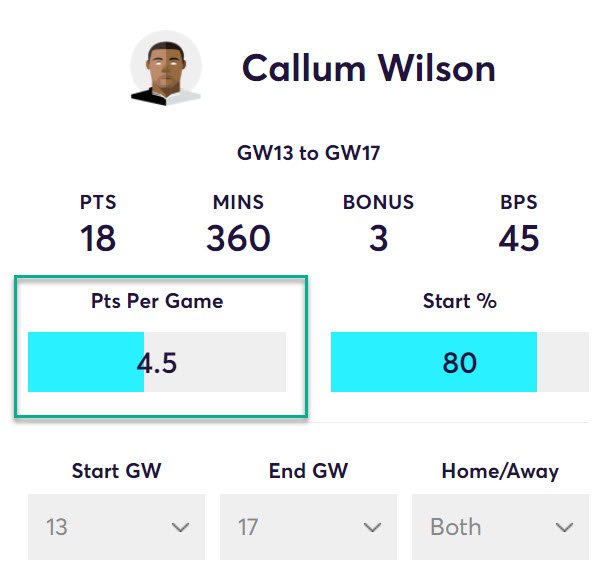 Lacazette has hit form over the last four gameweeks, where he ranks top amongst FPL forwards with four goals and 28 FPL points. As the Stats Sandbox shows, only Wood can equal his five 'big chances', while only Firmino, Vardy (each nine), Bamford (13) and Watkins (14) have fired more than his eight SiB. In fact, no player in his position has landed as many as his seven SoT. Arsenal have scored nine goals over the last four gameweeks and only Man. Utd (11) have been more prolific. The Gunners are top for shots in the box (SiB) while only Villa (26) and Man. Utd (30) have landed more SoT than their 23. Palace have conceded 11 goals over the same period, keeping just one clean sheet, and only West Brom (13) have been more porous. Meanwhile, Leeds (64) and West Brom (71) are the only teams to have allowed opponents more shots than the Eagles’ 58, and no side has conceded more ‘big chances’ (15). Our Fix Algorithm currently projects a point score of 2.8 for Lacazette - a conservative calculation as it adjusts to Arsenal’s turn in form.

With starts in each of Man City’s last six league matches, Cancelo has averaged 5.0 PPG. The Portuguese full-back ranks top amongst FPL defenders for touches in the opposition’s box (22) over that period (gameweeks 11-17) and is joint-first for 'big chances’ created (two).  Only Justin (1.15), Robertson and Tierney (each 1.56) can better his 1.11 expected assists (xA) figure. Man. City have conceded just one goal over the last four gameweeks, keeping two clean sheets. No team has conceded fewer SoT than their seven while only Fulham (one) have allowed opponents fewer ‘big chances’ than the Manchester side (two). Brighton have scored six goals over the last four gameweeks, creating just nine ‘big chances’ and they are only ranked 10th for SoT over this period (14). Our Fix Algorithm currently projects a 60% chance of a Man. City clean sheet and a point score of 4.6 for Cancelo.