B. Fernandes has found the back of the net 10 times this season, only Son (11) and Salah (13) have been more prolific amongst midfielders. His total of 20 shots on target (SoT) is bettered only by Salah (26) while his tally of 11 ‘big chances’ is beaten only by Son (12) and the Egyptian (13). No midfielder has notched more than his eight assists while only Grealish (51) has created more chances than his 47. Man. Utd have scored 31 goals this season, only Liverpool (37) have scored more. Only the Champions (48) have created more ‘big chances’ than the Red Devils (42) this season. Villa have conceded just 14 goals so far, only Man. City (12) have conceded fewer. However, the Villans are ranked just sixth for shots conceded (159) and eighth for SoT conceded (59). Our Fix Algorithm currently projects a point score of 7.6 for B. Fernandes.

Kane’s total of nine goals is bettered only by Bamford (10), Vardy and Calvert-Lewin (both 11) amongst forwards. As the Stats Sandbox shows, only Bamford (58) has taken more shots than his 55 while only Calvert-Lewin and Bamford (both 24) have landed more SoT than his 21. One of the most creative players in the league this season, Kane leads the way for assists (10) and no forward has attempted more assists (23) or created more ‘big chances’ (nine). Spurs are ranked seventh for goals scored (26) while only Man. City (39), Chelsea (40), Villa (41), Man. Utd (42) and Liverpool (48) have created more ‘big chances’ than their 36. Leeds have conceded 30 goals this season, only West Brom (35) have been more porous. No side have conceded more ‘big chances’ than Leeds (45). Our Fix Algorithm currently projects a point score of 6.9 for the Englishman.

Rashford notched his seventh goal of the season against Wolves and only Zaha (eight), B. Fernandes (10), Son (11) and Salah (13) have scored more amongst midfielders. His total of 18 SoT is bettered only by Bruno (20) and Salah (26) while only Son (12) and Salah (13) have registered more ‘big chances’ than his 11. He has averaged 6.5 points per game (ppg) over the last six gamweeks as per our Fix Heatmaps feature. Man. Utd have scored 10 goals in eight home matches this season and are ranked seventh for ‘big chances’ conceded (16) and shots (109). Villa have conceded just three goals on the road but are ranked just fifth for shots conceded (79). Our Fix Algorithm currently projects a point score of 5.5 for Rashford. 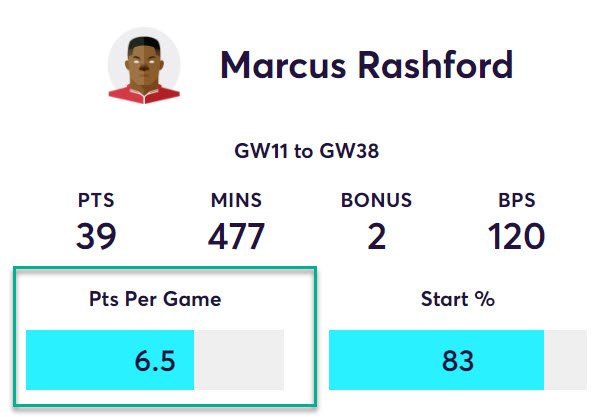