Toney tops the Custom Stats xFPL table for gameweek 16 with a mammoth score of 15.0. The 26-year-old was afforded five 'big chances', the most by any player in a single game this season and landed all six of his efforts on target. Darwin put forth his credentials for the second half of the season, the Uruguayan international took three shots in the box (SiB), all of which were 'big chances' and he also created two 'big chances' for his teammates leading to a 10.6 xFPL score. Robertson was the most creative player over the weekend with six attempted assists and notched a 5.7 xFPL score. Foden led the way for shots (seven) but registered an xFPL score of only 6.3 as none of these was a 'big chance'. Haaland registered just one shot and created three chances which meant his lowest xFPL score of the season, just 3.4. 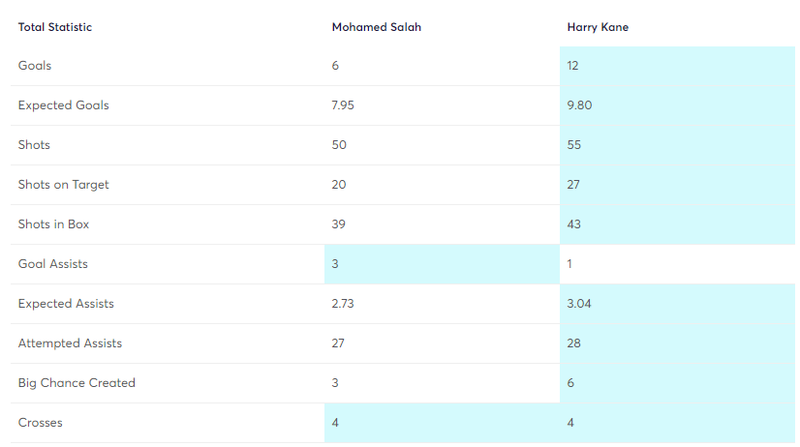 With Haaland a mainstay in FPL squads, managers will likely have to make a decision when the league resumes who their second premium asset will be from Salah and Kane. As the above image from our Heatmaps feature shows, the England international (12) has scored double the number of goals as Salah (six) and has scored 20 more FPL points. He has also beaten the Egyptian international for 'Expected Goals' (9.80 to 7.95), shots (55 to 50), SiB (43 to 39) and attempted assists (28 to 27) at a lower price. With Darwin also a possible cheaper option to tap into the Liverpool attack, Salah's spot in FPL squads post Christmas looks far from guaranteed.

Brentford, Villa and Forest all signed off with wins before the break and the three sides have the best schedule when the league resumes as per our Fixture Planner. Chelsea and Southampton will hope to recover and recuperate over the break and take advantage of a favourable schedule.

The above image sorted by 'Expected Goals' from our Stats Sandbox feature shows that Man. City, Arsenal and Liverpool are the attacks to invest in on the other side of the break but Newcastle, Brentford, Brighton, Fulham and Leeds should also be at the forefront of FPL managers minds for budget picks.