Vardy took his total to 13 goals for the season with his goal against Everton in gameweek 14 and headlines this week’s picks as the Foxes host Watford at the King Power stadium. Over the last six gameweeks, Vardy has scored eight goals, at least four more than any other forward. His 22 shots is beaten only by Jiménez (27) amongst forwards and he leads the way for both shots on target (SoT) (14) and ‘big chances’ (12). As the FPL Statistics feature shows, he is the highest owned player in the top 1000 with 98.6% ownership. Leicester have scored 19 goals over the last six matches, the highest in the league. They are also top for SoT (45) and only Man. City beat them for shots (130 to 112) and ‘big chances (24 to 22). Watford are without a manager at the time of writing and have conceded eight goals in the last six matches. They have conceded 32 SoT over that period with only 10 teams faring worse and the Hornets are also ninth-bottom for ‘big chances’ conceded (13). Our Fix Algorithm projects a point score of 6.9 for Vardy. 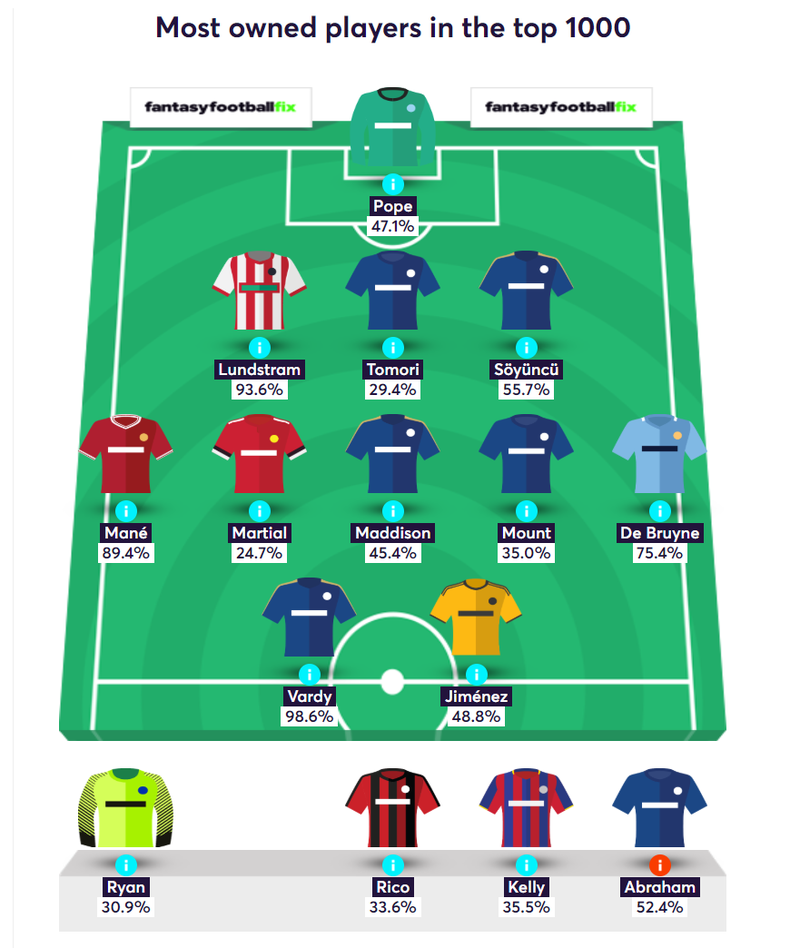 Salah looks to be fully over his ankle problem after back-to-back starts against Napoli in the Champions League and against Brighton in gameweek 14. The Egyptian has scored two goals in Liverpool’s last four home matches and leads the way for shots (17) and SoT (nine) amongst midfielders over that period. He registered three ‘big chances’ with only Alli, D. Silva (both four), Mané (five) and Pulisic (six) faring better. Liverpool have scored 12 goals in their last six matches, and only Leicester (19) have been more prolific. The Reds are ranked fourth for shots with 95, and only Chelsea (101), Leicester (112) and Man. City (130) have managed more. Their total of 39 SoT is beaten only by Leicester (45). Their opponents Everton have conceded nine goals in the last six gameweeks, keeping just one clean sheet. The Toffees have conceded 11 ‘big chances’ and 24 SoT in those matches. You can check the impact of a Salah goal to your overall rank by using our Fix Projected rank feature and our Fix Algorithm projects a point score of 6.7 for Salah. 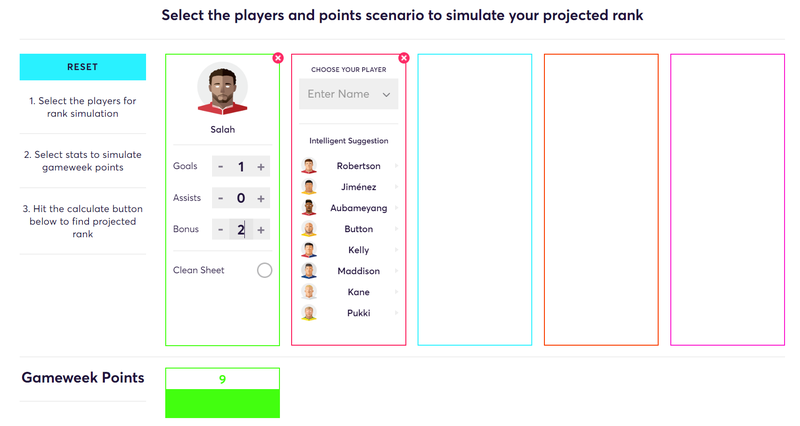 Jimenéz is rediscovering the form that saw him become a mainstay in Fantasy Premier League (FPL) squads over the 2018/19 season with four goals in his last six matches. Only Vardy (eight) has managed more amongst forwards in that period. As the Stats Sandbox graph shows, he leads the way for shots (27) and only Vardy (14) beats his amount of SoT (11). He is also top for chances created amongst forwards with 11. Wolves have scored eight goals in the last six matches, and only eight teams managed more. Their total of 89 shots was beaten only by Man. Utd (91), Liverpool (95), Chelsea (101), Leicester (112) and Man. City (130). They are also ranked eighth for SoT with 29. West Ham kept a clean sheet against Chelsea in gameweek 14 but the Hammers had conceded 12 goals in the five matches prior to that. Over the last six gameweeks, no team has conceded more ‘big chances’ than the Hammers’ 23 or allowed opponents more SoT than their 46. Our Fix Algorithm projects a point score of 5.4 for Jimenez. 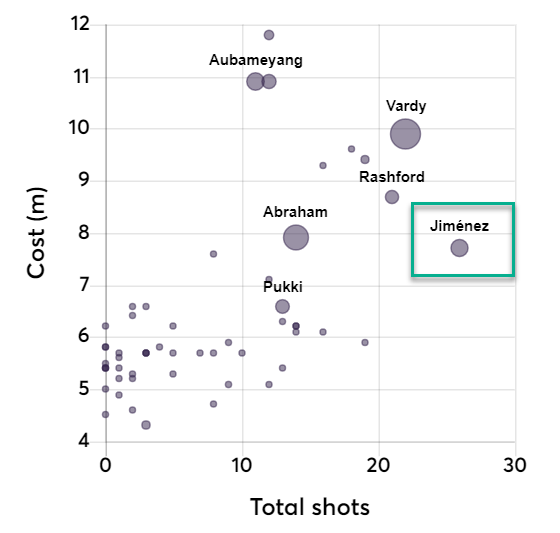 Zaha notched his first goal of the season against Liverpool in gameweek 13 and also scored against Burnley in gameweek 14, as he finally looks to be hitting form after a poor start to the season. No midfielder scored more than his two goals over the last two gameweeks and only Peréz (seven) and Grealish (eight) managed more shots in the box (SiB) than his six. This is even more impressive considering that both Burnley and Liverpool are defensively resolute sides. Palace are top of the Fix Fixture Analyzer for the next six gameweeks and Zaha is a great long term replacement for Mount as he should play every game over the busy festive period. Palace have scored only five goals over the last six gameweeks but three have come in the last two. They have registered 18 SoT and seven ‘big chances’ over these matches. Bournemouth have conceded seven goals over the last six matches, allowing opponents 29 SoT and 12 ‘big chances’. Our Fix Algorithm projects a point score of 3.4 for Zaha.

Liverpool’s marauding right-back notched two assists in gameweek 14, taking his total to six for the season. No defender has managed more than his three assists over the last six gameweeks and only Digne (22) beats him for chances created (20). He is also fourth for shots (seven) amongst defenders over that period with only Willems (eight), Doherty (nine) and Lundstram (15) managing more. Liverpool have conceded just six goals over the last six matches and only Leicester (two) have conceded fewer. The Reds have conceded just 10 ‘big chances’ and only Spurs, Burnley, Wolves, Man. City and Leicester (all seven) restricted opponents to fewer. Everton have only scored eight goals in the last six gameweeks. The Toffees are currently ranked sixth for both shots (89) and SoT (34) but are way down in 11th for ‘big chances’ with 12. Our Fix Algorithm projects a 60% chance of a Liverpool clean sheet and a point score of 5.7 for Alexander-Arnold.