Aubameyang was unable to extend his total of eight goals when the Gunners traveled to Leicester last gameweek, seeing a goal correctly ruled offside during the 2-0 defeat. As the Fix Heatmaps feature shows, the Arsenal forward has netted four goals in six home matches this season, averaging 5.3 points per game (PPG) at the Emirates. He was afforded five of his team’s 10 'big chances' during those games and fired eight shots on target (SoT) to rank joint-fifth amongst forwards, only trailing Rashford, Vardy (each nine), Abraham (10) and Pukki (11).  Arsenal have scored 16 goals this season, and only seven teams have scored more. They are sixth for shots in the box (SiB) with 95 and eighth for SoT with 53. Their opponents Southampton have conceded 29 goals, more than any team in the league. They are also ranked third-worst for ‘big chances’ conceded with 36, only Norwich (38) and West Ham (39) have conceded more. Our Fix Algorithm projects a point score of 6.9 for the Gabonese.

Man. City’s 3-1 defeat at Anfield last gameweek saw Sterling miss a 'big chance', while no player fired more shots (four) or exceeded his 0.40 xG (expected goals) during the match. Still owned by 42% of the top 1000 as per our FPL Statistics feature, the Englishman has chipped in with two goals and one assist in the last six gameweeks, with no teammate directly contributing to more goals (three) during that period, while only Jesus (six) could better his five 'big chances' amongst Man. City players. He fired a league-best total of 18 shots inside the box (SiB) across that spell, while only De Bruyne (15), Digne, Willian (each 18) and Alexander-Arnold (19) produced more than his 14 attempted assists.  Man. City are top for goals (35), shots (258), SoT (85) and ‘big chances’ (56) despite lying at fourth in the Premier League. Chelsea have conceded 12 goals in their six away matches and are yet to keep a clean sheet on their travels. Only Watford, Villa (both 13) and Newcastle (14) have conceded more goals on the road than the Blues. They are also ranked 11th for ‘big chances’ conceded in away matches with 13. Our Fix Algorithm projects a point score of 5.7 for Sterling. 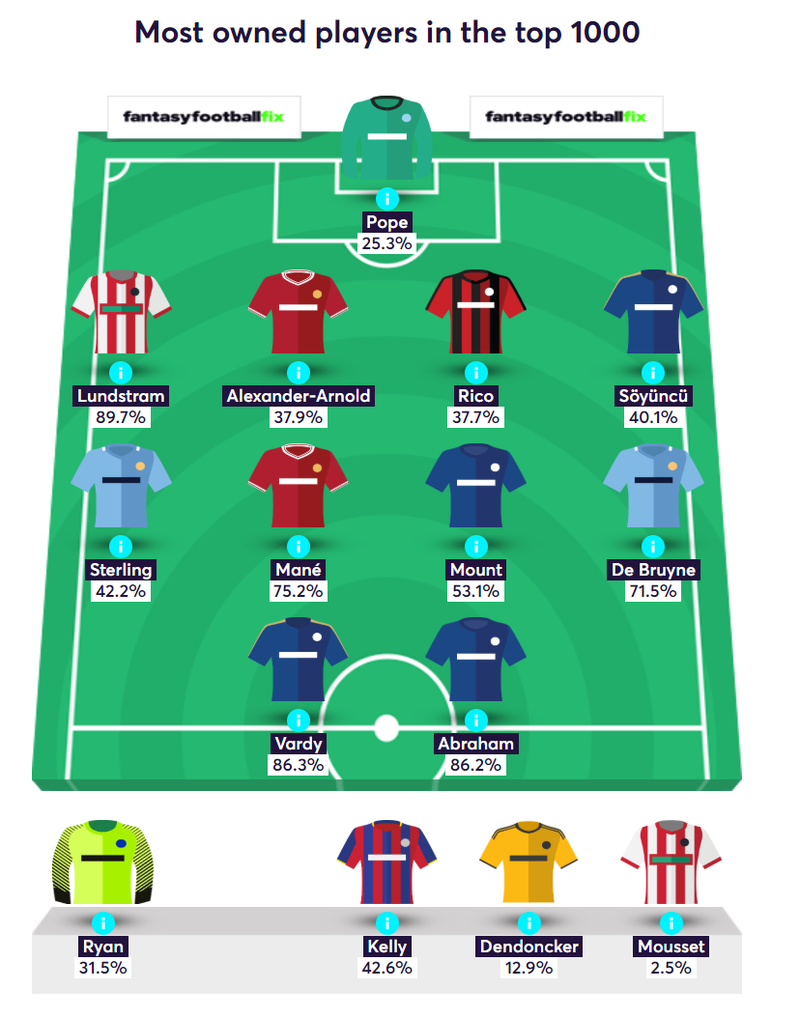 A late goal from Richarlison gave Everton all three points against Southampton last gameweek, as the Brazilian found his sixth goal involvement of the season (three goals, three assists). The 22-year-old has provided one goal and two assists over the last four gameweeks, to return an average of 5.8 points per game. As the Stats Sandbox feature shows, only four midfielders (Son, Salah, Sterling and Pulisic) fired more than his eight SiB during that period, while only Pulisic (32) and Sterling (72) took more than his 30 touches in the opposition’s box. Although Everton have only scored 13 goals this season, they are ranked sixth both for shots (162) and ‘big chances’ (27) indicating they have been a bit unlucky. Norwich have conceded 28 goals thus far, only Southampton (29) have conceded more. No team allowed opponents more SoT than their 75 and only West Ham (39) conceded more ‘big chances’ than their 38. Our Fix Algorithm projects a point score of 5.3 for Richarlison.

Gameweek 12 saw Wood return from injury to net his fifth goal of the season, as Burnley earned a 3-0 win over West Ham. The 27-year-old was in fine form in the weeks prior to injury, ranking top amongst forwards with a total of four goals scored in four appearances between gameweeks six and nine. As the Stats Sandbox feature shows, only Abraham (nine) fired more than his seven SoT during that spell, while no player was afforded as many as his eight 'big chances'.  Burnley have scored 17 goals this season, only Spurs (18), Chelsea (27), Liverpool (28), Leicester (29) and Man. City (35) have scored more. They are ranked ninth for SiB (92) and tenth for ‘big chances’ (24) and are a much more attacking outfit compared to previous seasons. Their opponents Watford have conceded 23 goals, while only Norwich (28) and Southampton (29) have fared worse. They are also sixth-worst for SoT conceded (62) and ‘big chances’ conceded (28). Our Fix Algorithm projects a point score of 3.7 for Wood.

Digne was unable to add to his tally of three goals and three assists during the 2-1 win over Southampton before the international break but no player produced more than his four attempted assists in gameweek 12. The left-back has averaged 5.0 PPG at home this season, with all three of his assists coming at Goodison Park. No defender has taken more corners (29) during home matches, while only Alexander-Arnold (30) has amassed more attempted assists than the Frenchman’s 14. Everton have conceded only eight goals in their six home games this season, keeping two clean sheets. They have allowed opponents only 50 shots at Goodison Park, while only Chelsea (42) and Man. City (35) have allowed fewer in home matches. Norwich have scored 11 goals this season, only Palace (10) and Watford (eight) have scored fewer. They have registered just 15 ‘big chances’, the lowest after Palace (13) and are third-worst for SoT with 43. Our Fix Algorithm projects a 50% chance of an Everton clean sheet and a point score of 5.6 for Digne.