After his late goal at Palace last weekend, Vardy has scored in each of the last three gameweeks now and no player has as many as his 10 goals this season. The 32-year-old has an impressive record against the Gunners, netting eight goals in eight league starts against the side, including five in his last four outings. As the Stats Sandbox graph shows, he’s been afforded six ‘big chances’ in the last five gameweeks; trailing only Mané (seven) and Abraham (eight), while only Salah and Abraham (each 10) have fired more than Vardy’s nine shots on target (SoT). No team has scored more goals than Leicester’s 21 over the past six gameweeks and only Liverpool (38), Villa (39), Chelsea (44) and Man. City (45) have landed more SoT than their 36. Arsenal have conceded seven goals in the last six gameweeks keeping just one clean sheet. They allowed opponents 29 SoT with only eight teams faring worse. Our Fix Algorithm projects a point score of 5.7 for Vardy. 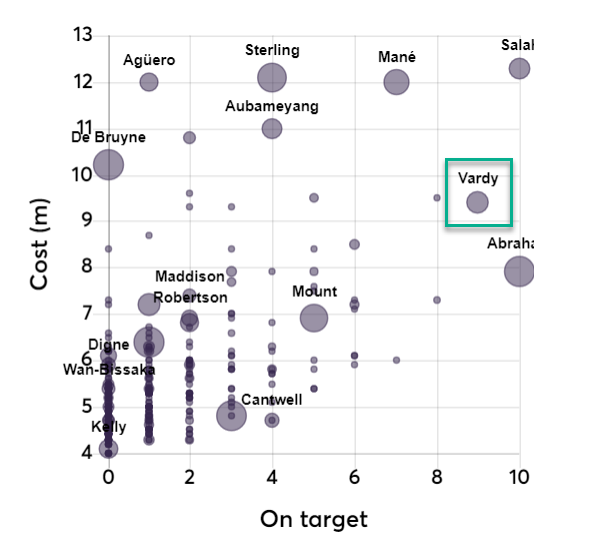 Chelsea’s win over Watford saw Abraham find his ninth goal of the season, with Vardy (10) the only player able to better that total. Only two of those goals have come at Stamford Bridge, compared to seven on the road, but the 22-year-old has actually displayed better underlying numbers during home matches. The most owned player in FPL as per the FPL Statistics feature, he’s been afforded 10 ‘big chances’ in five games at home, compared to just four ‘big chances’ in six away matches and has averaged more shots, in total (3.6 to 2.8), on target (1.8 to 1.7) and from inside the box (3.4 to 2.2) during home matches. Chelsea have scored 14 goals in the last six gameweeks, with only Man. City (18) and Leicester (21) scoring more. They have created 20 ‘big chances’ in that time with only Man. City (32) faring better. Palace have conceded eight goals in the same period, keeping just one clean sheet. They allowed opponents 60 SiB with only Newcastle (62), Norwich (65) and Villa (88) faring worse. Our Fix Algorithm projects a point score of 5.5 for Abraham. 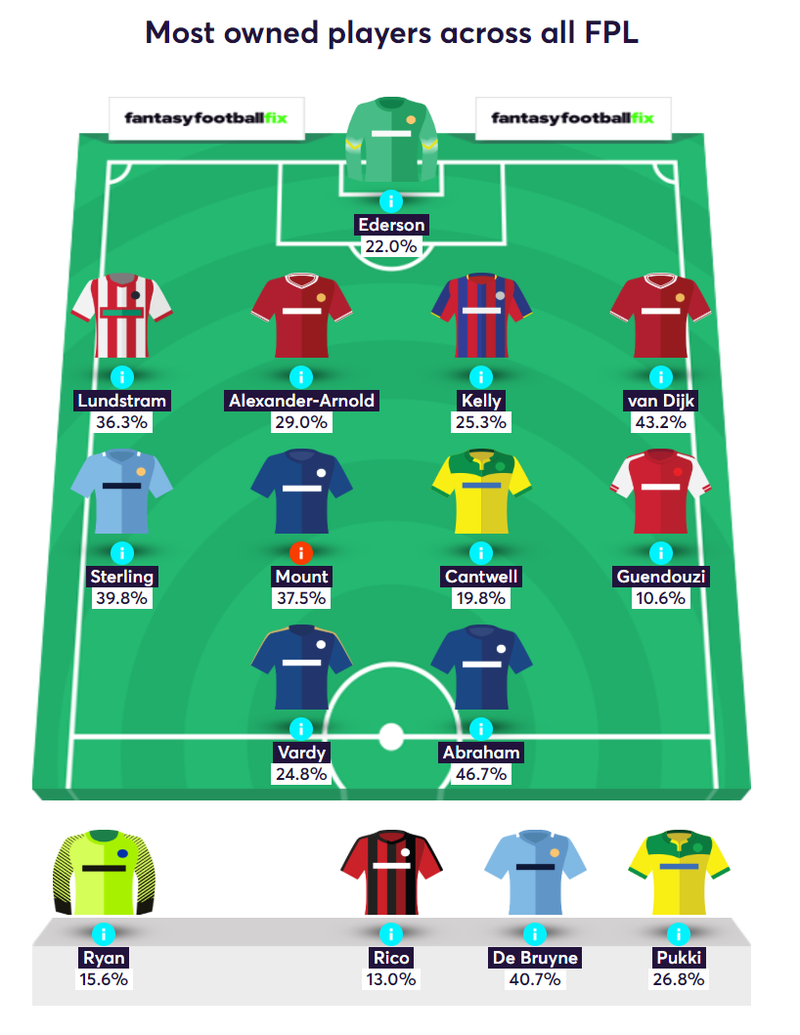 The top of the table clash sees Man City travel to Anfield in gameweek 12, a venue where Salah very rarely fails to impress. As the Stats Sandbox shows, no player has scored more than his five goals during home matches this season, while only De Bruyne (49) has amassed more than his 45 FPL points; that’s an average of nine points per game for the Egyptian. The 27-year-old also leads the way with 11 SoT and 4.29 expected goals (xG) on home turf, while only Agüero (24) has fired more than his 22 goal attempts. The Reds are third for ‘big chances’ over the last six gameweeks, trailing only Chelsea (20) and Man. City (32). Only Man. City (100) have taken more SiB over the aforementioned period than their 65. Man. City may have conceded only four goals over the last six but the fact that they allowed opponents 23 SoT is cause for encouragement. They also conceded 10 ‘big chances’. Our Fix Algorithm projects a point score of 4.4 for Salah.

Since recovering from injury, Martial has resumed his ‘Out of Position’ striker role under Solskjaer. As the Stats Sandbox shows, he’s produced five SoT and an xG of 2.24, in the last two gameweeks, to rank top amongst teammates on both accounts. The 23-year-old has amassed three goals and one assist in five league starts this season, averaging 5.4 points per game (not including his cameo against Liverpool). Amongst players who feature regularly for their team, only Agüero (0.88) and Jesus (1.06) can better the Frenchman’s average of 0.75 expected goals (xG) per 90 minutes. Although the Red Devils have only scored five goals in the last six gameweeks, the underlying statistics present plenty of cause for encouragement. They are seventh for shots with 80 and only eight teams have created more ‘big chances’ than their 13. Brighton have allowed their opponents 31 SoT in the last six gameweeks, only seven teams fared worse. They are also eighth worst for ‘big chances’ conceded with 14. Our Fix Algorithm projects a point score of 4.9 for Martial.

Chelsea were denied their first away clean sheet of the season by a controversial, late penalty awarded to Watford in gameweek 11. But the Blues haven’t conceded in either of their last two home matches, restricting Newcastle and Brighton to a combined total of just one effort on target. Azpilicueta ranks sixth amongst defenders with a total of 13 attempted assists this season, while only Robertson (2.13), Digne (2.60) and Alexander-Arnold (4.21) have exceeded his 1.56 expected assists (xA). Only Targett (three) and Alexander-Arnold (six) have created more than his two ‘big chances’ during home matches (amongst defenders). Chelsea have conceded only six goals over the last six gameweeks and both their clean sheets have come in home matches. They restricted opponents to only 36 SiB, the fifth lowest in the league. Palace have scored only seven goals in the last six gameweeks and are third worst for ‘big chances’ with eight. Only Southampton (seven) and Norwich (five) have managed fewer. They are also fifth worst for SiB with 39. Our Fix Algorithm projects a 40% chance of a Chelsea clean sheet and a point score of 4.6 for the Spaniard.