After delivering a 10-point return against Burnley, De Bruyne now faces one of the division’s leakiest sides in Fulham. He has taken 16 shots over the last four gameweeks, only B. Fernandes has taken more (17). No midfielder has created more chances than the Belgian’s 11 over that period. Only Grealish, Ziyech and B. Fernandes (all four) have created more ‘big chances’ than De Bruyne (three). Man. City have scored seven goals over the past four gameweeks and only Villa (eight), Southampton and Chelsea (both nine) have scored more. Villa (65) and Leeds (68) are the only teams to have taken more shots than their 64. Fulham have conceded five goals over the same period, keeping just one clean sheet. The Cottagers have allowed opponents five ‘big chances’ and 18 shots on target (SoT) over those matches. Our Fix Algorithm currently projects a point score of 8.3 for the Belgian.

B. Fernandes has scored four goals in as many gameweeks, no midfielder has scored more over that period. He is top for shots (17) and shots on target (SoT) (seven). He is the fifth-most transferred in player this week as per our Transfer Stats feature. Man. Utd have scored seven goals over the last four gameweeks and only Villa (eight), Southampton and Chelsea (both nine) have been more prolific. Man. Utd have also created the most ‘big chances’ (13) over that period. West Ham have conceded three goals over the last four gameweeks, keeping two clean sheets. Only seven teams have allowed opponents more SoT than their 19. Our Fix Algorithm currently projects a point score of 6.6 for B. Fernandes. 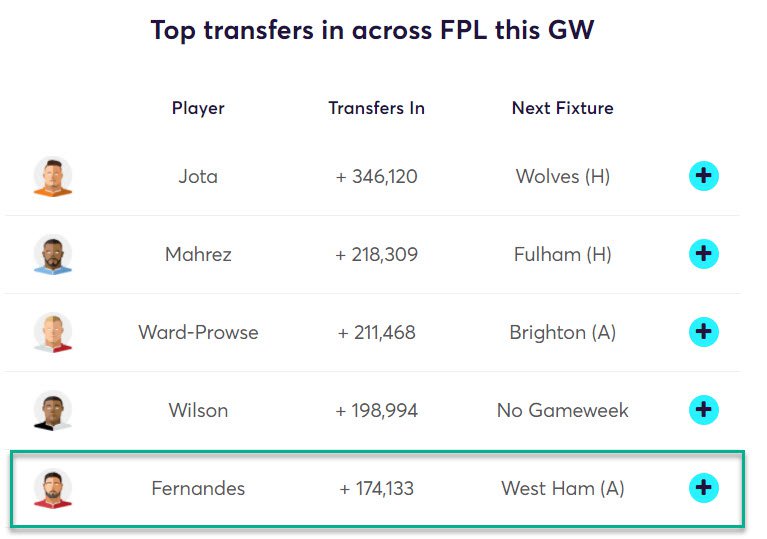 As the Fix Stats Sandbox feature shows, over the last four gameweeks no midfielder has created more chances than Ziyech’s 11. He is also top for ‘big chances’ created with four. Chelsea have scored nine goals over the aforementioned period, more than any other side. Only Villa (25) have landed more SoT than their 24. Leeds have conceded eight goals in their last four matches and no side has shipped more. Only Sheff. Utd (26) and Southampton (27) have allowed opponents more SoT than their 24. Our Fix Algorithm currently projects a point score of 5.8 for Ziyech.